AHMEDABAD: With 2017 being an election year for Gujarat, at least 2 cases of violence have been reported in Gujarat in the last month.

The first casewas in Vadavali village where 2 people died, many were injured and many houses and vehicles belonging to the minority community that was attacked were gutted. The families of the extended part of the village have fled for fear of their lives after the mob attack. The provocation was reportedly an altercation between school children from the two different communities.

The second incidence of violence was reported from Savarkundla town in Amreli district.

With communal tensions increasing, wall writings with Love Jihad slogans have popped up overnight in many places in Ahmedabad. 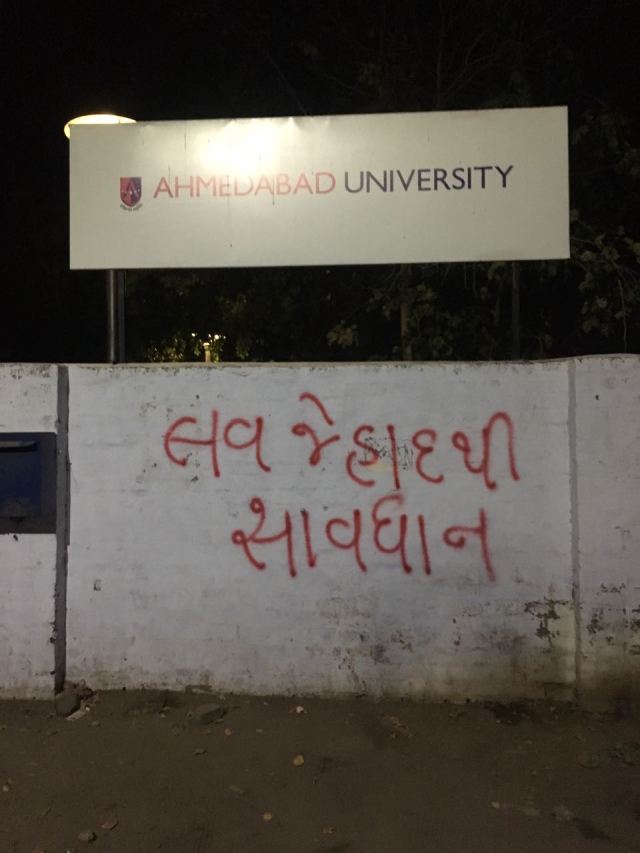 The slogan is written in Gujarati and it says “Love Jihad thi savdhaan” which essentially means “Be cautious of Love Jihad”. These wall-writings were found in multiple places in Ahmedabad including the University area, Usmanpura Underbridge , Navgujarat college, Aroma college, Gujarat Congress Headquarters and Stadium road. 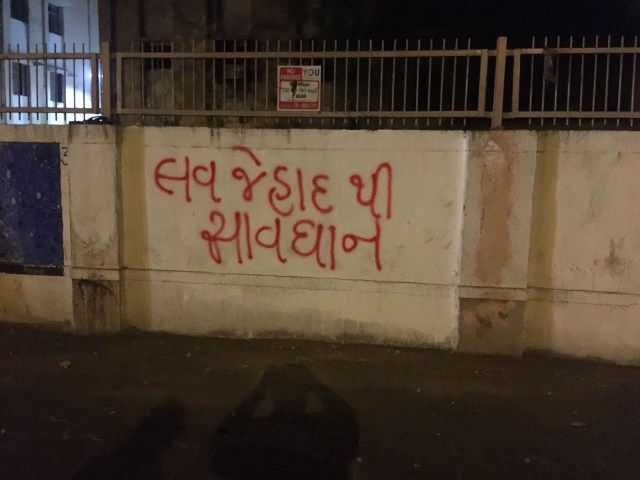 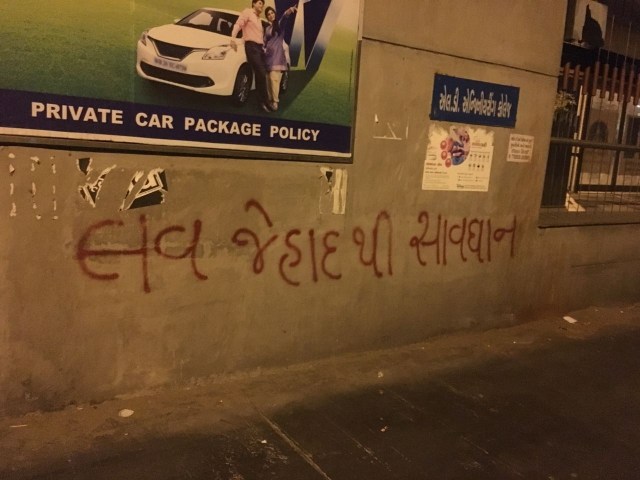 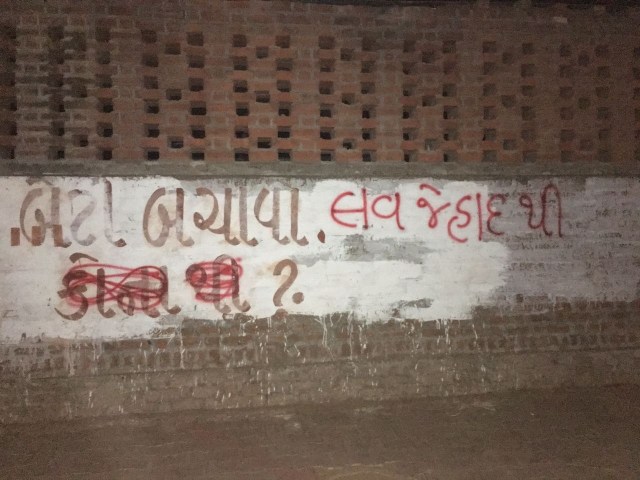 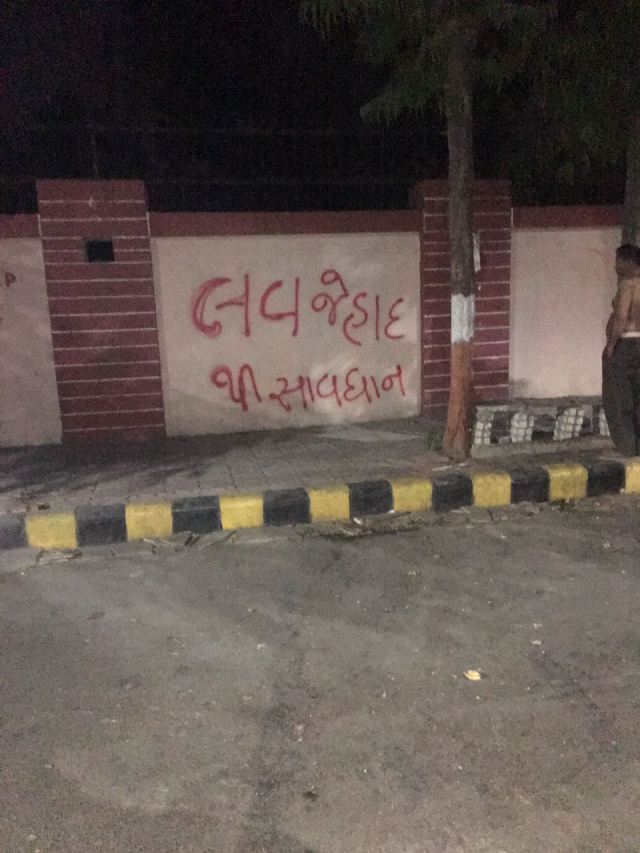 Newsclick reports on the attacks on the minorities:

Police have rounded up only Muslims, a local resident, Yusuf Parmar alleges. Parmar had contacted the DCP Amreli updating him of attempts to disturb the harmony of Savar Kundla and other villages on the night of March 25-26. Meanwhile the mass arson of homes in Vadavali sees smoke still billowing. On the night of March 30, local reports indicate that one Muslim youth has been arrested by the police on allegedly false charges of teasing a non-Muslim girl .Three other Muslim youth have been also arrested on charges of rioting. While the police claim 14 arrests on rioting and attempt to murder, some residents also allege that a VHP leader who allegedly accompanied the Darbars during the attack on Muslim homes has not been named in the FIR.

“The injured are all residents of Vagjipara, an extension of Vadavali village which has about 1200 Muslim households,” says Vankar, who is a Dalit resident of the village and has been arranging food for Muslim villagers left homeless. 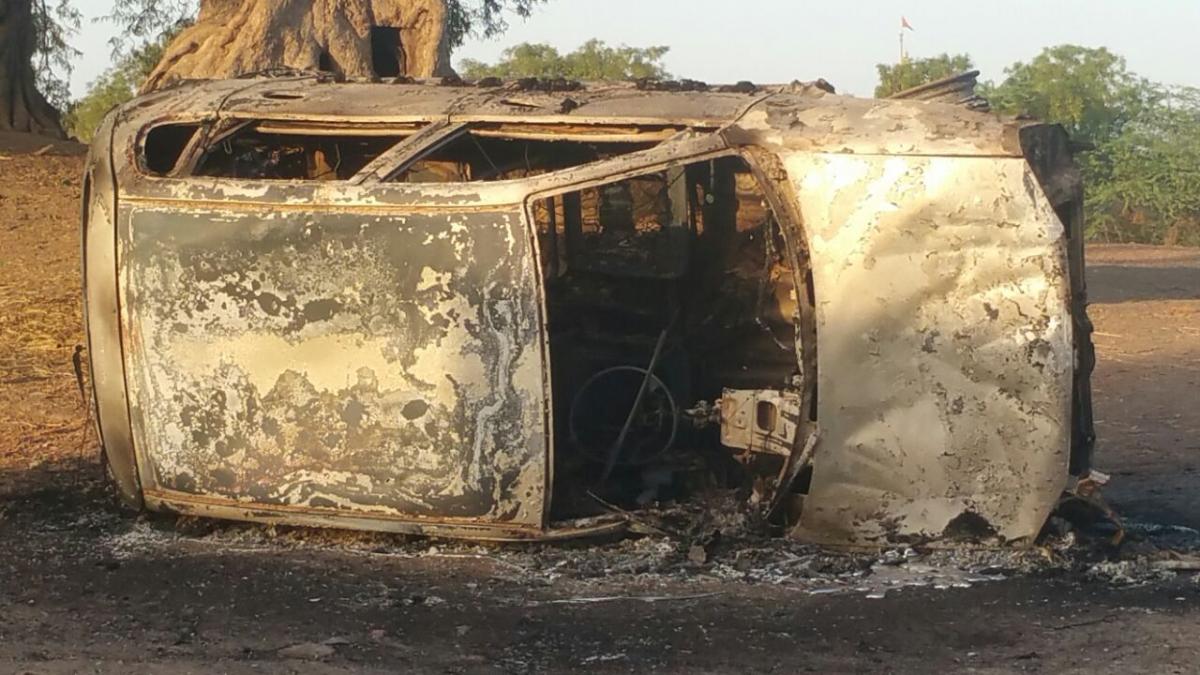 The charred remains are stark reminders of the violence as smoke still billows out from the remains of the homes and barns. Four days after it was razed in a mob attack that left two dead, the village in Gujarat’s Patan district stands deserted. The only people in sight are the police. Muslim villagers have fled from the Chanasma tehsil. The mob attack was triggered by a fight between two students – one from the Thakor (Darbar community) and the other a Muslim – on March 25.

According to the villagers, it was early in the day on March 26, 10-15 Darbars from Sunsar village came to Vadavali and left after abusing and threatening them. In the afternoon, a mob estimated at about 5000 people attacked the residents of Vadavali. Most women and children had taken shelter in a mosque in the village by then. Some of the men, including Qureshi, decided that they would leave the village only after all the others had left, an eye witness said. 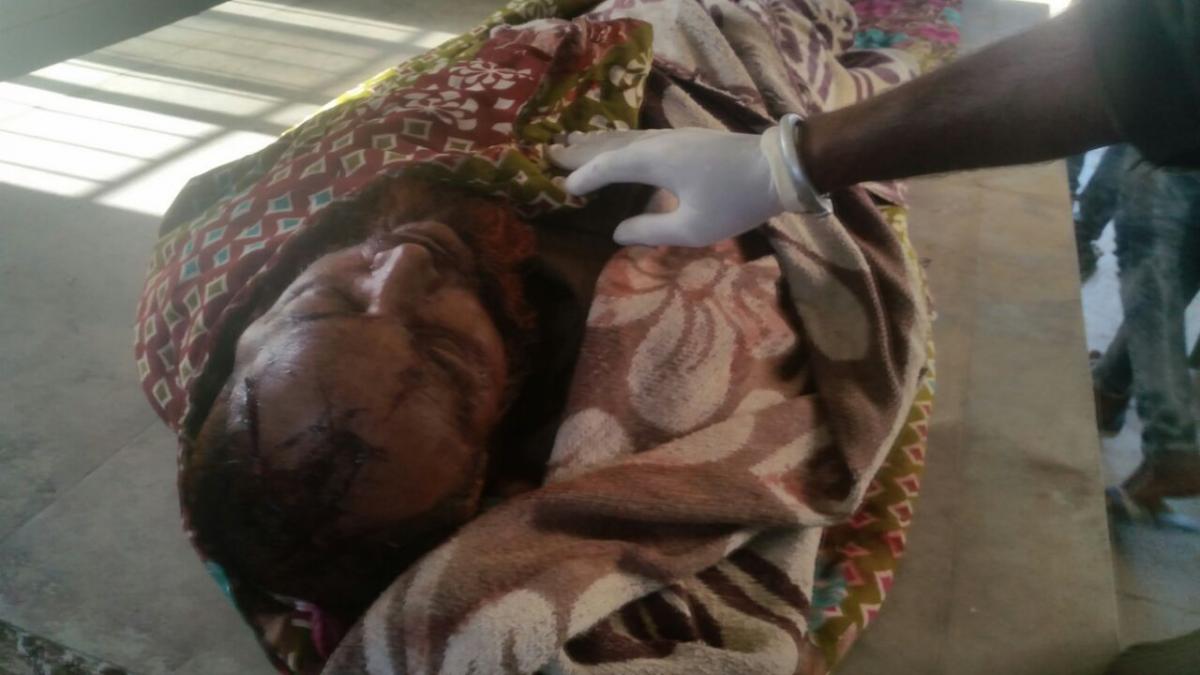 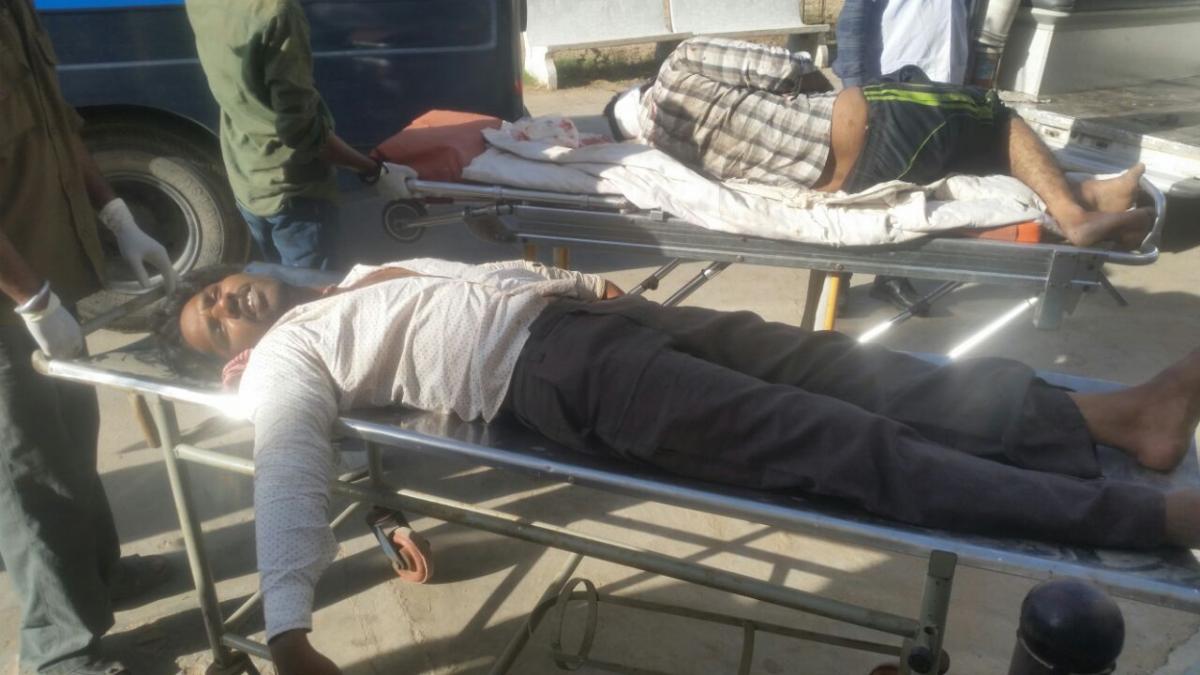 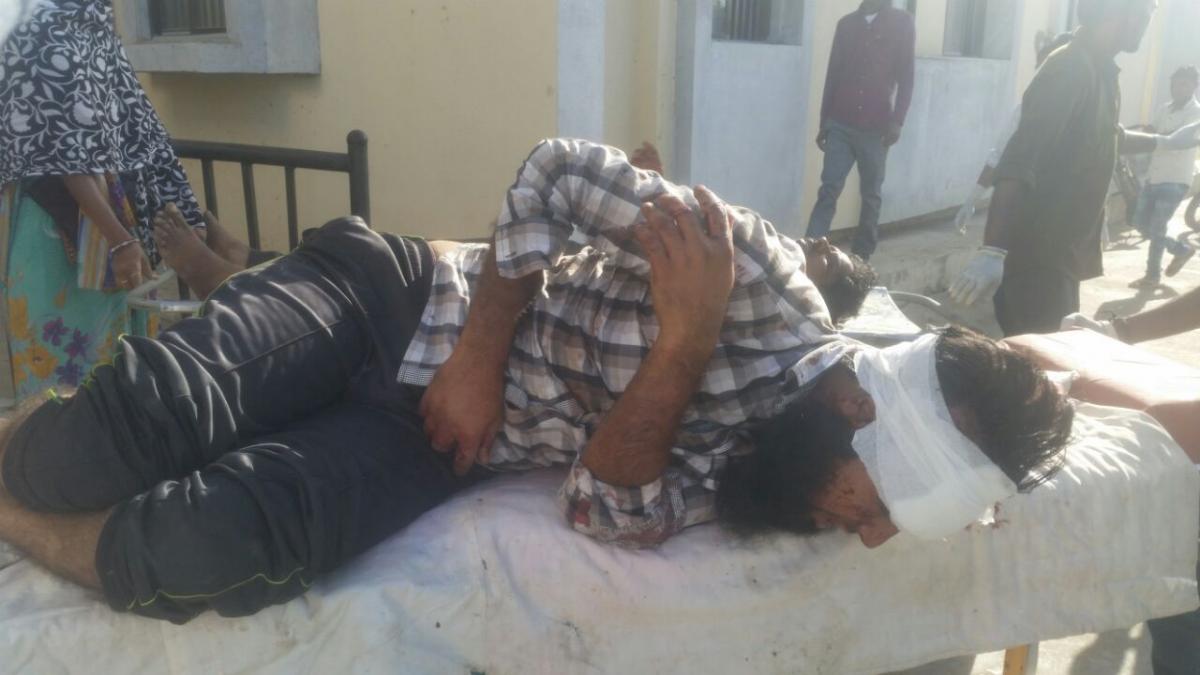 On the following day, a group of people belonging to the Darbar community, mostly from the neighbouring village of Sunsar and two other villages, attacked the Muslims residents of Vadavali. About 80-100 dwellings were ransacked and burnt, food grain was set afire and three shops gutted along with 10-12 vehicles. The dead included a 50-year-old villager, Ibrahimbhai Lalbhai Belim, and a youth who was grievously injured and later succumbed to injuries. About 25 people were injured; five of them are in a critical condition. Pictures shared by the Gujarat Today newspaper, are gruesome.

“The mayhem and madness continued for about an hour and half. If the police hadn’t arrived, more would have been killed,” an elderly Yasqulbhai, a 72-year-old villager, now homeless with his family told Gujarat Today and Sabrangindia. “We tried to intervene and not let the violence escalate, but they did not even listen to the village elders.”

There are, as usual tales of bias and police complicity. “The local (Chanasma police station) police did not help us much. They didn’t even pick up the injured. My father got badly injured and fell down and was left lying there for a long time. I had to run, they attacked me too,” said the son of Belim, the man who died. He himself has a fractured leg and sword injuries on his forehead and right hand and is hospitalised.

“They did not just attack. They also looted every house, burning them down. Many households had jewellery for upcoming marriages next month. And they looted our cattle and grain,” said a woman of the village.

“I was cooking lunch, I had to run for my life as they attacked,” she added.

On March 25, board examinations had been scheduled. “After the exams, students of Class X were coming out of the examination centre when one Darbar boy bumped into a Muslim boy. The Darbar kid happened to fall off a staircase. This is all that had happened on Saturday,” recounted Narendrabhai Vankar, a teacher in a local school in Chanasma. 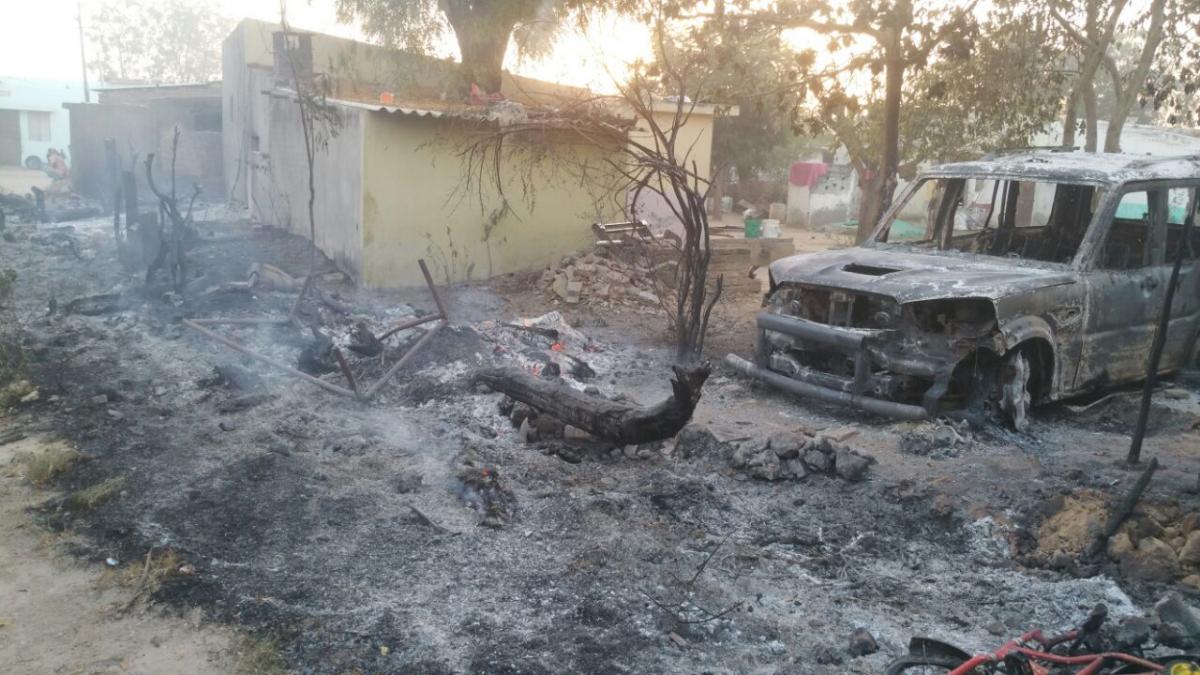 There are several complaints and counter-complaints have been filed by the people. A complaint by a man identified as Maharsinh Zala alleged that a Muslim boy from Vadavali pushed a girl from Sunsar village, leading to a fight. In another complaint, a Vadavali resident, Rehmanbhai Mallick, blamed the Thakors or Darbars for the violence. In his complaint, Mallick stated that agricultural produce worth several lakhs of rupees was either looted or destroyed during the attack. 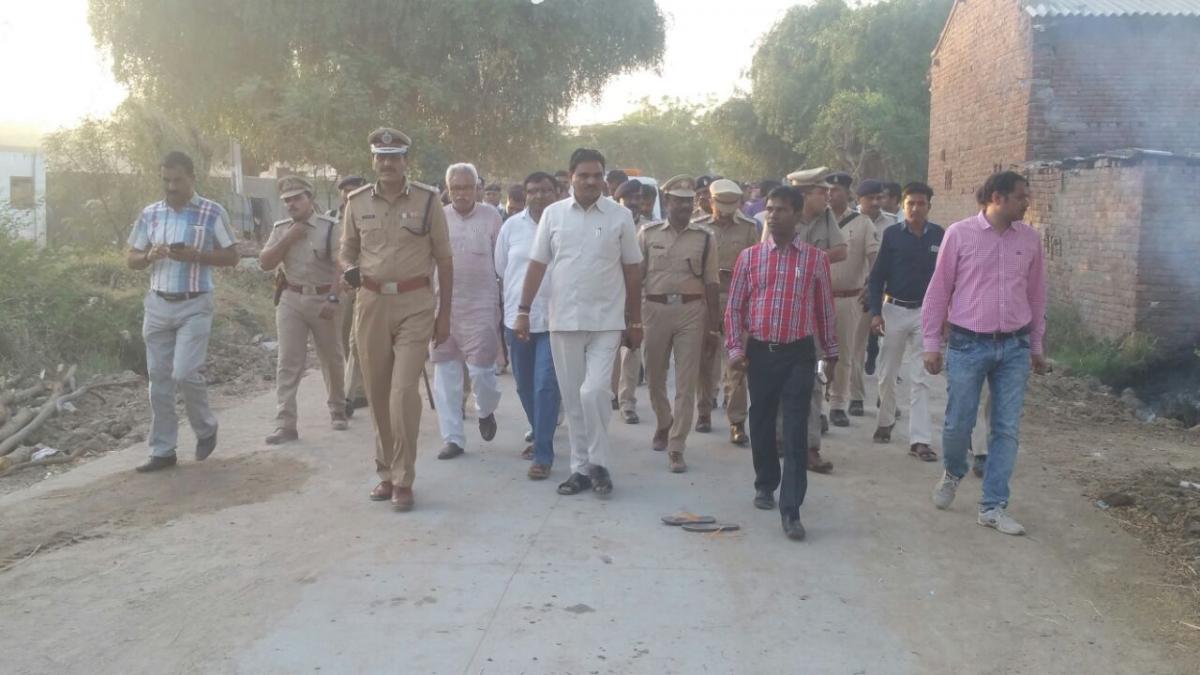 This is not the first time that communal violence has broken out in Patan district. On November 25, 2014, a clash over Rs 10 led to violence between Muslims and members of the Koli Patel community. Following the clashes, security has been beefed up in and around Vadavali. In 2002, too this district had violence against the minorities when sitting MLA S Chordhury had allegedly fired killing two persons from the minority community.

“A combing operation is being carried out in Vadavali, Sunsar and Dharpur and about 150 personnel from Patan district headquarters and Banaskatha district have been sent to Vadavali to maintain peace. The situation is peaceful as of now and we are trying to identify the accused,” AG Chauhan, Superintendent of Police (SP), Patan, said in a statement to the local media. 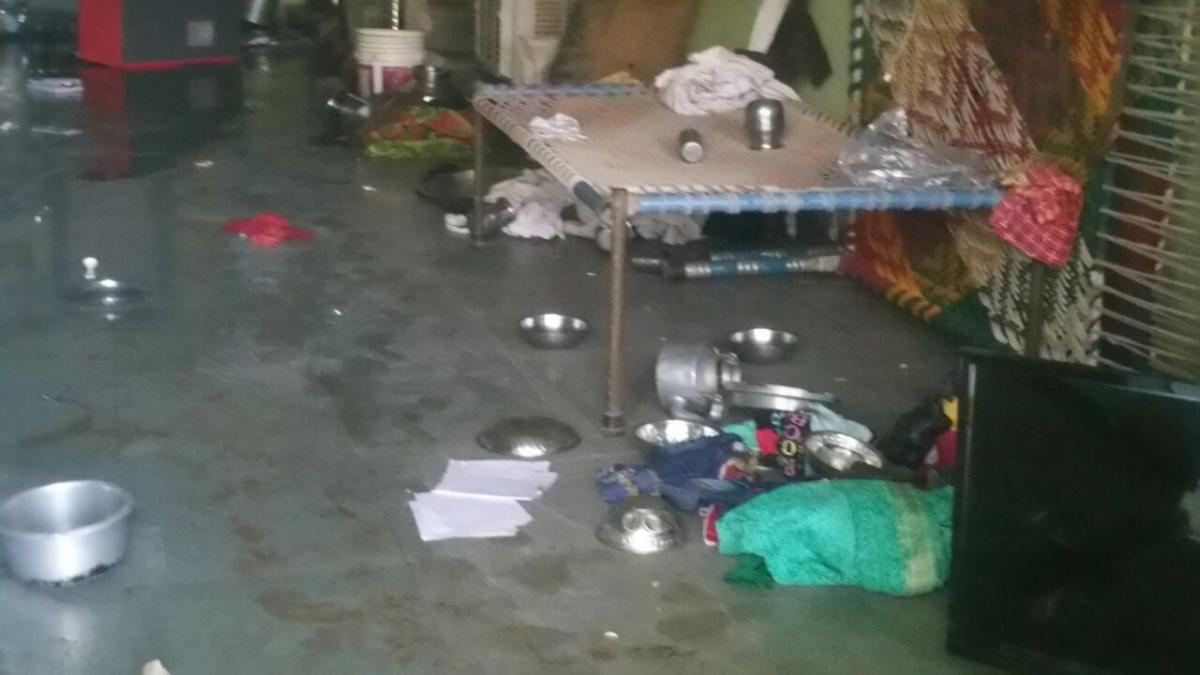 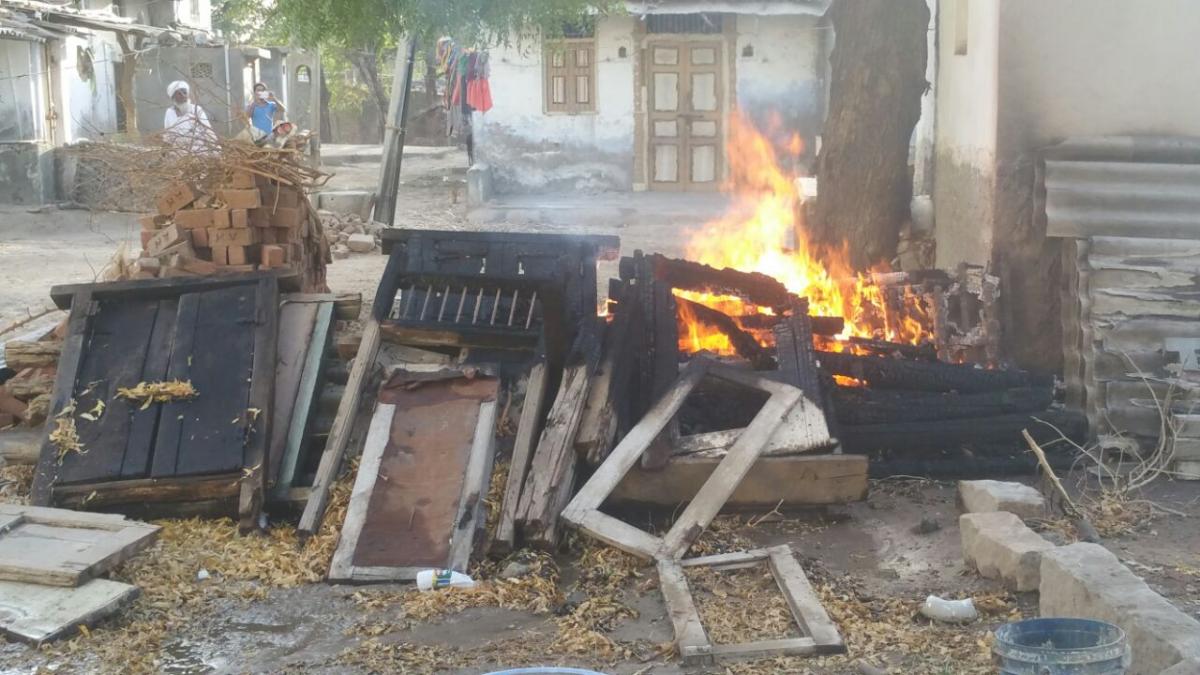 Police from Mehsana and Patan were the first to reach the spot. More forces were sent when the situation worsened. Ten fire engines were sent from Mehsana, Gandhinagar and Ahmedabad to Vadavali to control the arson.Gujarat Director General of Police (DGP) PP Pandey has ordered an officer of inspector general rank from Gandhinagar to be present on the spot. Two companies of the State Reserve Police have also been stationed.