In India, close to a million Dalit women work as manual scavengers: labourers who are forced to empt

NEW DELHI: As India paid glowing tributes to Bhimrao Ramji Ambedkar, the architect of its constitution and a champion of the downtrodden, on his 122nd birth anniversary last month, public attention also swivelled to the glaring social and economic discrimination that plagues the lives of lower-caste or ‘casteless’ communities – who comprise over 16 percent of the country’s 1.2 billion people.

The Right to Equality – enshrined in the Indian Constitution in 1950 – guarantees that no citizen be discriminated on the basis of religion, race, caste, sex or place of birth. The Scheduled Castes and Scheduled Tribes (Prevention of Atrocities) Act of 1989 further lays down a penalty of imprisonment from six months to a year for violators.

Yet, despite constitutional provision and formal protection by law, the world’s largest democracy is still in the grip of what erstwhile Prime Minister Manmohan Singh described as “caste apartheid”: a complex system of social stratification that is deeply entrenched in Indian culture.

For millions of Dalits, or ‘untouchables’, existing at the bottom of India’s caste pyramid, discriminatory treatment remains endemic and continues to be reinforced by the state and private entities.

A 2014 survey by the National Council of Applied Economic Research (NCAER) revealed that one in four Indians across all religious groups admitted to practising untouchability.

This heinous practice manifests itself in multiple ways: in some villages, students belonging to higher castes refuse to eat food cooked by those who fall under the Dalit umbrella, which encompasses a host of marginalised groups.

In parts of the central state of Madhya Pradesh – which researchers say is one of the worst geographic offenders when it comes to untouchability – Dalit children are ostracised, or made to sit separately in school and served food from a distance.

A detailed study of the Sarva Shiksha Abhiyan, a government-sponsored programme aimed at achieving universal primary education, found three kinds of exclusion faced by students protected under the Scheduled Castes and Scheduled Tribes (SC/ST) Act — by teachers, by peer groups and by the entire academic system.

This includes “segregated seating arrangements, undue harshness in reprimanding SC children, excluding SC children from public functions in the school and making derogatory remarks about their academic abilities”, among others.

India’s infamous caste system, considered a dominant feature of the Hindu religion and widely perceived as a divinely-sanctioned division of labour, ascribes to Dalits the lowliest forms of menial labour including garbage collection, removal of human waste, sweeping, cobbling and the disposal of animal and human bodies.

Data from the 2011 census reveals that some 800,000 Dalits are engaged in ‘manual scavenging’ – though someestimates put the number at closer to 1.3 million.

Despite enactment of The Employment of Manual Scavengers and Construction of Dry Latrines (Prohibition) Act of 1993, which provides for punishment, including fines, for those employing scavengers, hundreds of thousands of Dalits continue to clear human waste from dry latrines, clean sewers and scour septic tanks and open drains with their bare hands. 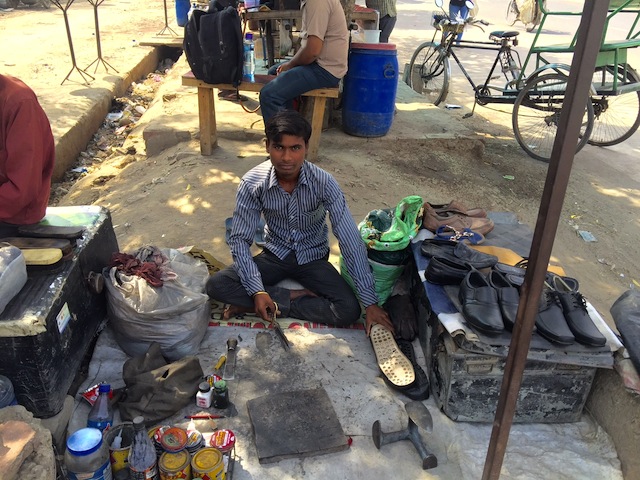 Dalits have historically been condemned to perform the lowliest forms of manual labour, from cobbling to garbage collection. Credit: Neeta Lal/IPS

In a blatant violation of this law, several Government of India offices continue to have such labourers on their payrolls. The majority of manual scavengers are women, who are forced to carry the waste on their heads for disposal in dumps, generally situated on the outskirts of towns or cities.

Over the years, scholars, researchers and academics have echoed what the members of the Dalit community already know to be true: that caste in India largely determines the limits of a person’s economic, social or political life.

Beena J Pallical, a member of the National Campaign on Dalit Human Rights, an umbrella group comprising various Dalit organisations, told IPS that even in the 21st century Dalits still remain the most vulnerable, marginalised and brutalised community in India.

“There is systemic and systematic exclusion of this class mainly because the political will to empower them is missing despite a raft of policy guidelines,” she said.

From as far back as India’s fifth Five-Year Plan (1974-75), provision has been made for channelling government funds into services and benefits for scheduled castes.

Schemes like the Tribal Sub-Plan (TSP) for Scheduled Tribes and the Scheduled Caste Sub Plan were introduced to allocate portions of the government’s yearly budget proportionate to the size of each demographic in need of state funds. Currently, scheduled castes comprise 16.2 percent of the population, while scheduled tribes now account for 8.2 percent of the population.

However, despite these policy guidelines, successive Indian governments have consistently ignored laws on allocation and lagged behind on implementation. According to Dalit activist Paul Divakar, analyses of federal and state budgets reveal that denial, non-utilisation and diversion of funds meant for the upliftment of scheduled tribes and castes are fairly routine practises.

“This clearly demonstrates that economic development of this [demographic] is not the government’s priority,” Divakar told IPS. “The Dalits continue to lag behind because of non-implementation of policies and lack of targeted development, which should be made punishable under Section 4 of The Scheduled Castes and Scheduled Tribes (Prevention of Atrocities) Act, 1989.

“A majority of these people continue to languish in extreme poverty and unemployment because of their social identity and lack of resources. A holistic state intervention is vital for their all-round development,” he added.

According to the National Crime Records Bureau (NCRB), a crime is committed against a Dalit by a non-Dalit every 16 minutes; every day, more than four untouchable women are raped, while every week 13 Dalits are murdered and six kidnapped.

Dalit women and girls, far removed from legal protections, also continue to be exploited as ‘temple slaves’ – referred to locally as ‘joginis’ or ‘devadasis’. In a practice that dates back centuries in India, Dalit girls – some as young as five years old – believed to be born as ‘servants of god’, are dedicated in an elaborate ritual to serve a specific deity.

Bound to the temple, they are forced to spend their childhood as labourers and their adult life as prostitutes, although the custom was outlawed in 1989.

Twenty-seven-year-old Annamma* a jogini at a temple in Tamil Nadu, recalls how men (including priests) raped her for five years before she managed to escaped to a women’s home in New Delhi last month.

“It was as if I wasn’t even a human being,” she told IPS. “Men would shuffle in and out of my room at night as if I had no right over my body, only they did. It broke me down completely.”

In Sanskrit, the word Dalit means suppressed, smashed, or broken to pieces. Sixty-seven years after India’s independence, millions of people are still being broken, physically, emotionally and economically, by a system and a society that refuses to treat them as equals.