NEW DELHI(IPS): In a bid to overhaul the country’s child labour laws, the Indian government has banned the employment of children below 14 years of age in various commercial ventures, while permitting them to work in family enterprises and on farmlands after school hours and during vacations.

“In a large number of families, children help their parents in occupations like agriculture and artisanship. And while helping the parents, children also learn the basics of occupations,” stated a note by the Union Cabinet, which approved an amendment to the Child Labour (Prohibition and Regulation) Act of 1986.

The Act defines 64 industries as hazardous, deeming it a criminal offence for children to employed in any of them. While parents or guardians will not face any punishment for the first offence, a maximum fine of about 150 dollars will be levied for the second and subsequent offences.

The new amendment will, however, permit kids to work in “non-hazardous” businesses, the entertainment industry (including films, advertisements and TV serials) and sporting events from the 18 occupations and 65 processes specified under the 1986 law.

The government’s directive has triggered a raucous debate on the subject in India at a time when public opinion is overwhelmingly in favour of a complete ban on all types of employment for children.

Indian Nobel laureate Kailash Satyarthi, who helms the child rights non-profit organisation Bachpan Bachao Andolan, has been calling for a ban on every form of child labour in India for kids up to 14 years of age.

Activists fear that the provision allowing children to help out in domestic or family-based occupations will enable families to flout or skirt the new law.

“The new amendment will push millions of innocent children into forced labour and deprive them of education and a normal childhood,” Rakesh Slenger of Bachpan Bachao Andolan told IPS. “The girl child will be particularly disadvantaged as she will be denied education while being stuck with all the household work.”

Experts also fear this loophole violates the spirit of the United Nations Convention on the Rights of the Child, which India signed and ratified in 1992.

The worst off will be kids from marginalized backgrounds who need to equip themselves with an education and job skills in Asia’s third largest economy to brighten their employment prospects.

The government’s contention that once the law is changed it will help impoverished families earn a living while equipping children with job skills is also myopic, say child rights crusaders. They emphasize that India’s poor law enforcement system and weak policing standards will hinder efforts to keep tabs on exploitative families.

Others say this gap in the law will reverse India’s gains in moving children from workplaces into classrooms in line with the Millennium Development Goal (MDG) target of achieving universal primary education by the end of 2015.

It will also contravene the Right to Education Act (RTE) 2009, which guarantees a child the right to complete his or her elementary education even after the age of 14.

Experts also allege the government is overlooking the fact that even in household enterprises, children still remain vulnerable to exploitation and health hazards, which impacts their education.

Others have raised a red flag about the possibility of children being pushed into work in the entertainment or sporting industry by ambitious parents. 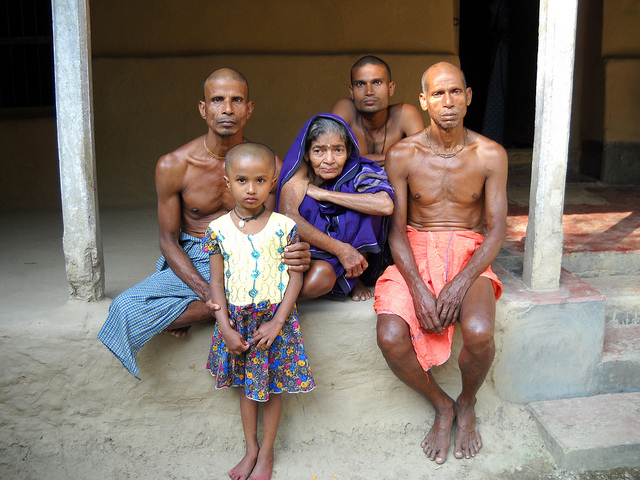 Activists in India are up in arms over the government’s amendment to the country’s child labour law, which allows children under the age of 14 to work in certain designated ‘family businesses’. Credit: Manipadma Jena/IPS

India would do well to heed this warning. The country has the dubious distinction of hosting the largest number of child labourers in the world.

The 2011 census puts the number at 4.35 million working children in the 5-14 age bracket. One in every 100 full-time workers in India is under the age of 14, and a third of those child workers are under the age of nine.

This augurs ill for a country of 1.25 billion people, 42 percent of whom are children. Already, many kids are at risk of languishing in an endless cycle of poverty – an estimated 23 percent of the population survives on less than 1.25 dollars a day – particularly since the government slashed the budget allocation for the ministry of women and child development by 1.5 billion dollars this year.

Activists say this move could deprive millions of marginalised Indian kids the chance to turn their lives around.

According to a report by the Ministry of Labour, Indian child workers are engaged in a wide range of hazardous and stressful occupations.

Kids in the agriculture sector are made to carry heavy loads and sprinkle harmful pesticides on crops. Last October, a blast at a cramped firecracker-manufacturing unit in the East Godavari district of the southeast state of Andhra Pradesh left almost a dozen people dead, including many children.

Worse, production of beedis involves prolonged exposure to tobacco leaves, which can cause life-threatening diseases like tuberculosis, chronic bronchitis, asthma and malnutrition among others.

So-called “family enterprises” are no better, say experts. This includes such industries as matchbox making, carpet weaving and gem polishing. In these sectors, where child labour is in high demand, police raids have highlighted inhumane conditions in which children are made to work for no pay, with scant food and no access to toilets.

“A closer scrutiny of the government’s [amendment] reveals that children of all ages may in fact be used for labour in some of the most hazardous industries in the country. The Cabinet’s idea of striking a balance between the need for education for a child and helping parents to earn better incomes makes no sense,” says Amod Kanth, founder of Prayaas, a non-profit working for children’s welfare.

According to the social activist, relaxing legislation on child labour as a means of alleviating poverty is a deeply flawed strategy. “The move will nullify whatever progress the country has made in getting children out of forced labour and into school. As it is government surveys are known to under-report child labour. If child labour is legalised, the situation will spiral out of control,” Kanth told IPS.

Even a report by the Parliamentary Standing Committee On the Child Labour Amendment Act underscores the fallacy of the government proposing to keep a check on children working in their homes.

“The Ministry is itself providing loopholes by inserting this proviso since it would be very difficult to make out whether children are merely helping their parents or are working to supplement the family income. Further, allowing children to work after school is detrimental to their health, as rest and recreation is important for fullest physical and mental development in the formative years, besides adversely affecting their studies,” states the report.

Rather than going in for piecemeal amendments to current laws, activists say the government should revamp the flagship 1986 Act itself, which has failed to curb child labour effectively.

A new beginning will also pave way for the rehabilitation of millions of children rescued from exploitative industries or households, they say.

The Kashmir Walla 23 hours ago

The Old New Faith in Arunachal Pradesh - II 23 hours ago

‘Deep Disquiet About Planting of Digital Evidence’ 1 day ago

The Ostrich and the Storm 1 day ago