“Gouri Hari Dastan Was A Life-Changer For Me”: Ananth Mahadevan

Ananth Mahadevan outside the window the camera on a rostrum

Gour Hari Dastan is a different kind of biopic on a revolutionary whose life story jumps at you as if from the pages of an Indian Ripley’s Believe it or Not. It does not raise slogans. Nor does it shout about the freedom fighter from the rooftops or raise flags or make candlelight marches. It is an extremely low key film because the person it portrays through a ficitonalised account of his life is low-key and prefers to vanish against the wall behind him. The actor-turned-scriptwriter-turned-editor-turned-filmmaker Ananth Mahadevan talks about his film.

Excerpts from an interview with Shoma A. Chatterji:

How did you discover this great man Gour Hari Das who most of us had never heard of before?

I read about Gour Hari Das in a tabloid. The headline screamed, "It took him 32 years to prove that he is a freedom fighter”. The irony was there for all to see. I probed further and traced him down to a distant suburb of Mumbai...Dahisar.

What motivated you to make a film on this man for whom protest and assertion of one's rights assumes new meanings?

This was a very different kind of fight. It was a fight to prove that the past was not all a dream. That it was the only truth he lived for. And this was happening in a country he fought for. A man who exuded sympathy and yet did not crave for it. This was a great cinematic character for me...larger than life yet so rooted. 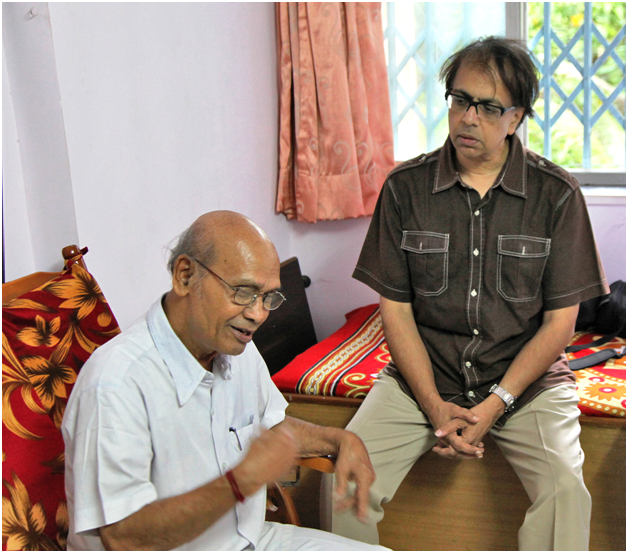 When you met him for the first time, what was your reaction and what feelings did you come away with?

He was surprised that someone wanted to make a film on him. His humility was exemplary. There was so much to learn from this man. Could one carry forward the Gandhian principles he was brought up on into a country that teased and frustrated him? Gour Hari Das proved that one could.

What is it that inspired you to make an entire full-length feature film on this great man and why not a documentary since he is still alive and lives in Mumbai?

The man's life was so bereft of drama that it was asking to be converted into a feature film. Moments that were understated, yet so impactful were fodder for my script. And the man held a mirror to a flawed system of our own making. At once this was a personal and a political statement. And it fired up the film maker in me.

What kind of liberties did you as director take with his original story and how?

When making a film on a living person, that too an honest, good man like Gour Hari Das, one cannot take too many cinematic liberties, except dramatising the events in his life. Actors would play the part and the script would interpret the scenes as closely to real life as possible. So all characters who played an important part in his journey were retained and an uncompromising film made without pandering to popular tastes as most biopics do.

Have you worked with Vinay Shukla before? What decided you to cast him in th title role and what kind of brief did you give him?

Vinay Pathak, I worked with for the first time. I wanted a lead actor whose personality would not be too dominant on screen.He had to look vulnerable and feeble yet possess an inner strength that could shake up an establishment. Vinay studied Das closely and interpreted him without impersonating him. And that was the triumph for him as an actor.

What kind of director are you - script reading sessions before shooting begins? Or, workshops with the actors? Or, creating the right 'look" for the main actors? Or, giving them specific directions and actually showing htem? Or, allowing them a bit of freedom to improvise which would be tough considering that this is a fictional biopic? A combination? Please elaborate.

It was a combination of workshops, make-overs, rehearsals on sets that included reading and blocking a given scene. Then I would allow the character emerge naturally, honestly and effortlessly. All my actors were thinking actors and the process was useful in letting them create the magic required.

How did the real Gour Hari Das feel about the film?

Das maintained a stoic silence after watching the film. He was keen to see what his family and friends felt. And when they were overwhelmed with emotion, the real impact of the film dawned on him. From watching his own story unfold on screen to reacting to it like a third person, the journey came full cycle for Das.

The anti-climax - Das quietly hands over the envelope to a little girl in the procession that is still marching for 'freedom" - is it a part of the real story or is it a dramatic interpretation?

The final procession of the new freedom movement was a cinematic depiction of Das' belief that the country needs a new revolution. Instead of merely mouthing these words, we gave it a larger picture, literally.

Are you happy when you watch the film today and has it got back the money you put into it since you produced it too?

The film has been a life changing experience for me. The tremendous feedback from India, London, Paris, New York, San Francisco and Canada festivals has been very rewarding. The producers of Mee Sindhutai Sapkal, Bindiya and Sachin Khanolkar have made this film too. It got a limited screen release but should rake in its monies through ancillary rights too.

One Big Family: Bollywood Nepo Culture and the Grand Samaj 30 minutes ago