NEW DELHI: Farmers, unless they paralyse a state as in Haryana recently, do not make the news. Agrarian distress is too poor and rural for the big corporate-advertisement run media and manage just a few paragraphs in the mainstream print media usually with the headline “farmers rally creates huge traffic jams in city.”

Agrarian distress that has taken a huge toll of lives, with cash strapped farmers committing suicide in large numbers across the country, is now also being expressed through protests. Thousands of farmers have been marching from their villages to the state or district headquarters in search of justice with state governments, almost uniformly, continuing to just about ‘manage’ the anger that is growing by the day. Unfortunately, with governments now determining their responses to the television media’s interest or disinterest, as in this case, to specific issues, amelioration of the demands, and a cohesive agrarian policy remain elusive.

2016 has started with huge farmers protests across the country with Maharashtra, Karnataka, Haryana, Punjab, Madhya Pradesh, Rajasthan , Uttar Pradesh, Andhra Pradesh all witnessing demonstrations and protests. Delhi has itself hosted several farmers groups through the first three months of the year with western UP and Haryana farmers marching to Jantar Mantar with a charter of demands. Many of these protests are being organised by political parties and their kisan wings, many others by farmers organisations working on the ground.

The target is usually the government, state and centre, for ignoring the farmers completely. But in February cotton growers marched to the RSS headquarters in Nagpur, threatening to immolate themselves. The issue was specific, but of course part of the larger challenges the cotton growers are facing, in that a buyer had allegedly not paid dues worth Rs 8 crores and was supposedly close to the Sangh. The farmers marched on the busy Nagpur-Raipur highway, shouting slogans, before they were forcibly taken away by the police.

In Karnataka farmers anger against the Congress government started a peaceful protest against the state government’s inaction in tackling the drought, as well as the power crisis . This turned into anger that poured out into the streets of Bengaluru, and the district headquarters across the state, after Chief Minister Siddaramaiah ordered a police lathi charge on the demonstrators.

The anger and the frustration that is growing because of the shrinking farm lands, failure of crops, poor irrigation facilities, bad seeds, drought, debts, were behind the Jat farmers stir in Haryana that pinned itself to the demand for reservation. The farmer youth, unable to cope with the harsh farming realities, are looking for jobs and fast joining the swelling ranks of the unemployed. The Haryana stir that was violent, where many were killed and injured, left the government in panic. The Army was called in to douse the flames, with the state is still under threat of a renewed agitation. The government had almost immediately accepted their demand, and is now on notice by the Jats to implement this.

The signs of distress have been visible for over two decades, with the economic stagnation being overlooked by governments in their agrarian schemes. The average size of a field has shrunk by 60 per cent, adding to the distress now, with the farmers fighting for survival, that is visible in the almost ceaseless turmoil evident in the protests. Farmers do not leave their fields easily to march to the cities, and the continuous protests though being ignored by the media and the government, have been increasing almost dramatically in numbers and frequency.

And most recently in perhaps one of the largest rallies in recent memory, thousands of farmers flooded Nashik in Maharashtra. They were all demanding a loan waiver, and Rs 50,000 per acre for crops that were destroyed in the drought. The farmers, clearly being choked by an insensitive government, said they urgently required intervention to prevent many of the farmers---hit hard by severe drought---from taking their lives. This protest is also supported by the Left affliliated All India Kisan Sabha whose leaders said that will not move back to the villages, until the state government accepts the demands.

The response to the genuine concerns, and the visible anger and anguish of the farmers was perhaps summed up by Prime Minister Narendra Modi at a ‘farmers rally’ in Odisha recently. He claimed that all this was being done to destabilise his government by NGOs as he had asked them to provide detailed accounts of the funds they received, and spent..“They got together and have been conspiring all the time how to finish Modi, how to remove [the] Modi government, and how to defame Modi,” he was quoted in the newspapers as saying.

The crisis, the Kisan Sabha leaders said, is worsening and needs urgent attention. Some photographs of the agitating kisans: 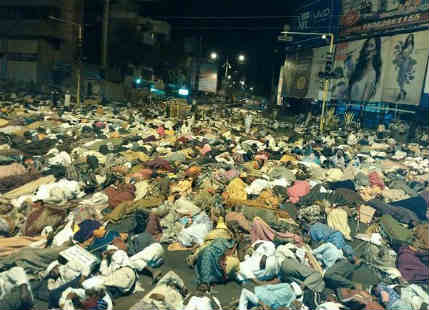 Farmers in Nashik settle in for the long nights, determined not to leave until the government accepted their demands. The stir has been now called off following assurances by Maharashtra Chief Minister Devendra Fadnavis 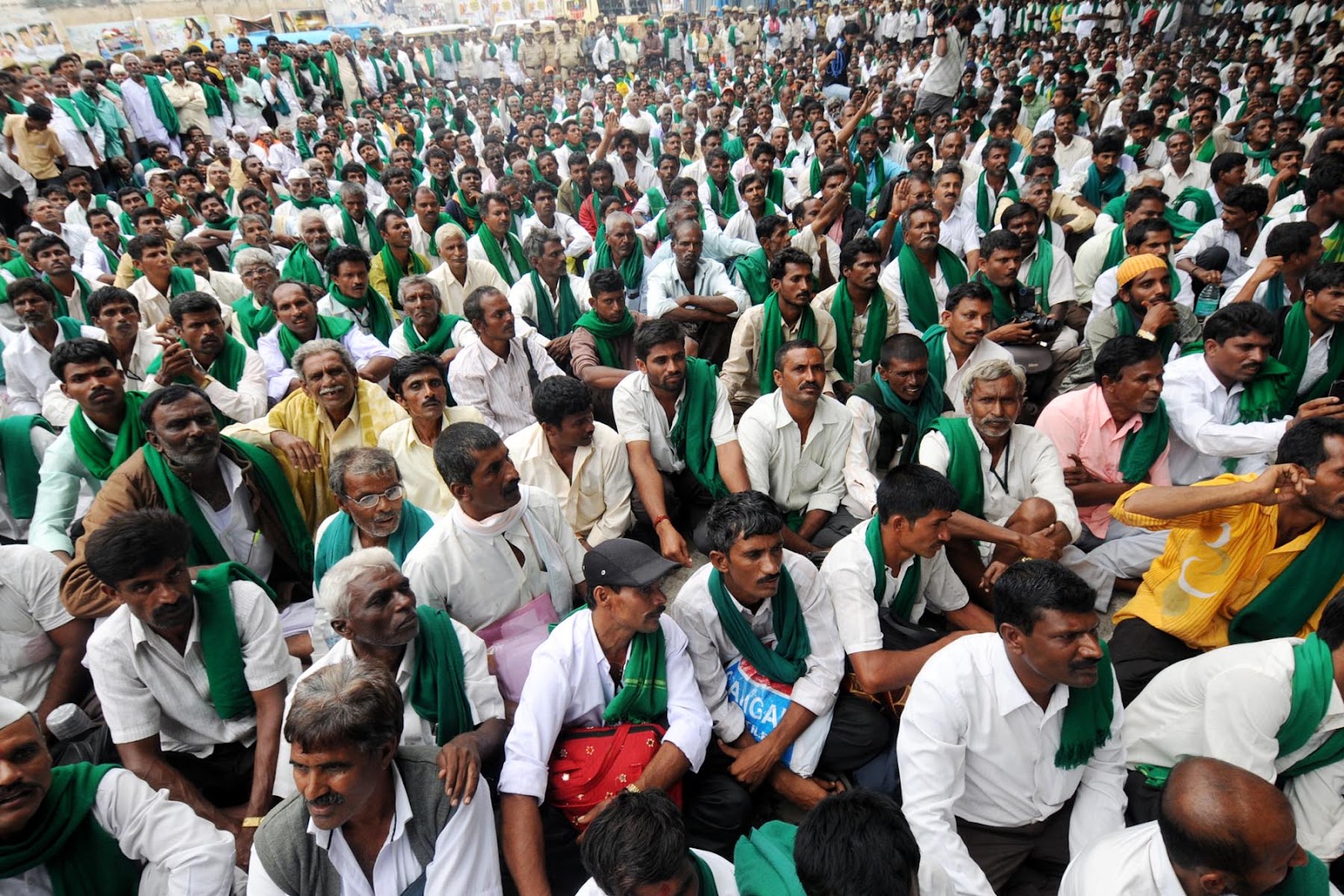 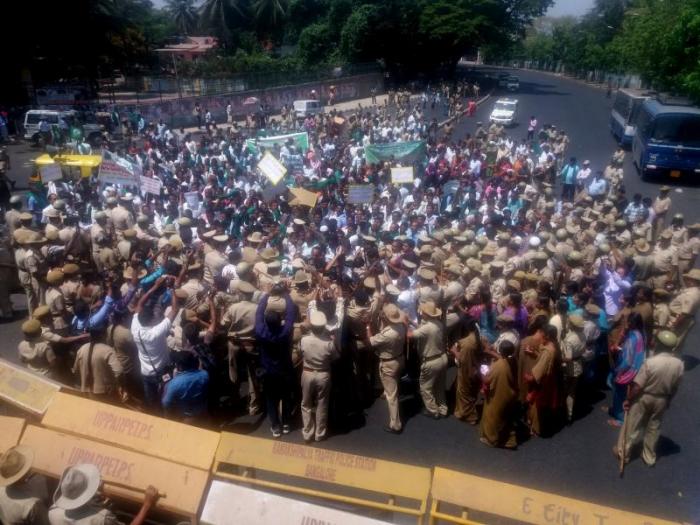 Farmers surrounded by police in Bengaluru 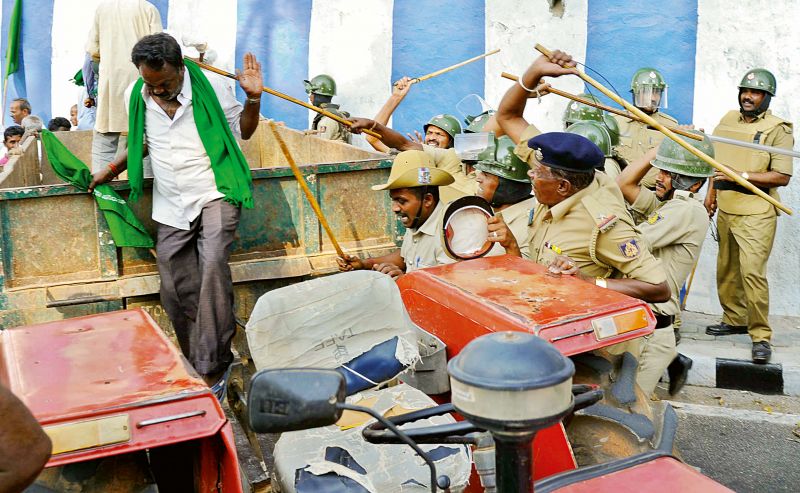 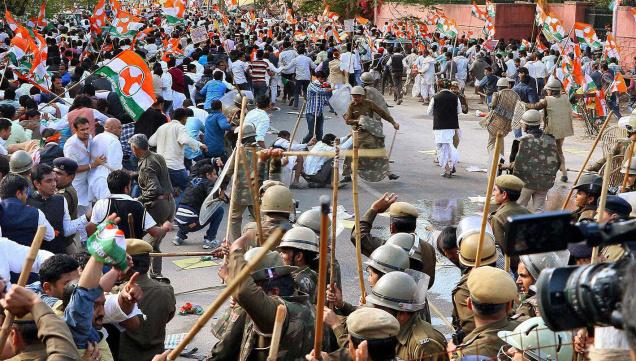 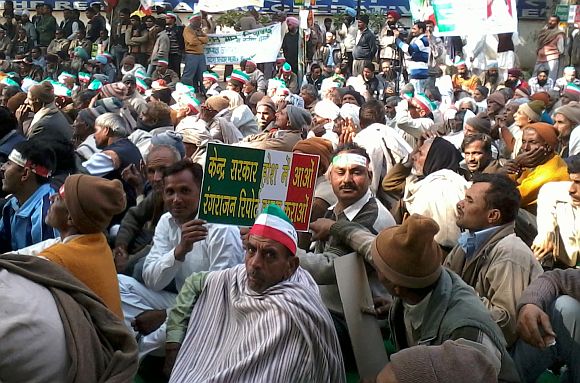 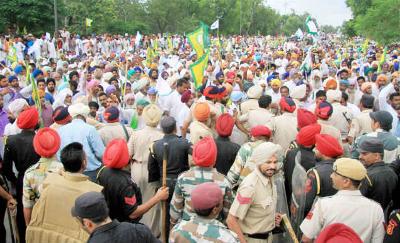