SRINAGAR: With the protests refusing to die down in Kashmir, the precarious situation is taking an ugly turn with an increasing number of educational institutions and vehicles being set ablaze by unknown miscreants across the region.

The latest incident took place on Sunday evening in central Kashmir's Budgam district where a government-run school was set on fire in Aripanthan. Officials said the school was partially damaged in the mysterious blaze.

"The damage to schools is not just burning of an institution but a colossal loss for the entire society. During the last few months Kashmir has gone through a bad phase which has given pain to everybody,” Jammy and Kashmir's education minister, Naeem Akhtar, said in a statement after the incident.

Officials said the incidents of arson are "spreading like wild fire" in Kashmir since the last month with private and passengers vehicles, trucks, educational institutions and even shops set ablaze by unknown miscreants, rattling the state government.

"We are recording incidents of arson almost on a daily basis now. Yesterday, five such incidents were reported from different parts of Kashmir. From shops to passengers vehicles, these miscreants are not sparing anything," a senior police officer said. 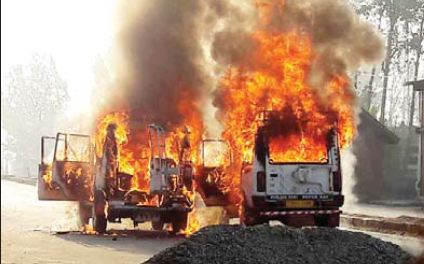 While such incidents of arson have anguished the local population, surprisingly very few police complaints have been lodged by the victims themselves, perhaps either due to the prevailing crisis or the awareness of the political situation on ground.

"If this is the cost of freedom (from India), I am ready to pay it. When police has unleashed a reign of terror on our people, it is absurd to expect us to behave in a normal way," Tanvir Altaf Wani, whose car's front windscreen was smashed by protesters in central Kashmir's Nagam village last week, told The Citizen.

Earlier on Sunday, unknown persons set ablaze a truck in Bijbehara in south Kashmir which is the centre of the prevailing uprising in Kashmir. Reports said the truck was set ablaze on Srinagar-Jammu highway in Pazalpora area of Bijbehara during shutdown hours.

Dozens of such incidents have taken place during past couple of weeks. On Friday night, miscreants set ablaze a school building in Bugam village of Kulgam district. The school building was targeted earlier as well but the alert school guard has sounded an alarm and thwarted the attempt.

On September 19, a historic school was gutted in a mysterious fire in south Kashmir’s Anantnag district. Islamia Hanfia Educational Institute at Lal Chowk in Anantnag was the oldest building in the area.

On September 12, a mob torched a school building in Kupwara district of north Kashmir. The school located at village Wangam-Kralgund, 90 kms from capital Srinagar, was gutted in the blaze in which all the records perished.

Delhi MLAs Met for 12 Days Last Year: What Do Our Representatives Do? 5 hours ago

Covid-19 Has Changed the Indian Wedding Industry 5 hours ago