The Forgotten Story:News Photographer Struggles To Save His Eyes, And His Life

SRINAGAR: For not from the last three months, confined in a dark room of his house, 30-year-old freelance photojournalist Zuhaib Maqbool is living with a blank future.

Maqbool is the victim of the pellet guns used freely by the police against the protestors in Kashmir.

Maqbool made the headlines on September 4 after he was hit in the body and the face by the pellets whle overing the protests in the Rainawari locality of Srinagar. However, he was just a headline as he received no help from either the fraternity or the state authorities.

“I was only a ‘selling’ story at the time. The more days pass, the more I am becoming irrelevant,” he said. He has has gone through three eye surgeries but with no real results. His vision is blurred and he said, “It is like I can see only 5%. There is yet another surgery for lens implant and cornea repair, after that the doctors are hoping further improvement”.

Maqbool is the only son of his father and whatever his family could afford has been already spent on his treatment and medicines. These pellets have changed his life forever. From his active story telling life, he has now been restricted to his mute dark room. He has turned into a story of his own. 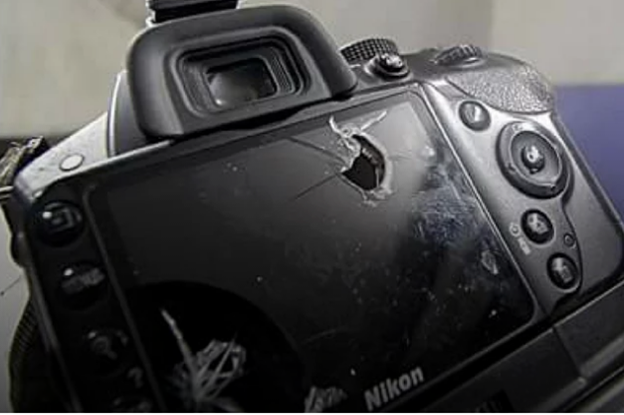 While recalling the incident, he said on September 4 he reached Naidyar Bridge at Rainawari where hundreds of people were staging azadi protests. He took several photographs and as the protests intensified, police burst teargas shells to disperse the protestors. The two sides clashed.

Little did Zuhaib know that this moment was going to change his life forever.

He said that some of those covering the protests, say in an adjacent narrow lane for a brief respite.

“Unexpectedly, I saw a masked cop pointing his gun towards me and I immediately stood up. As he was about to press the trigger, I showed my camera shouting I am from the ‘Press’. In a few seconds, I heard a loud sound with some hot metal objects hitting my body and eyes. I found myself in a pool of blood,” he said.

There was no provocation, he knew that “I was from the media, and yet he fired.” No action has been taken against the cop who fired into Maqbool at close range.

Maqbool has realised through the weeks of surgeries and despair, that there was little by way of help or support for him from the state and the media community. He believes he was ignored because he was not attached to any organisation, but is a freelance journalist.

Ironically this is not a new thing in the Valley where free lance journalists are often in the front taking photographs, but have no protection at all, no insurance, or help if injured or killed. Even those publications who have used their photographs and their stories do not come forward, and like Maqbool are left in the dark.

The loss of vision in the eye is not the only ordeal bestowed by the forces on Zuhaid Maqbool with his body ridden with pellets that cannot be removed. There are pellets in his nasal cavity as well that make him writhe in pain even today, suffering high fever frequently.

For Maqbool though his eyesight is of the utmost importance at this stage. His family does not have the kind of money required for full treatment. And he still lives with hope that somehow his eyesight will be restored. “Those cameras were sort of my eyes”, he said showing pieces of the equipment shattered by the cops.

Maqbools friend and colleague Muzamil Matoo, another photojournalist who was with him on that day, was also hit by pellets on his head. He had to undergo a surgery to remove the pellets from his head.

Another journalist in Kashmir’s Kupwara district, Mir Javid was hit by pellets on August 5. He was standing on the side of the road and was targeted as a hit by the police there.

There are no rules for freelance journalists, particularly those working in conflict szones such as Kashmir in India. They live off what they can sell, and while on duty have no coverage, not even insurance. Journalists bodies too tend to ignore the freelance journalist and news photographer, in favour of those who work full time with media houses. There seems to be no solution in sight.

(Irfan Quraishi is a Kashmir-based broadcast & multimedia journalist. He has previously worked for Day & Night News and Kashmir Times.)