NEW DELHI: In an age where we are drowning in information but lacking in wisdom, technological advances have made it easier to sell a lie. 2016 has been infamous for spreading the phenomenon of “Fake News” which influenced many decisions and opinions all around the world.

The ability of a headline to go viral has come to be of utmost importance as opposed to the news based on facts and truth. It has become hard for the reader or the viewer to separate between actual news and propaganda and lies.

The widespread effect of social media and its relevance as a news platform has been highlighted this year, weakening the control of traditional media. One of the grand examples of propaganda being served as news to influence people is the US elections 2016.

The most shared news stories during the election were fake stories, “Pope Francis shocks world, Endorses Donald Trump for president, releases statement”, “It’s over: Hillary’s ISIS email just leaked and it’s worse than anyone could have imagined”, “Just read the law: Hillary is disqualified from holding any federal office”, all these stories came from a fake news website named Ending the Fed, which started earlier this March and has no listed owner. Many of these stories were believed by the readers. Many websites observed a spike in their traffic after publishing fake news. 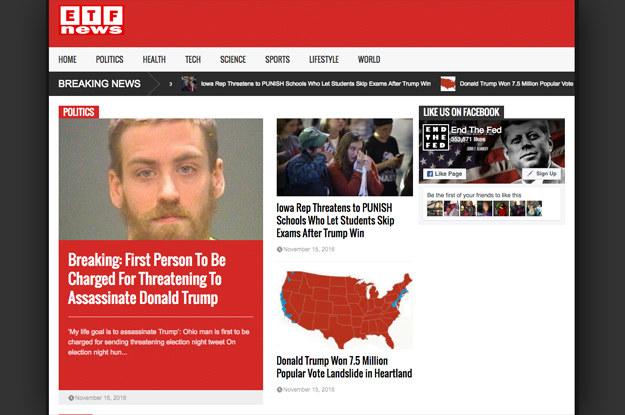 According to a Buzzfeed Analysis, the most famous headline of fake news generated engagement of 960,000, a story by Ending the Fed; the mainstream media’s most well-known story was, “Trump’s history of corruption is mind boggling. So why is Clinton supposedly the corrupt one?” by The New York Times which gained traction of 849,000 which was a good 111,000 less in readership.

Facebook has been a significant tool in spreading fake news with an air of authenticity that finds many takers on the social media. Almost 44% Americans get their news from Facebook. So, the traffic through Facebook and other social media helps these partisan sites to gain viewership and correspondingly money from advertising.

Sometimes misinformation is also spread by careless citizens and the media itself. In the case of Eric Tucker, who had 40 twitter followers, his post about paid protestors being carried in buses for demonstrations against Donald Trump went viral. The truth was that there was a conference in Austin for which the buses had been brought. The post had 16,000 retweets and 350,000 Facebook shares.

Barack Obama in a recent speech addressed the issue and said, “if we are not serious about facts and what’s true and what’s not” and “if we can’t discriminate between serious arguments and propaganda, then we have problems.” He also stated that "And people, if they just repeat attacks enough, and outright lies over and over again, as long as it's on Facebook and people can see it, as long as it's on social media, people start believing it. And it creates this dust cloud of nonsense.”

The weapon of lies disguised as truth has been a worldwide phenomenon. In India, doctored videos have been a cause of concern resulting in rift and violence in the country. In September 2013, a leading India news channel Aaj Tak ran a doctored video of a fake sting operation where a Cabinet Minister was seen telephoning officials, asking them to be lenient towards the accused in the Muzaffarnagar Molestation case. This caused large scale violence in the city and an Uttar Pradesh government committee was later set up which indicted the channel for promoting enmity between different groups during the riots.

Earlier this year, a doctored video of JNU students screaming “anti-national” slogans led to a huge furore. The commotion was caused by mainstream media channels playing the video over and over again, that was used to justify the arrests of students in the University on charges of sedition.

In India, Whatsapp has become a strong medium to spread misinformation passing as catchy news. 2016 had Prime Minister Narendra Modi being declared the best Prime Minister by UNESCO, ‘Jana Gana Man’ as the best national anthem, and the new Rs.2000 note as the best currency. UNESCO had to step in and pronounce that no such statements had been made.

Widespread messages of the new currency being tracked by a GPS chip or Whatsapp profile pictures being used by ISIS, made the rounds of mobile phones as around the country. There was also a rumor about the shortage of salt in November which led to an increase in prices in some cities including the national capital, and a rush by consumers to stock up on salt.

In December 2016, a false online article claimed that Israel’s former defense minister threatened to nuke Pakistan if it sent its troops to Syria. The Pakistani defense minister believing this tweeted, reminding Israel that Pakistan is a nuclear state too. This has caused widespread embarrassment to the country and has raised concerns about the risk that social media carries.

Indonesian President, Joko Widodo, recently announced in a cabinet meeting that there is an urgent need to control fake news causing sectarian and ethnic violence in the country. The violence was fed into by false stories that 10 million illegal Chinese workers had entered Indonesia to scoop up jobs, that the government was printing bank notes featuring the Communist hammer and sickle and that the governor of Jakarta drank beer during a meeting. The Indonesian government has decided to take measures to filter websites for fake news, evaluating social media accounts and promoting social media literacy.

Thus, fake news isn’t a joke anymore and needs tp be looked at, with all measures of course remaining within the democratic framework. Facebook has recognized the issue and plans on taking various steps to tackle it. Right now, it has ensured that a FB subscriber can eport the story or mark it as spam.

Google is also currently working to find a solution to keep its ads off fake news sites. Both the companies’ claims seem ambitious right now.

The freedom of the press has taken a new meaning. Censorship, which can be used as a tool to curb the trend of fake news, will harm the freedom of speech and expression and so the responsibility lies with the reader to be able to differentiate between truth and lies by fact checking and not just sharing the latest trend at the click of a button. And to expose those found falsifying the news for political ends.