DOHUK, IRAQI KURDISTAN: Seeham Haji Khudayda, a 22-year-old Yazidi woman from northern Sinjar, was sold seven times during her ISIS captivity. Like chattel, she was passed from one ISIS fighter to the next. She was raped almost daily. Sometimes she was gang raped by her owner’s guards. But of all the abuses she endured, what outraged her the most was the women who were complicit in it -- and who participated directly in her rape.

In addition to being raped, captured Yazidi women were forced to work as domestic servants for ISIS families. The wives and children of ISIS fighters would often participate in verbally and physically abusing Yazidis, according to accounts from survivors I spoke to in Dohuk. For Seeham and at least one other Yazidi survivor I spoke with who asked not to be named, the complicity went even further.

The second ISIS fighter who bought Seeham had a wife who helped him rape Seeham. The wife would restrain Seeham’s arms and legs, apply her makeup and dress her up in lingerie in preparation for her husband. She would prepare Seeham for rape and even seemed to derive enjoyment from the excruciating process, Seeham recalled, her doe brown eyes welling up with tears of anger.

On August 3, 2014, ISIS attacked Sinjar in northwest Iraq as part of a pre-planned and systematic campaign of genocide against the Yazidis. Yazidis are a Kurdish-speaking ancient community who practice a pre-Islamic monotheistic religion that ISIS ideologues equate with devil worship. All across Sinjar, wherever Yazidis were captured by ISIS, the Sunni extremists forcibly converted or killed the men and enslaved the women and children.

According to the directorate of Yazidi affairs in Dohuk, 6,417 Yazidis were kidnapped by ISIS. By the middle of August 3,092 had escaped or were rescued and another 3,325 remain in ISIS captivity (these figures have likely changed since the liberation of Tal Afar, where many Yazidis were sold in slave markets.) Thousands more Yazidi men and boys were killed. The number ranges from 5,000 to 7,000 depending on who you ask.

Seeham was just 19-years-old when ISIS invaded Hardan, the northern Sinjar town where she lived with her husband and infant daughter. ISIS murdered her husband along with the rest of the men in Hardan that day. The women and children, meanwhile, were hauled away in buses and driven to a holding area in Tal Afar. 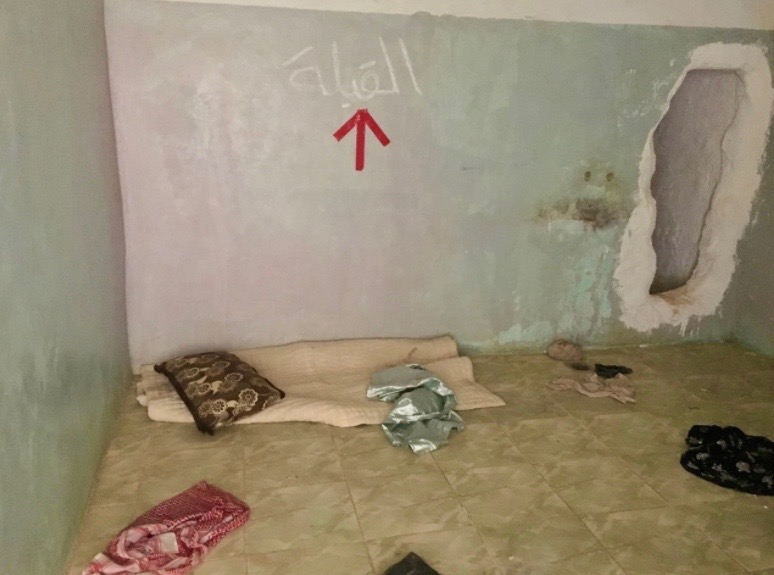 An ISIS prison cell for Yazidi women and girls in the collective town of Tal Ezeir (Arabic name is Qahtaniyah) located south of Sinjar. Yazidis were forced to pray in the direction of Mecca as demonstrated by the Qibla on the wall. (Photo Credit: Rania Khalek, August 12, 2017)

Seeham spent the next six months being shuffled between the Iraqi cities of Tal Afar and Mosul from one holding area to the next. She was imprisoned with hundreds and sometimes thousands of Yazidi women and children. Each day ISIS commanders would select girls to sell as sex slaves. Seeham watched them drag away girls as young as 9. They were usually pulled from their mothers or older siblings kicking and screaming over the riotous objections of their relatives, who were brutally beaten for protesting.

“They were choosing the prettiest and most beautiful girls for the ISIS leadership,” said Seeham. Desperate to make herself look as unattractive as possible, Seeham cut her eyelashes, smeared ash on her face and avoided bathing. “I wore the clothes of elderly women. We would cover our faces with scarves and make some crazy movements to try and look ugly. I put a white cloth on my head to look older, anything to avoid being taken by them.”

Yazidi women quickly realized that ISIS placed a higher value on unmarried girls, so many would say they were married even if they weren’t. They would even pretend their nephews, nieces or young siblings were their children. Seeham’s daughter was just 4 months old at the time. Even though she was feeding her child with baby formula, Seeham would pretend to breastfeed her in front of ISIS members to remind them that she was a married woman.

Seeham’s attempts to repel ISIS worked for about six months. Then one day she was selected.

The first ISIS fighter who bought Seeham was a man called Abu Anas. She pleaded with him not to rape her and asked why he was treating her this way.

“He told me you are a Yazidi, either we will kill you or you will convert to Islam. I said, please kill me, don’t rape me, I love my husband. He said it’s not your decision. This is halal. In the Koran, it’s mentioned that you can take the women of other religions as sex slaves. This is our right, we are not doing anything wrong, it’s according to Islamic law.”

“You are kuffar [an unbeliever], you deserve this,” she remembered him saying.

Abu Anas was Iraqi. He had two guards, one Lebanese and the other, a Syrian. The three of them gang raped Seeham on several occasions, usually as punishment for resisting Abu Anas. They would rape her with her baby girl in the room. It killed her to hear her daughter’s cries during the abuse.

Seeham believed she was living a nightmare that couldn’t get any worse. But it always did.

The ISIS fighter who bought Seeham from Abu Anas was called Abu Qutada. He was Lebanese and had a Syrian wife from Raqqa. “He was so bad,” said Seeham, “but his wife treated me even worse than him.”

“She forced me to shave my body. She brought me sexy clothes to wear for her husband and helped him rape me by tying me to the bed. She used very tough, cheap and bad words with me,” recalled Seeham.

On top of helping Abu Qutada rape Seeham, his wife forced her to clean their four-story house from top to bottom every day. Abu Qutada’s wife would invite her female friends to join her in taunting Seeham as she cleaned. “She forced me to clean the entrance to the neighbors flat and she forced me to clean her and her neighbors’ shoes. They would make fun of me while I cleaned, saying look at my slave, she’s a bitch, she’s a Yazidi,” said Seeham.

Abu Qutada returned Seeham to Abu Anas after she threatened to throw herself off the balcony. She was sold to five more men after that.

Most of the Yazidi survivors I spoke to described similar abuses from ISIS wives. In some cases, they say the children of ISIS fighters also abused them.

What I found in my interviews seemed to reinforce areport published last year by the Independent International UN Commission of Inquiry on the Syrian Arab Republic that found the wives and children of ISIS fighters often abused captive Yazidi women and children both verbally and physically.

“ISIS fighters, and sometimes the wives of ISIS fighters, regularly force Yazidi women and girls to work in their houses. Many of those interviewed recounted being forced to be the domestic servant of the fighter and his family. Sometimes, they were also made to look after his children. When held closer to the frontlines, Yazidi women and girls are forced to cook for their respective fighter-owners and other ISIS fighters housed with or near him.

One Yazidi girl, 13 years old, was held for 11 months in ISIS-controlled territory and sold multiple times. Sexually enslaved, she recounted also being forced to cook, clean and wash the clothes of her Syrian fighter-owner and his family at a house in Raqqah city,” said the report.

“In some cases, the wives and children of the ISIS fighter would also beat Yazidi children,” adds the report.

Iraqi authorities are currently holding some 1,400 foreign ISIS wives and children in a refugee camp outside Mosul. Though many are said to have been deceived into coming to ISIS territory, at least some likely participated in atrocities against Yazidis. It remains to be seen if and how the adult women, particularly theforeigners, who participated in such actions will be held accountable or how the indoctrination of children, including Yazidi children in ISIS territories, will be dealt with.

ISIS went to extreme lengths to erase Yazidi identity and supplant it with another one when possible. Yazidi boys over the age of seven were taken to ISIS indoctrination camps and forced to become fighters for the group. There hasn’t been much research into the psychological consequences of ISIS brainwashing on these children, but what seems clear is those who have been rescued are extremely difficult to care for.

In one case, a Yazidi mother in an internally displaced persons (IDP) camp in Dohuk complained that her 10-year-old son tried to behead his baby sister. When asked why, the boy responded that she is a Yazidi kuffar and deserves to die. This instance was relayed to me by Finnish researchers studying the impact of ISIS indoctrination upon children and the systematic destruction of the Yazidi community.

A Lebanese woman who was married to two ISIS fighters, first to a Lebanese man and then to a Tunisian,told Akhbar’s Jenan Moussa that ISIS wives would often fight with their husbands “because they feel jealous” of the Yazidi sex slaves. “There was a lot of tension between the wives and the sex slaves,” she told Moussa. “Some ISIS fighters would treat their female slaves better than their own wives,” she said, complaining that the ISIS fighters “were spending too much on the sex slaves, buying them the best make-up, clothes and accessories.”

The woman showed no remorse or sympathy for the treatment of Yazidis as she explained how her husband and his friends wouldbuy and sell them on Telegram, an encrypted messaging app. She was cold except for when she giggled while discussing the topic.

An ISIS wife from Tunisia provided a similar testimony about the jealousy over Yazidi slaves, explaining to RT, “Many men loved Yazidi girls more than their wives. Just imagine for example a man gets himself a Yazidi girl and as time passes he begins to love her more than his own wife and treats her better and if this Yazidi converts to Islam he will be able to marry her. Marry! Do you get this? It means she will become free, go wherever she wants. She won’t be a slave anymore in this case. Is this clear?”

That isn’t entirely true. Yazidi women were compelled to convert, but that did not free them from sexual slavery. However, it did give them a little bit of wiggle room to run away. That’s how Seeham escaped. She tricked the last ISIS fighter who bought her, a man named Hassan in Mosul, into believing that she genuinely embraced Islam and loved him and wanted to be his wife.

She slowly gained his trust and eventually he allowed her to contact her family in Dohuk over the phone just to tell them she was still alive. She secretly stayed in touch with them and they arranged for a man to smuggle Seeham out of Mosul, the formerly ISIS-controlled city where she was being held as Hassan’s captive wife. Due to Seeham’s cleverness and sheer luck, the ruse worked. Had she been caught, Hassan would have probably killed her daughter. Indeed, ISIS members often punished Yazidi runaways by gang raping them and sometimes killing their children.

Today Seeham is safe with her family in a displaced persons camp in Dohuk, but the psychological scars of her enslavement still haunt her. Her sleep is pierced each night by terrifying visions of the men and women who tormented her. By day, she wonders if any of them will ever face justice.

(Rania Khalek is an independent journalist living in the Washington D.C. area. This article has been made possible by the readers and supporters of AlterNet.)