AHMEDABAD: Its been quite a journey and one that only those with commitment for a democratic India can take. The yatra started by Dalit leader Jignesh Mevani on the first anniversary of the Una violence in which cow mobs had stripped and beat Dalit youths on July 12 nt from Prime Minister Narendra Modi, as the horror and the pressure spiked.

Mevani joined by Kanhaiya Kumar and other leaders from across India has been battling the might of the government at every step of the way. The Ahmedabad Convention was packed to capacity to begin with, as the speakers focused on the lynchings across communities, of the attack on livelihood, of the discrimination against all marginalised and directly questioned PM Modi and his government’s anti-people policies. But this was about the only event that went as per plan, as the government stepped in to revoke permission for the Freedom March and since then every movement has been guarded by contingents of police, with the Vishwa Hindu Parishad men stalking the marchers.

The marchers have been very active on the social media, posting photographs and details about Azadi Kooch, given the fact that the media has taken a decision to ignore this major event. After permission was denied, the individuals and organisations representing workers, trade unions, students, Dalits, Muslims, Budhists, Patidars and others decided to go ahead with the plan. The cops were present at Mahesana in full strength with lathis, guns, water tanks, the works. The marchers sang songs, made fiery speeches of course with a huge meeting being held at the Chowk. They were arrested for several hours and after being released continued on buses, to the next destinations, regardless of warnings from the cops. It was decided not to march on foot but to travel in buses, and thus technically conform to the cops red letter warnings as the buses could not be constituted as a march!

Frustrated VHP men who have been following Azadi Kooch at one point tried to drag and abduct an AISA leader who had separated along with a smaller group from the rest of the participants. The presence of mind of a couple of men at the spot, who brought in what many said was a reluctant police force immediately helped and the outnumbered students and others were able to “save” their comrade, but not without real moments concern. A day or so later Mevani was also attacked, as a motorcycle rider tried to drive over him. The result has been a herding together, and a decision to stay in larger groups to foil VHP attacks. 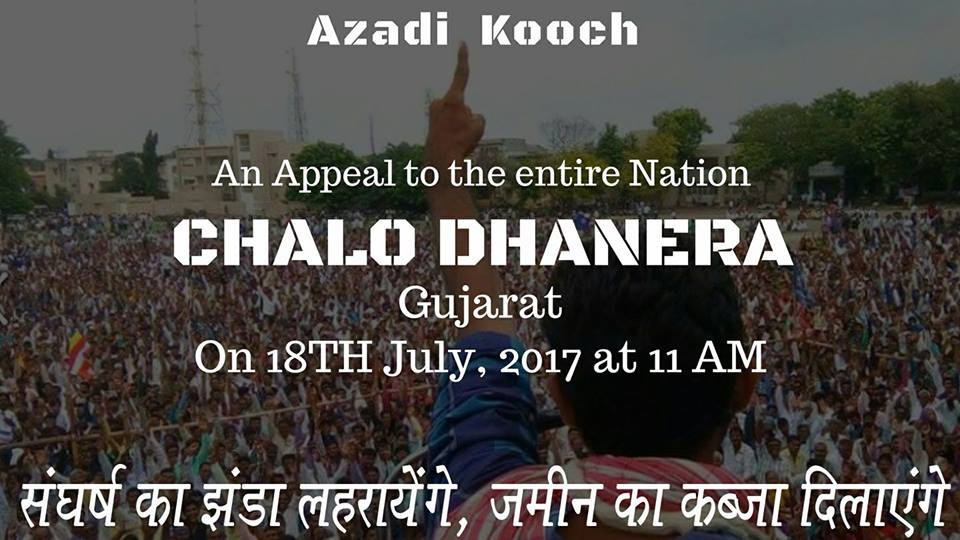 Azadi Kooch has been acquiring a distinct economic flavour as it moves through the villages and districts of Gujarat. The speakers are bold, hitting directly at PM Modi and his government, singing songs, reciting poetry and staging plays as they move on. Everywhere the reception has been good, with meetings going till late into the night. The anger expressed against the lynching is presented in a framework of rights, and livelihood. As one of the marchers wrote, “Azadi Kooch is for self respect of the people, land should be distributed as per the documents given to the farmers, scavenger workers should be given to the 5 acres of land, scavenger workers will not clean sewages neither will they bury the sacred and the holy cow (who it was suggested should be bured by the upper castes who care so much)....The scavenger workers have been doing this work for centuries, many rulers have ruled the country but their work have not change. When ever they have for their rights they have been killed, beaten up, flogged and social boycotts.” 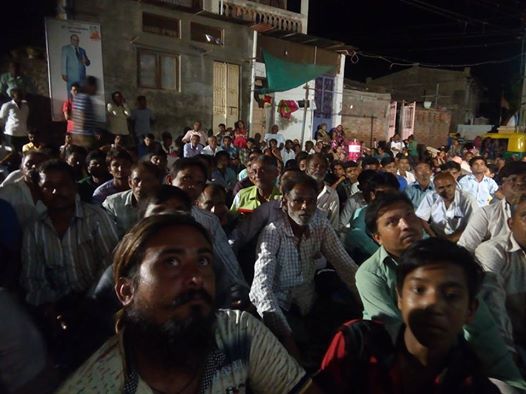 The Azadi Kooch demands that will be raised on July 18 at the public meeting in Dhanera will raise the following issues again:

“Fight for self respect.
Abolish caste system and class work.
5 acres land for all scavenger-safai workers.
Land to the tillers.
Land should be immediately distributed as per the documents given to the farmers.
No more scavenging work.
Stop Atrocities on Dalits and Muslims.
Stop Lynchings of Muslims and Dalits.
Fight for land rights.
Down with the Fascist Sangh Parivar forces and all anti-people, Anti-Dalits, anti-muslim, anti-women forces.”

The slogans are many but Jai Bheem and Inquilab Zindabad dominate. Political activists have joined Azadi Koonch but not a single political leader of any party was invited. It is a people’s movement with a decided Dalit-Muslim unity theme, being driven into the villages of Gujarat as the marchers beat the drums, sing songs, and insist on equality and rights.