RCB Bowling Not As Toothless As Made Out to Be

Virat Kohli had commented on Royal Challengers Bangalore's squad after the auctions. A few games into the season, the Indian skipper was bashed for thinking he had a good mix of bowlers. They had leaked runs at a rate greater than the flow of water from the broken tap in your panchayat and their season seemed all but over at the halfway stage.

“We are not relying on one skill or the other. I think it is a great balance of spinners, fast bowlers, couple of all-rounders, spinning all-rounders, fast bowling all-rounders. Obviously, the batting has been a strong point for RCB over the years. But, I think the bowling department and strengthening of it has been a massive boost for us from this auction. Pretty optimistic about our chances heading into the IPL,” Kohli stressed much to the annoyance of Royal Challengers Bangalore's vehement fans.

Now, it is understandable to feel miffed after your team racked up 200+ on the board and still lost. But it was MS Dhoni against a handful of dibbly dobbly seamers bowling innocuous stuff in the death. How better could they have fared?

Dig deeper and you would probably spare the bowlers some stick for they haven't been as agonizing as they have been made out to be. It was the management's and Kohli’s fault that they didn't have the right mix of bowlers (read bearing in mind the abysmal decision to keep Tim Southee out) or chose to finish off their best bowlers in the earlier part of the innings.

After RCB bowled out Kings XI Punjab, one of the strongest batting line-ups in the tournament, for a..wait for it.. measly 88, the impression about RCB’s bowling is slowly changing. 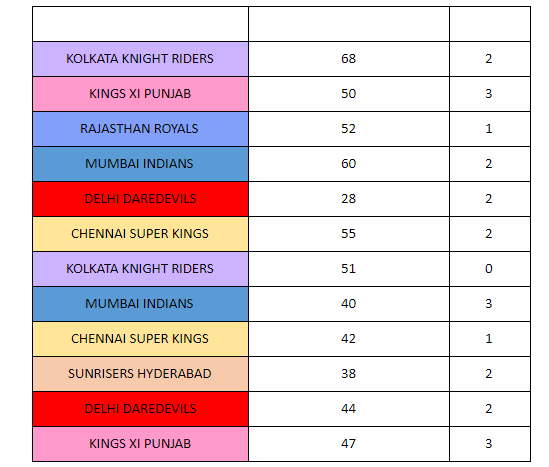 Pivotal for the Challengers have been Umesh Yadav, who has picked up 13 wickets in the first six overs, conceding at an economy less than 6.75. Yuzvendra Chahal has been equally influential, going for 5.66 an over although he hasn't taken up as many wickets. Even Tim Southee and Moeen Ali (in one game) have shown they are capable of starting off well.

So where exactly does Challengers lose it?

Their problems have stemmed in the death overs, where they have almost always leaked at an atrocious rate. This is probably because they haven't had the right personnel in the final few overs.

When Dhoni went berserk against them, the bowlers in charge in the final six overs were Mohammad Siraj and Corey Anderson (both of them bowling three each). 81 came in these last six overs with the two bowlers appearing completely clueless against Dhoni in full bloom.

Now with Tim Southee in the XI, RCB are more assured at the death. Mohammad Siraj too has improved by leaps and bounds as the tournament progressed and in Chahal they have a leggie capable of taking wickets with his wide of off-stump deliveries to dismiss big hitters.

What RCB actually do need is to distribute their bowling personnel well. Tim Southee hasn't been phenomenal in the powerplays while Umesh hasn't been that great at the death. But on seaming wickets, the two could start in tandem. Siraj has been dreadful in the powerplays going for 8.8 an over and picking up just two wickets while Washington Sundar has gone at a whopping economy of 11 in the powerplay overs.

Their best ploy would be to hold back Siraj for the middle and death overs and preserve atleast two overs of Southee for the death. Ali, Umesh and Chahal can be decent options in the powerplays with Southee bowling an over or two based on conditions.

Since the game against Kolkata Knight Riders on April 29, RCB haven't conceded more than 50 in the first six overs. They have also picked up 11 wickets in five matches since then, winning three and losing two matches (one by a pretty close margin to Sunrisers Hyderabad). This clearly shows that RCB have been doing something right in recent times. Their play-off hopes might still be iffy but RCB sure have started to strike a balance that have eluded them in previous seasons.