Carving Out Your Identity the Kane Williamson Way

One of the best T20 players in the world?

Kane Williamson is not like your regular T20 players. He cannot play those short arm jabs like Virat Kohli that leave us at a loss of words more often than not. Neither can he bash any bowler at will just like AB de Villiers nor does he have the brute power of David Warner that can send chills down the spine of even the best bowlers in the world. In fact, Williamson hardly has any attribute that represents the fiery brand of T20 cricket.

However, he can do a lot more in a different way.

He can treat you with those classic copybook cover and straight drives down the ground better than anyone else. He can play those wristy flicks bisecting the gaps through the leg side to perfection, something that will delight you more than a six hit with brute power. Williamson can be late on his cuts and yet ends up timing them to perfection, thus sending the ball rolling over the ropes for a boundary. He does all of this with a no fuss attitude, cool and calm demeanor and without even a hint of aggression on his face or in his body language. And believe it or not, it is this classical approach to his playing style that sets him apart from other T20 players.

Williamson represents order in times of chaos. Stability in times of uncertainty. In fact, Kane Williamson is one of those classical musicians residing in people’s hearts, in this modern day world of rap and fusion.

‘Kane Williamson is one of the best T20 players in the world’. This statement would have raised many eyebrows a couple of months back. Leave aside being one of the best players, he was not even considered a fit to the T20 scheme of things by a major faction of the cricketing fraternity.

Two months down the line, he has shut up all his critics. 735 runs in 17 matches of IPL 2018 scored at a staggering average of 52.50 and a scintillating strike rate of 142.44, that even includes eight scores of fifty plus, is testimony to the fact that his batting prowess is not only limited to the longer formats of the game but is more than fit to rule the shortest format as well. The fact that he has turned out to be the highest scorer in this season leaving the likes of Kohli, de Villliers, Rohit Sharma and Shikhar Dhawan far behind, also tells us about his class as a player. 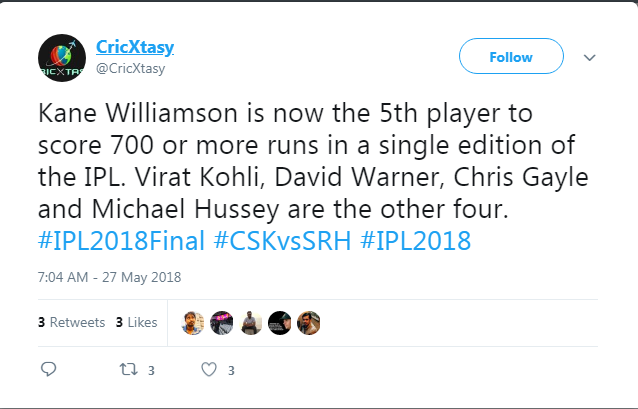 He was more of a contingency or damage control plan for the Sunrisers Hyderabad, someone who could fill the void of Warner’s leadership in the aftermath of his ban resulting from ball tampering incident. But to expect him to stand up in the way that Warner did for the franchise all these years as a batsman was always going to be too much to ask for.

However, look at him now. He has not only filled up the big boots of Warner, but he has also carved out his own identity, both as a leader and as a batsman. He has created an identity distinctively different from that of Warner, something that defined Hyderabad’s entire campaign this season.

He has been associated with the Sunrisers for four straight years since 2015. Yet he was never a part of the regular scheme of things for them. The fact that he played 2,6 and 7 matches respectively during the 2015, 2016 and 2017 seasons respectively reiterate how everyone under-rated him as a T20 player. He scored his first IPL fifty in the 2016 edition when he amassed 124 runs in 6 games at an average of 20.66 and a measly strike rate of 101.63, something that the opposition will take with both hands every game.

Even his career T20 and T20I overall strike-rates of 122.05 and 120.95 tell us the fact that he had never been a fast scorer in this format. But the change was visible the way he played in the 2017 edition. 256 runs in 7 matches, at an average of 42.66 and a scintillating strike rate of 151.47, that included 2 fifties and a best score of 89 runs indicated the change he has brought about in his playing style. But that was ignored by the franchise as he was still made to sit out when the first choice players were available.

However, Warner’s ban in IPL 2018 became Williamson’s gain. He showed that the signs of improvement as a T20 player he showed during last year was not a fluke at all. And here he is after 17 games, standing tall as the highest run-scorer in the season.

The change has been seen more in his approach than his technique. He has become a lot more pro-active at the crease as he has reduced his dot ball percentage considerably. Moreover, he doesn’t shy away from going for the big hits now. Previously his game was centred more around playing grounded shots and bisecting the gaps. This year he has relied on his timing and a total tally of 28 sixes this season tells us how he has improved his shot making ability considerably. He is still that touch player but he is using those skills more smartly now to fetch boundaries at will.

Despite losing the finals, Williamson deserves a lot of credit for the way he led this team throughout the entire tournament. He carried the weight of the entire batting unit on his shoulders for the major part of the tournament, marshaled his troops in such a way that he extracted the best out of them on most occasions and more importantly, he achieved all this while Sunrisers was undergoing a huge change with a new set of players and the unavailability of Warner. So the Kane Williamson way—both in terms of batting and leading the side—might be totally different to that of others, but he has surely carved out his own identity and legacy amidst crisis.