The Intercontinental Cup had its positives

Exactly an year ago, Indian media houses were greeted with a positive press release from the country's football federation. The mail conveyed that the Indian Under-17 team had beaten its Italian counterpart during the team’s exposure trip in Europe and scripted a "new chapter in Indian football". The news, which was published by all major organisations and accentuated by celebrity 'influencers', sent the world of internet into a frenzy.

With the Under-17 World Cup, India's first FIFA tournament, only a few months away, this was the perfect news for the multitude of fans across the country. Suddenly the country started believing its team could compete with the very best in the world. Chest-thumping and mindless debates devoured the internet as the optimism levels hit the stratosphere.

Strangely though, as some nosy journalists later found out, the Italian football team website had no information about the match. A quick search confirmed that Italian starting line-up didn't feature any known U-17 player from their past matches either. So who did the Indian football team defeat? The Indian Football Federation said they "didn't know about it" and had assumed it was the national side because they wore the Italian jerseys. A Public Relations nightmare, as an AIFF staff would later admit (anonymously), putting unwanted pressure on an young Indian side while also giving a false sense of optimism to the fans.

For the Intercontinental Cup, that concluded on June 10th, the journalists were better equipped. They pointed out that the teams visiting India, including the lower ranked Chinese Taipei, were far from their strongest eleven. Yet, as is the strange pattern with news these days, these conversations got submerged in a wave of positive news about the Indian team. It started with Captain Sunil Chhetri's plea — a video in which he calls for more support at the stadium after being disappointed with the audience turn out in India's match against Chinese Taipei. The video went viral with the likes of cricket captain Virat Kohli requesting fans to cloud the stadium in support of the Blue Tigers. The fans did arrive in hoards and India did win the tournament beating Kenya in the finals but Chhetri's video had a far wider, and more importantly different, impact than he would have hoped for. 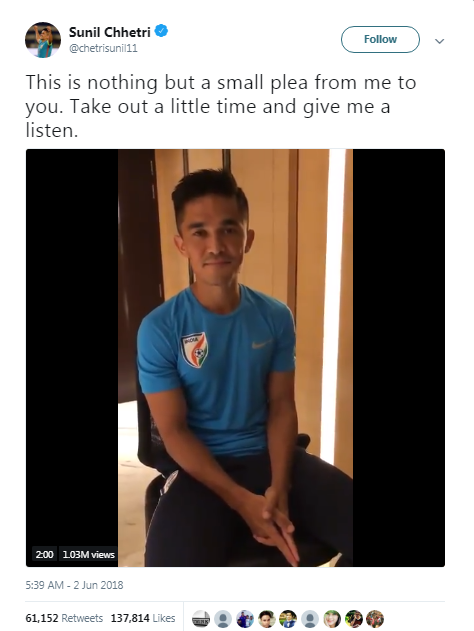 There was a shift in the narrative as media organisations felt the need to portray the Indian football team greater than what it actually is. Media outlets, responsible for sending out unbiased news, became fanboys of the Indian football movement. Suddenly there were statistics equating Chhetri to Lionel Messi, and Indian team's win record being compared to that of Germany's.

To be fair Chhetri, who has been a fantastic servant for the Indian football team, tried to quell most of these praises by pointing out there is still a lot of work to be done for India and the need to play top Asian sides more often, but that never made it to the headlines.

So what is the harm if sensationalism prevailed over sense in our coverage of the event? Especially when it was for a good cause – in this case garnering support for the Indian football team.

By portraying we are a better side than what the rank 97 would signify we risk a massive fallout when the going gets tough for the side. Instilling a false sense of hope does not do justice to a sport that is still in its nascent stages in the country. It happened with the Under-17 team – the interest in the team disappeared soon after the team failed to impress in the group stages of the World Cup. And it could well happen at the AFC Asian Cup where India will face strong opposition. It is imperative that the right details of our team is highlighted so that the ever-growing Indian football fans won’t be disappointed if the team struggles.

This is not to say we should be pessimistic. The Intercontinental Cup had its positives – the team showed great cohesion, dominated in the central midfield (an area of weakness), and was miserly defence. The success also put pressure on the authorities to send the U-23 team to the Asian Games, where the side will get to play against top sides. Not to forget AIFF’s strategy to improve India’s ranking by inviting Kenya and New Zealand, who were unlikely to send their main eleven.

It is unfair to criticise the team as well. They played their socks off and we have to acknowledge they are a developing side. It will take years of effort to have a system in place and this is exactly what the media should be focusing on. There is no quick fix to quality football. It took a decade of effort for Germany to rebuild a team to win the world cup. The current golden generation of Belgium football is also the fruit of a long-term plan. And these are nations who already had a footballing culture. In India the effort would be larger and these international matches are small steps in the right directions. Indian Super League is slowly starting to find its identity, with teams starting to prefer clever homegrown signings over international marquee targets.

In an era where loud, brazen news is in demand, it is important that the reports and opinions on Indian football stick to a narrative that is honest to what is happening to the sport.