France Beat Croatia But Both Emerge Victors on the Social Media

On Sunday night , the Les Bleus took the FIFA World Cup 2018 home and became the champions for the second time in their history after twenty years. France beat Croatia with a score of 4-2 in the widely watched and speculated World Cup final at Moscow’s Luzhniki Stadium. Croatian striker Mario Mandzukic scored an own goal against France in the initial 18th minute making him the first ever player to score an own goal in a World Cup final. French Striker Antoine Griezmann scored the next goal after a controversial penalty was awarded by Match Referee Nestor Pitina,with the help of VAR. 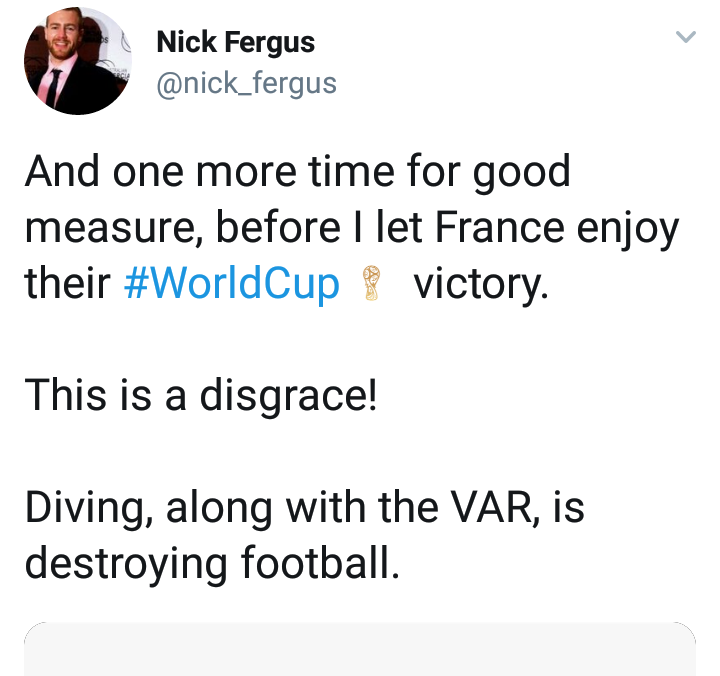 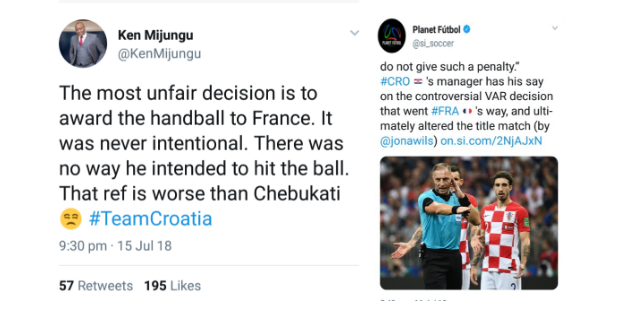 Paul Pogba and Kylian Mbappe’s goal each in the 2nd half against Croatia firmly placed them as the champion of this year’s FIFA World Cup. The Croatia National team led by Luka Modric created history by reaching their first ever World Cup Final.

A series of memes have been made about President Vladmir Putin .He was the only one spotted with an umbrella over his head when the rain started pouring heavily during the Award Ceremony . 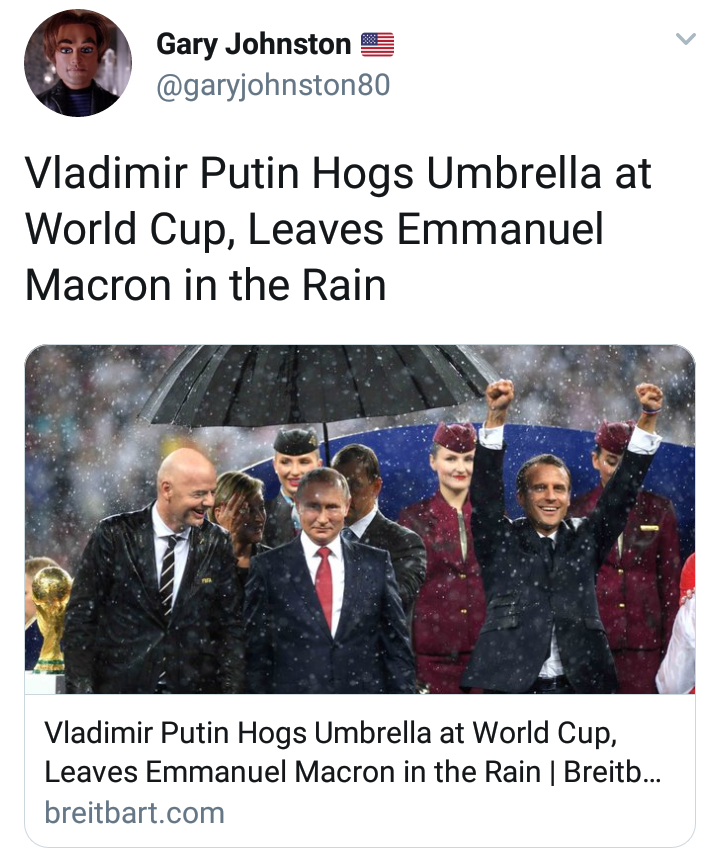 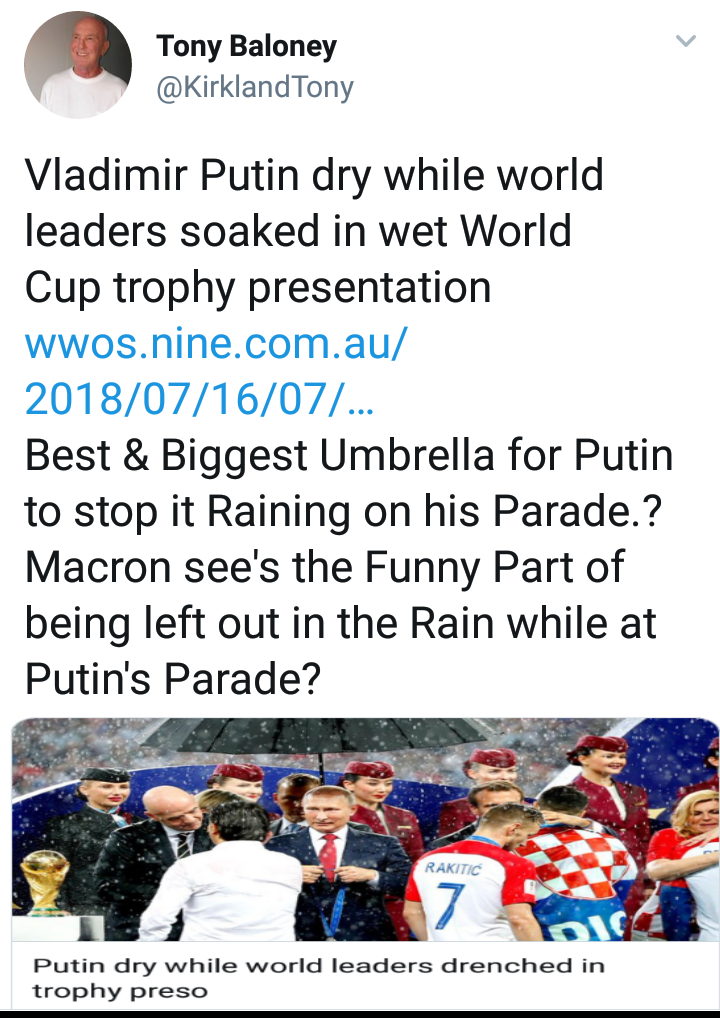 France’s historic win and landmark victory is widely celebrated by fans and supporters all over the world flooding the social media with posts and tweets as follows: 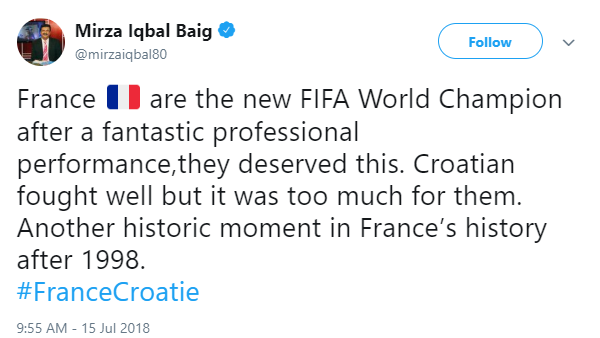 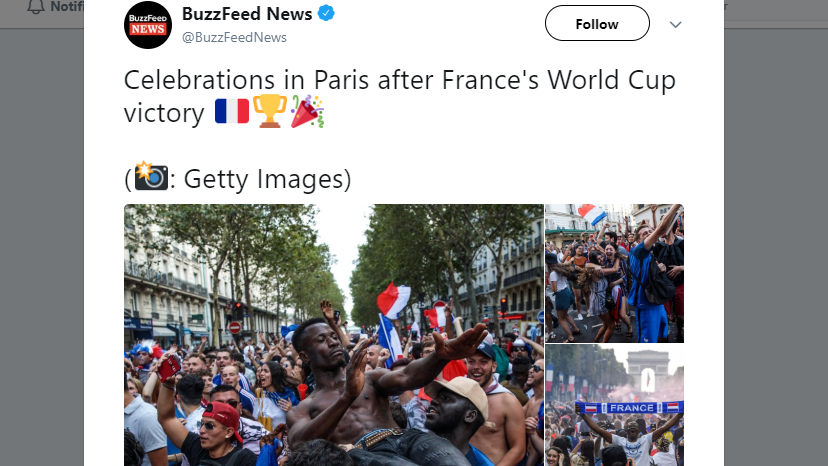 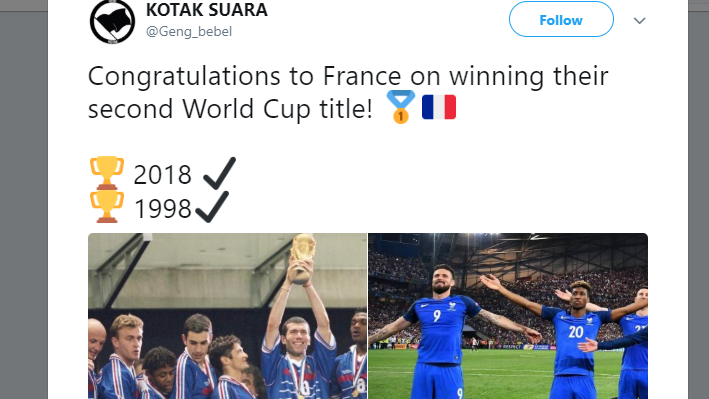 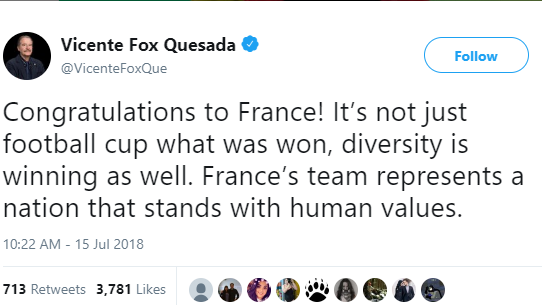 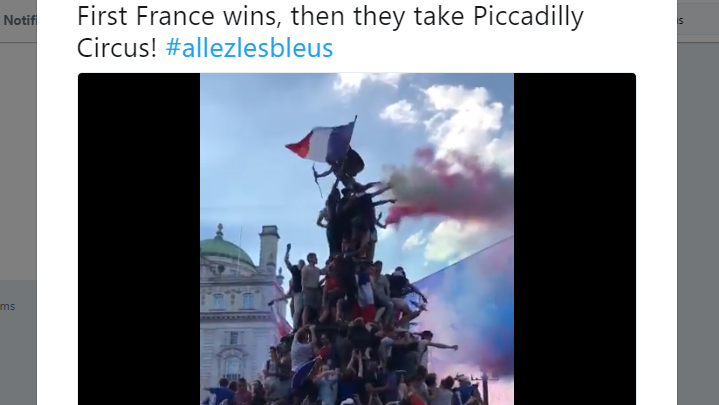 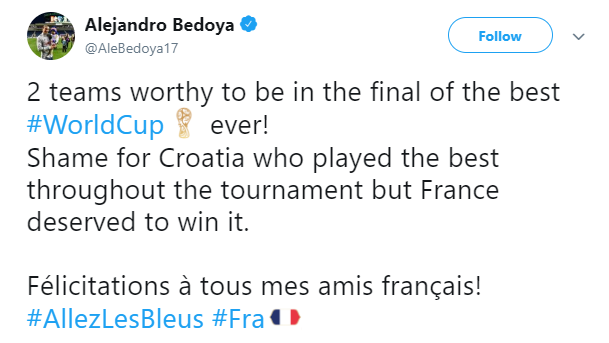 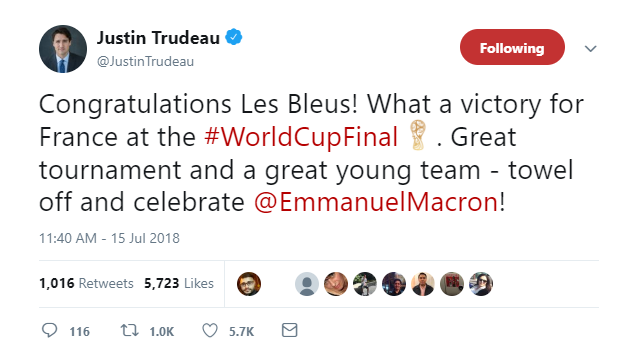 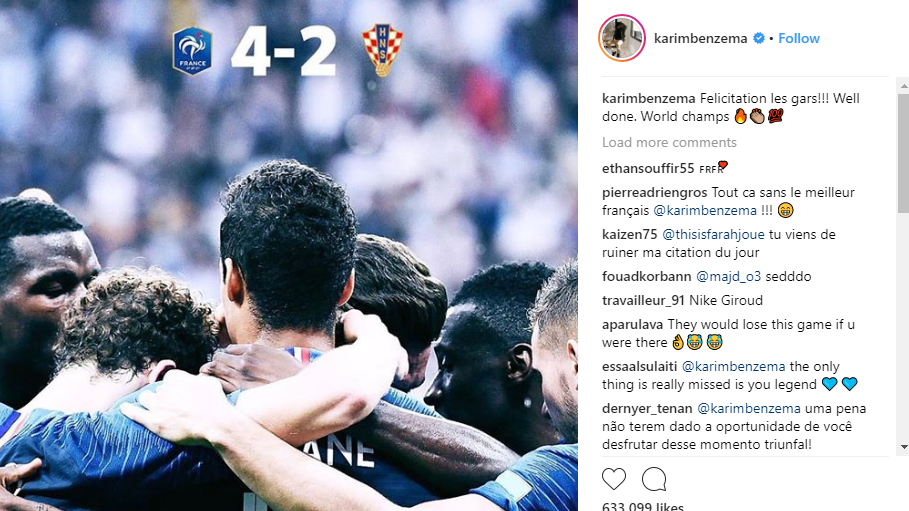 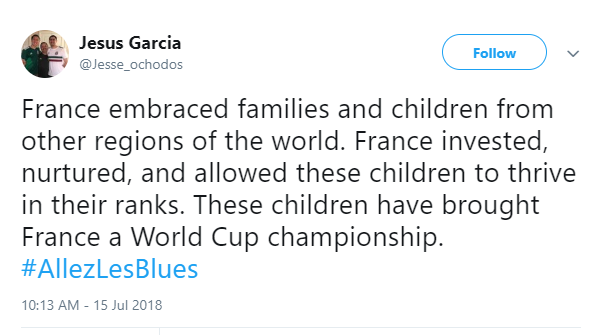 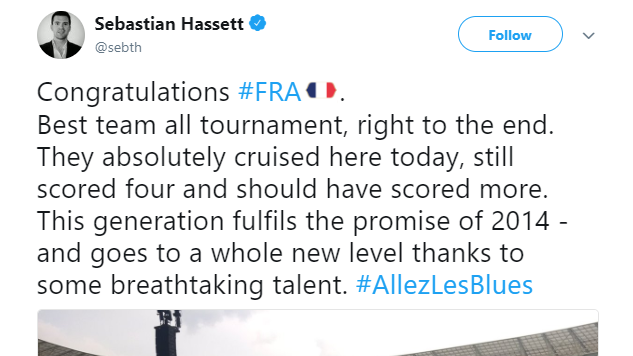 Croatia playing in their first ever World Cup Final which seemed as a fairy tale for them,were supported and cheered by millions all over the world claiming that the team and mostly their remarkable captain won the hearts of many. Some of the posts in support of the Croatians spirited game are as follows: 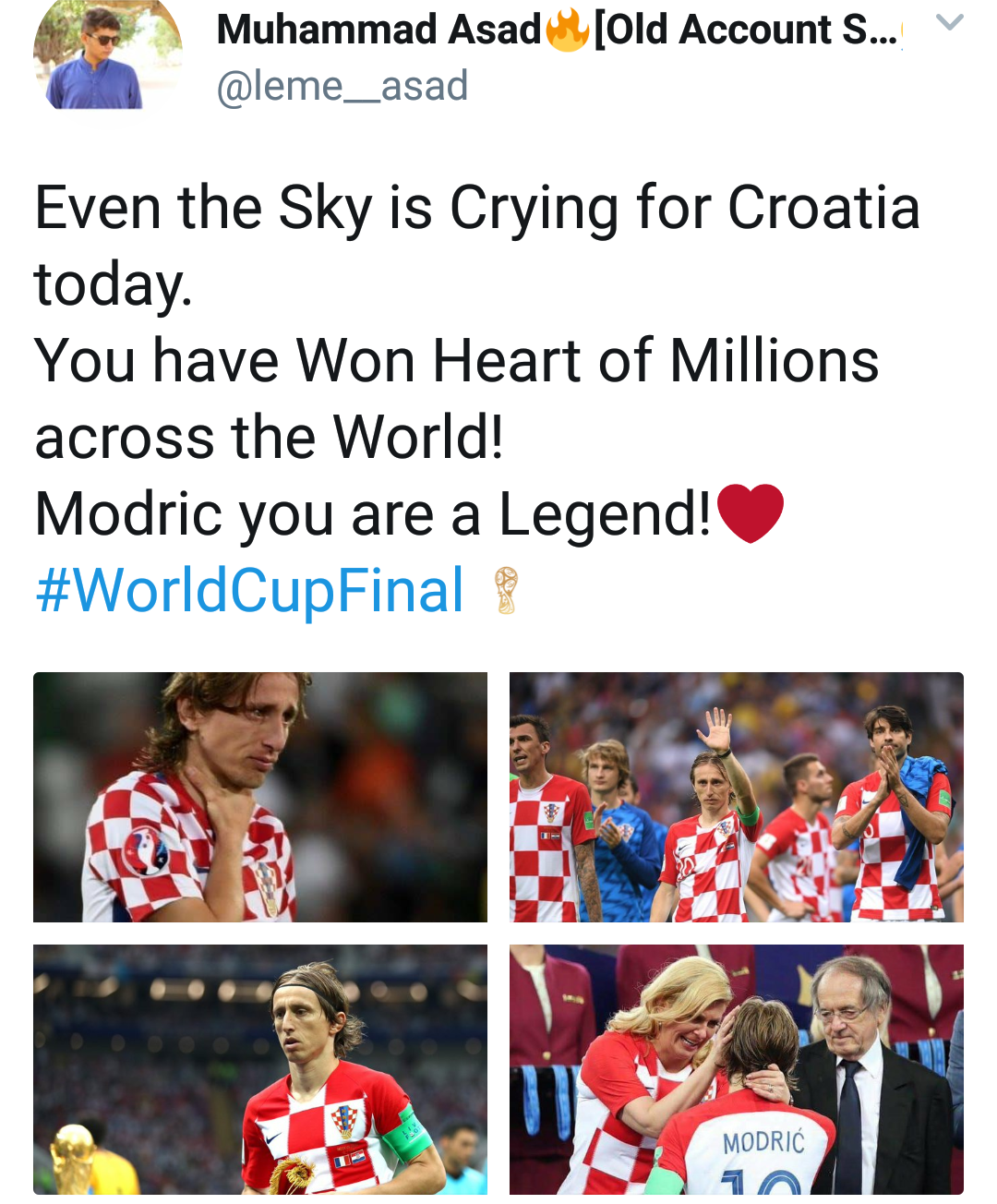 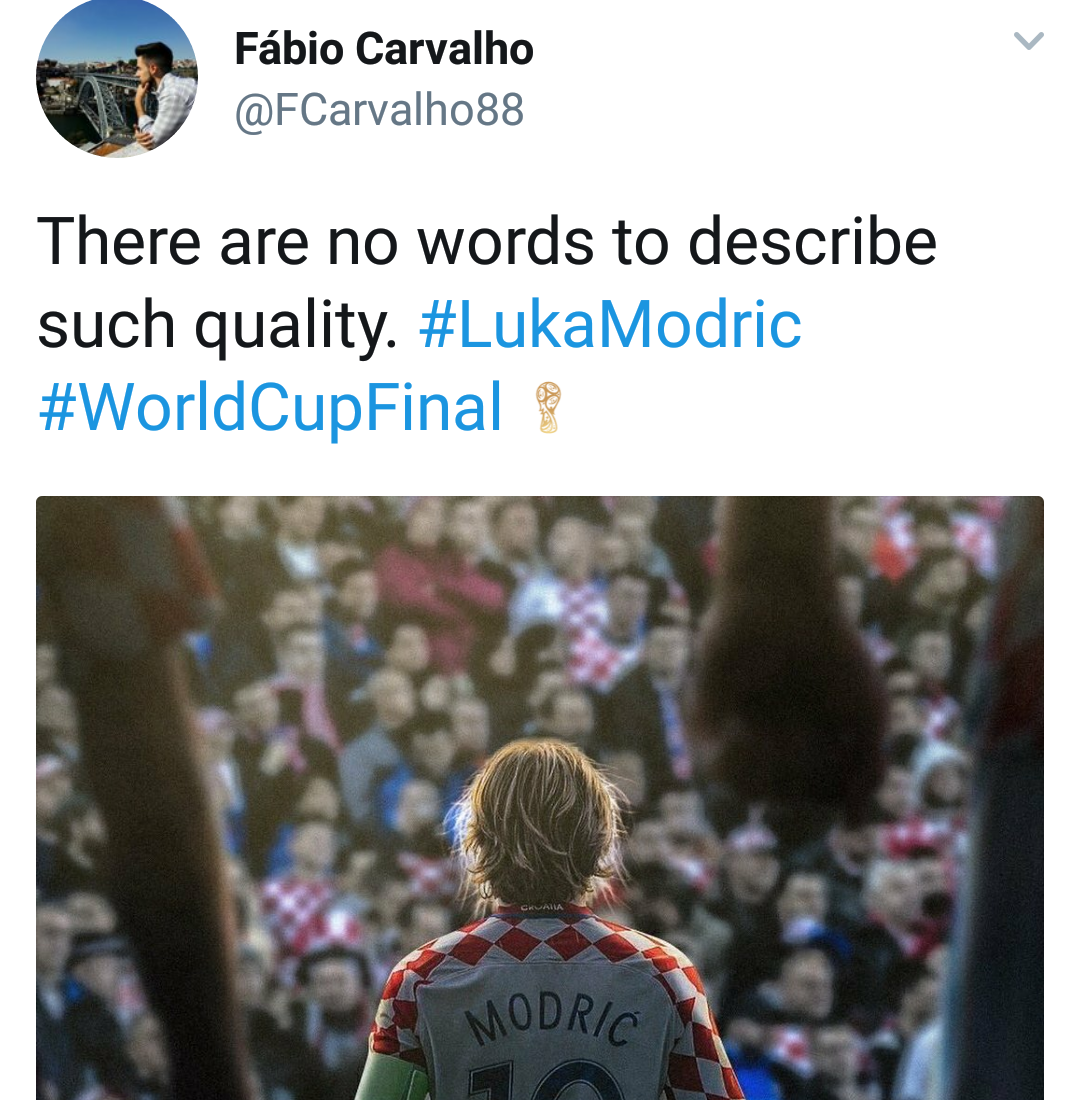 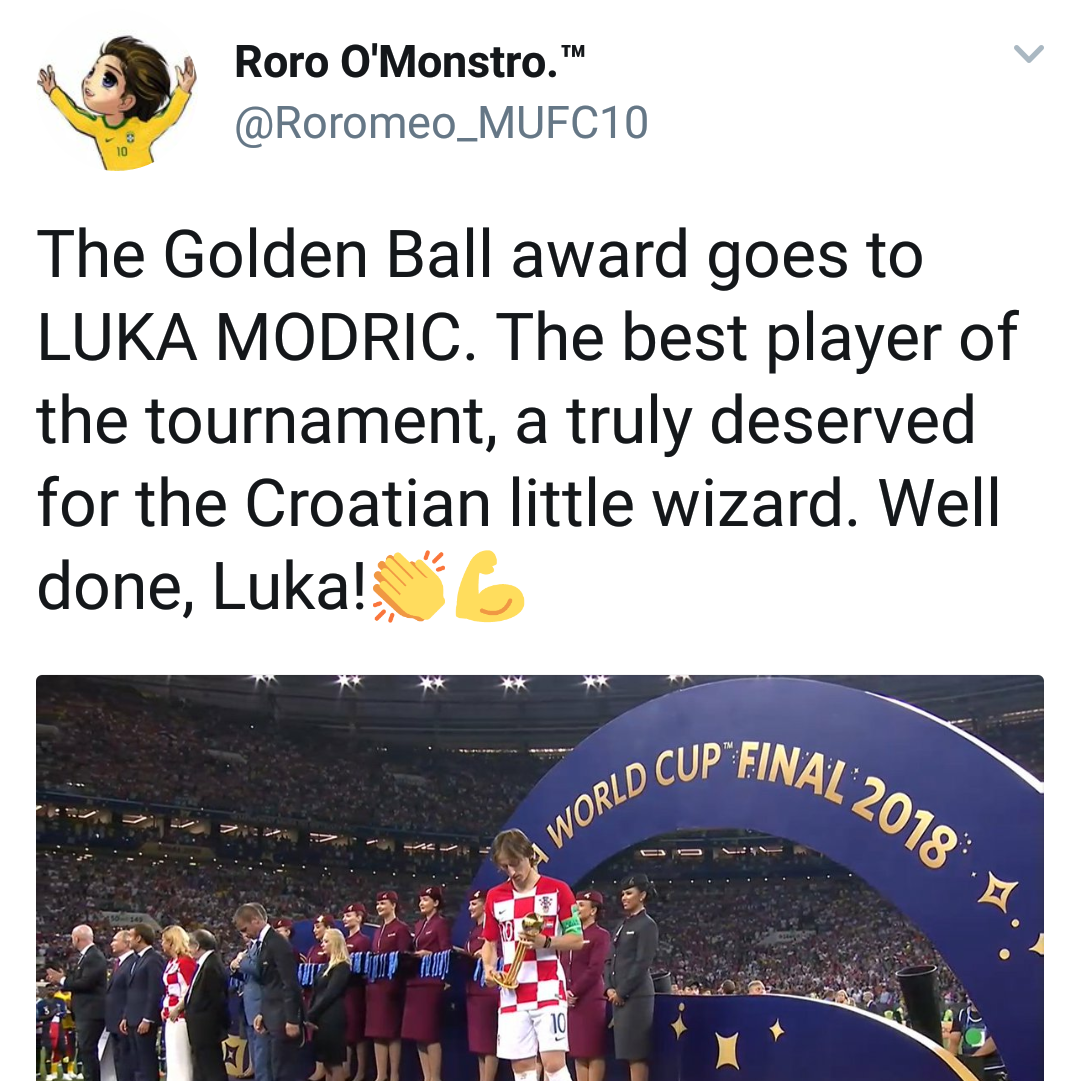 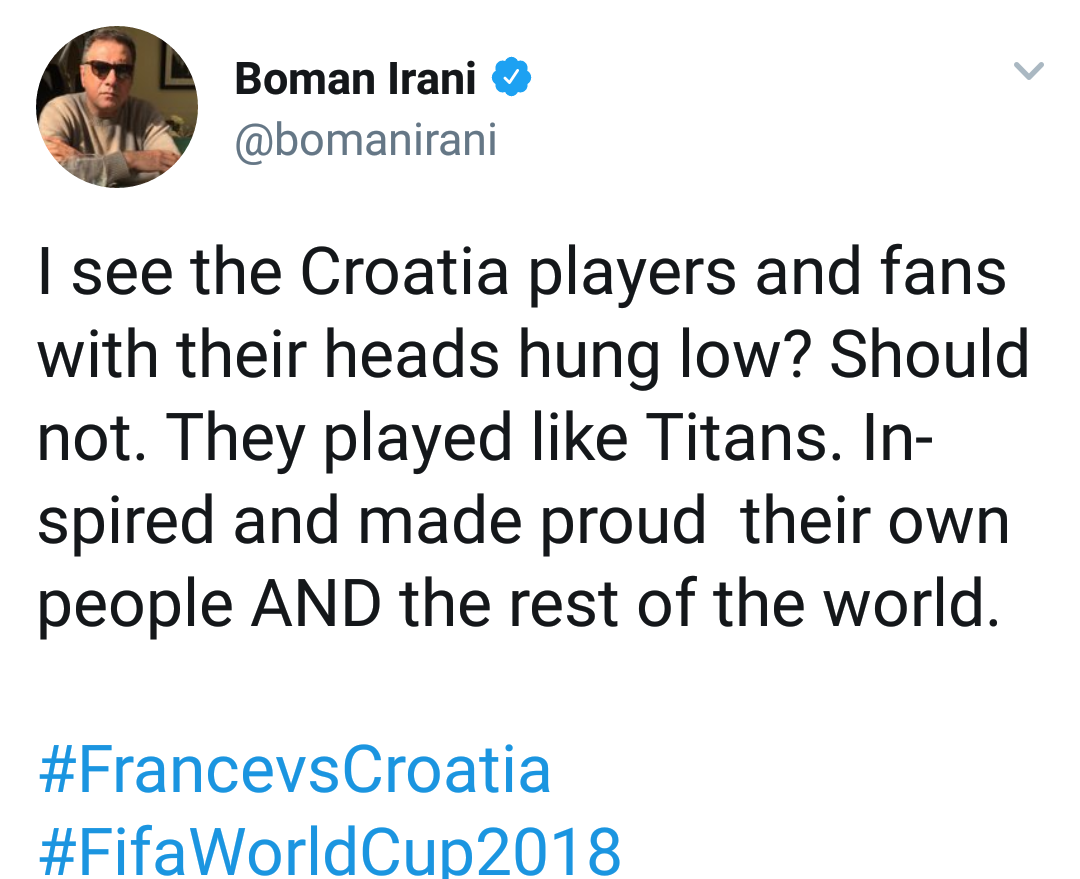 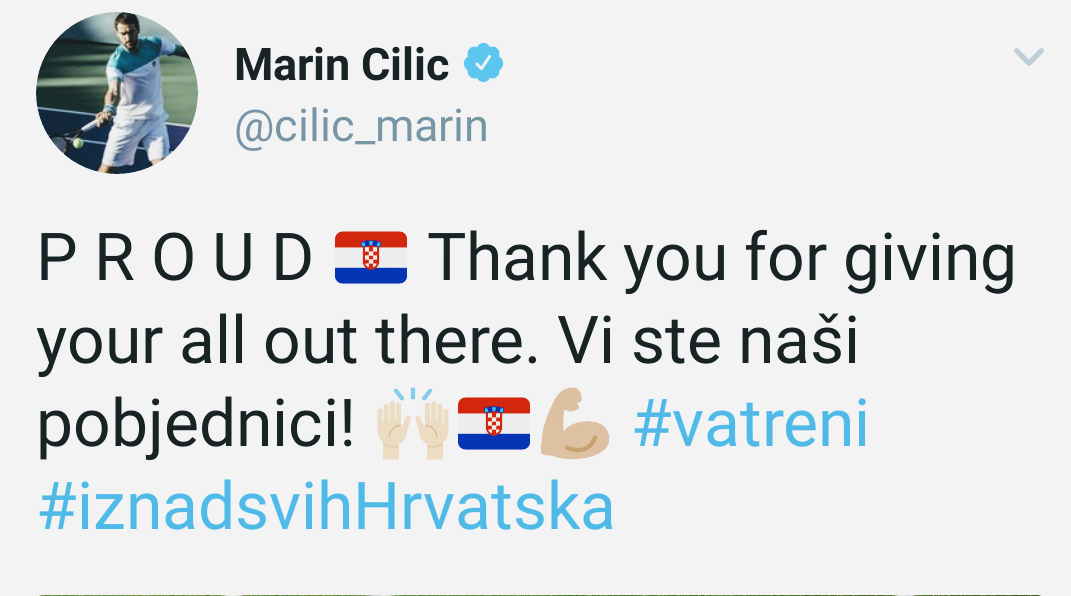 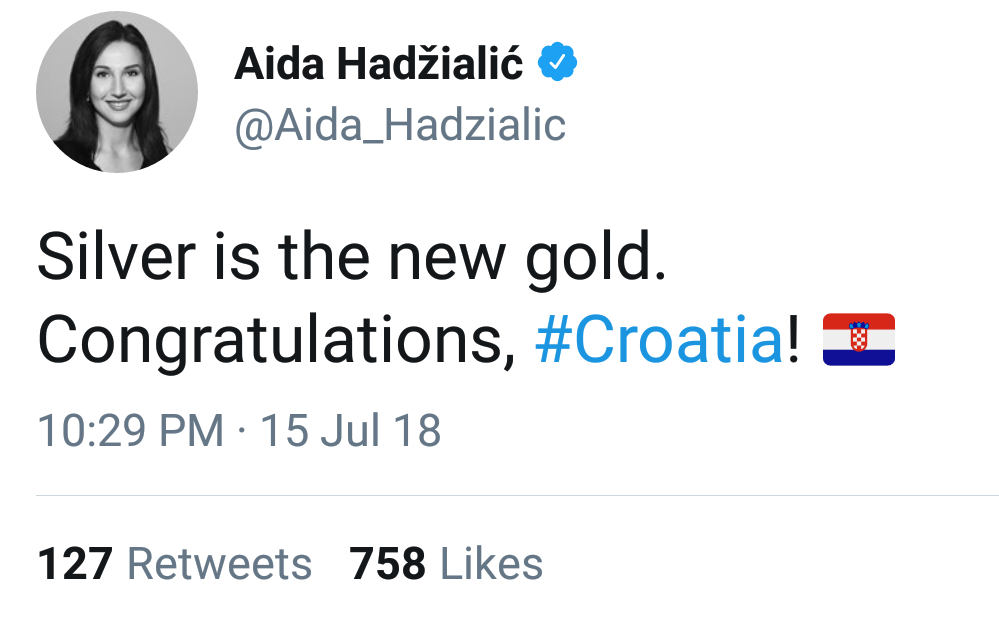 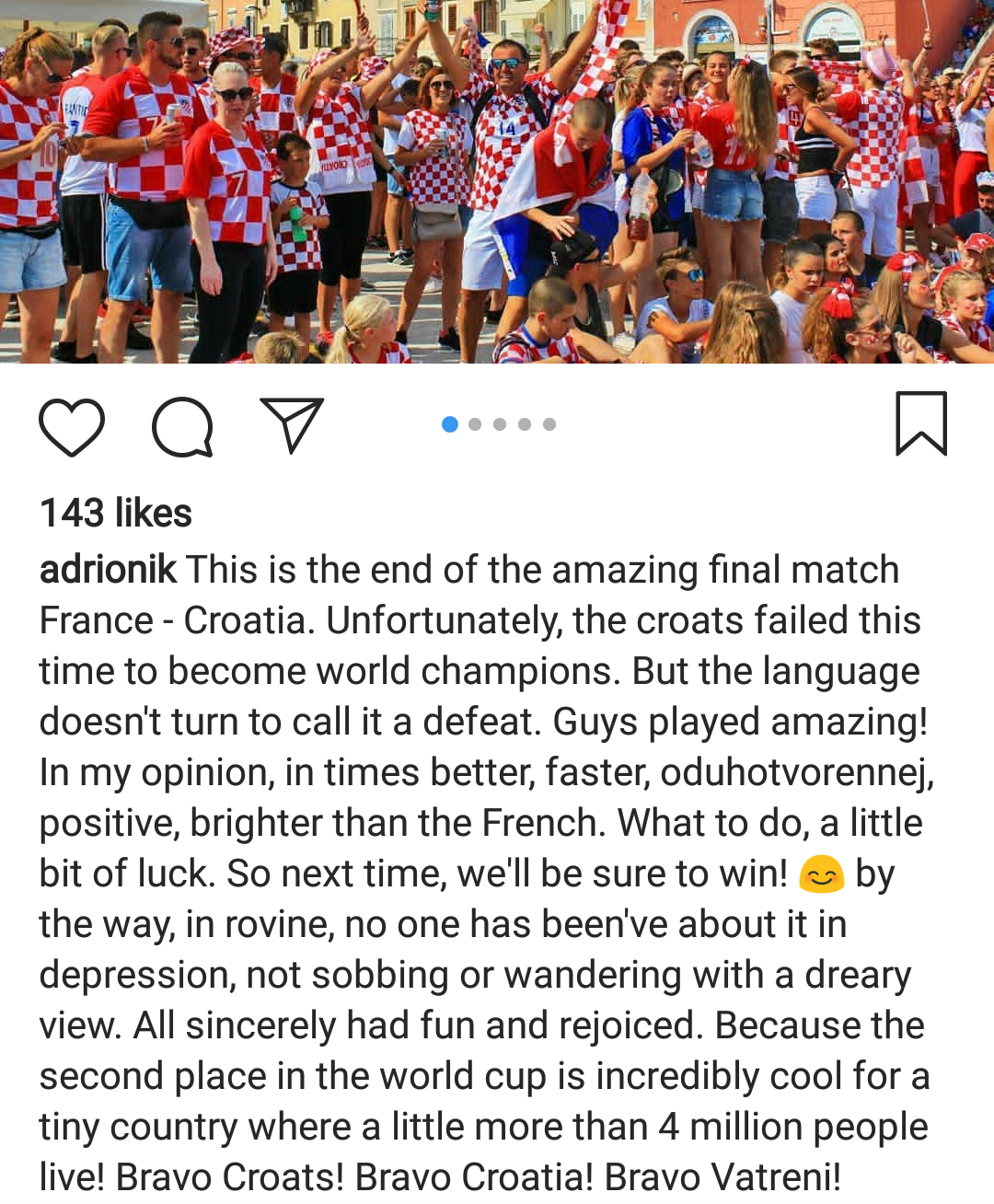 In the post-match press conference, Zlatko Dalic, Croatia Manager and coach said, “We played well in the first 20 minutes, we controlled the game. Then there was an own goal from a set play. We came back to life, dominated and then the penalty was given.” "We are a bit sad but we have to be proud as well for what we've done." "They were all sad.... downcast. But I told them to hold their heads high. They have to be proud. Sometimes in football you lose and that is inevitable. We were dignified in victory and we have to be dignified in defeat. We have to respect the scoreline."

Dalic further added, “If you have a good team and you work hard, things can happen. For smaller nations like Croatia that is important. But first you have to have a dream, you have to have ambition and then maybe one day it will come true.”

Talking about Croatia’s most remarkable captain and best player of the tournament, Luka Modric, Dalic said, “He played a terrific tournament which is another commendation for the team which helped to bring about Luka's success. He did the lion share of our play and he was a deserved winner of the Golden Ball.”

France Manager and Coach, Didier Deschamps has become the third man in World Cup history to win the trophy as both a player and a manager. Deschamps was the former captain who led France to its first World Cup in 1998.

In the post-match conference after winning this year’s World Cup, Didier Deschamps said, “Difficult to say what France should be remembered for. France is the World Champion. It means we were better than the others. My greatest source of pride for this group is that they managed to have the right frame of mind for such a tournament. Are we a beautiful team to watch? It doesn't matter. We are the World Champions and we are champions for the next four years.”

Deschamps further added, “I have never seen and lived through such a World Cup. There was a levelling at the top. The small teams arrived very well prepared with defensive systems that were simple to implement. Teams that had the ball and control were hit on the counter.I don't know if it was a beautiful World Cup. But this was a difficult World Cup from the athletic and intensity point of view. The smaller teams has a far greater work-rate.” “When my team won, I told them two things: One: You are going to be linked together forever... nothing can separate you. Two: You are World Champions, you are different. Things will be different now.”

His jubilant France players crashed and interrupted the post-match press conference in celebration and the players soaked their manager, Deschamps in champagne have gone viral all over the Internet. 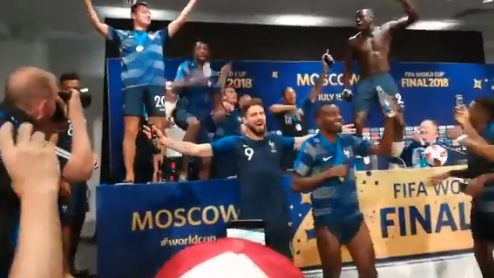 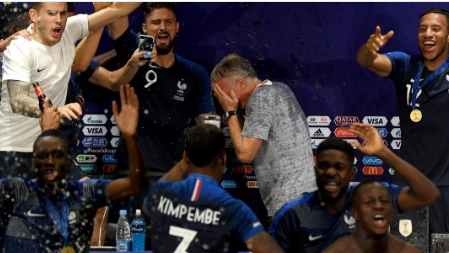 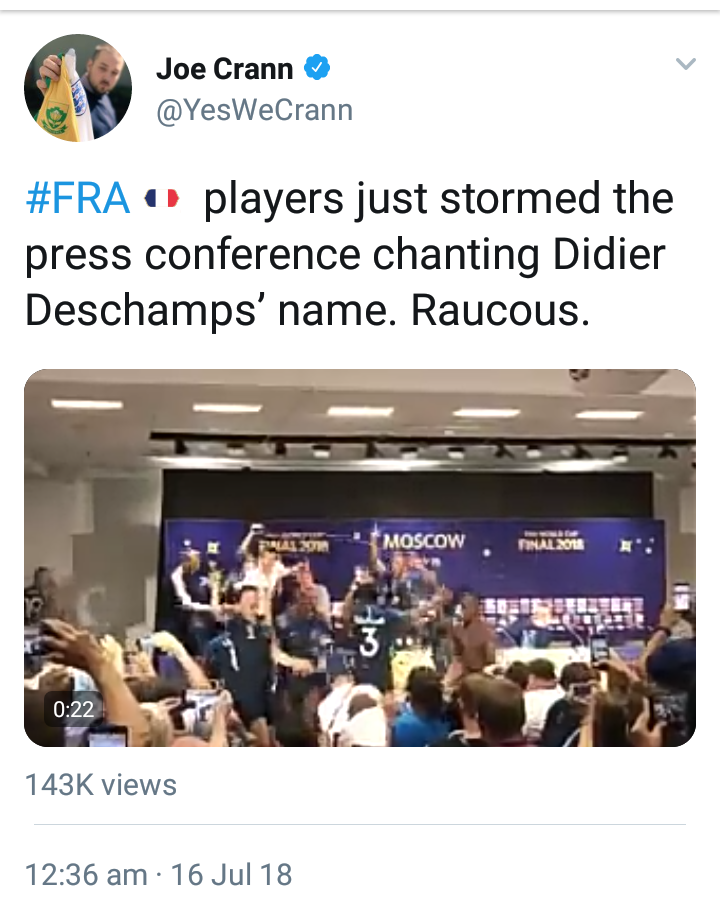 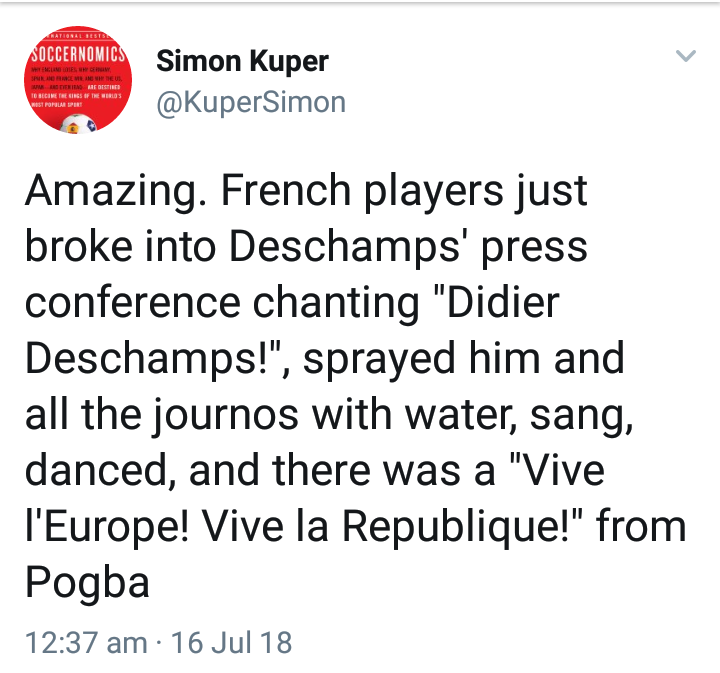