The stark difference between Rahane’s home and away batting performances

One of the major highlights of Ajinkya Rahane’s Test career right since the beginning has been the stark difference between his home and away batting performances. That is pretty much the case with most other Indian batsmen but there’s an anomaly in case of Rahane. He has a strikingly higher away batting average as compared to that of his home average and that is summed up by where he ranks among batsmen with a similar anomaly.

He is sixth on the list of batsmen who have higher away averages than their home ones after having played at least 30 innings. That makes him one amongst the rare club of batsmen who have enjoyed and found it more comfortable playing away from home.

But in the ongoing series against England thus far, he hasn’t looked to be in the best of touches. After two Tests and four innings, his scores read 15,2,18 and 13 respectively. That is an accumulation of 48 runs over four innings at a mere average of 12. The series is indeed a long one and there are still three more matches to go but time is really running out for Rahane.

He doesn’t have a single score of fifty in his last 13 innings. Seven of them have been back at home and six away. The highest that he scored in an innings was 48 runs in Johannesburg against South Africa back in February. It’s true that he has already proven his credentials on away tours right at the beginning of his career and playing at home has never been his forte despite being a beast with the bat in domestic cricket.

But the current Indian management and set-up under Virat Kohli’s captaincy have been known to select players more on the basis of recent form than their potential. Kohli has already shown that he doesn’t back down from axing players if they do not perform well for a certain period. He had already dropped Rahane for the first two Tests in South Africa citing poor home form as the reason and he will certainly not back down from dropping him again provided his poor form stretches further. And with so many young and talented players waiting in the wings to grab their opportunity, it’s time that Rahane realizes how important it is for him to perform in the remaining matches.

His career graph suggests that if not for the away games at the start of his career, he probably wouldn’t have flourished as a player. Who doesn’t like a home Test for starters? But it certainly didn’t go right for Rahane. He started his Test career with two single digit scores on debut at Delhi. However, he went on to become India’s go-to-man for overseas missions in the 17 consecutive away Tests he played afterwards. Centuries in Australia, New Zealand and England followed and he had amassed 1345 runs in that run of away Tests at an average of 46.37. Those runs also included a gritty 96 at Durban in South Africa and it seemed like India had found their overseas Messiah in Rahane.

After such a huge success in away conditions, it was time for Rahane to prove his mettle at home. It looked like it was going to be a cakewalk like most other Indian batsmen. For a certain period, it did too. After registering consecutive centuries in both innings against South Africa at the same ground he started his career with single digit scores, he went on to score 77 and 188 in the following series against New Zealand at home. And by October in 2016, both his home and away averages shot up to over 50. He was averaging 51.75 at home in 8 Tests with an accumulation of 621 runs. His away average of 51.22 was only 0.53 shy of that of his home as compared to the huge difference of 15.18 at present.

What followed afterwards has been an inconsistent home run having telling effects on his overseas exploits too. He has played 12 Tests at home and six away since then averaging 20.94 and 37.11 in those respectively. Those 18 Tests equal a total of 30 innings in which he has an overall average of 26.14 and accumulation of a mere 732 runs which includes a lone century—innings of 132 vs. Sri Lanka at Colombo in 2017—and just three fifties. His average has been the lowest among all Indian top and middle order batsmen who have played during this period. In fact, his overall average during this period has been even lower than lower order batsmen like Ravindra Jadeja, Wriddhiman Saha, Parthiv Patel and Hardik Pandya. 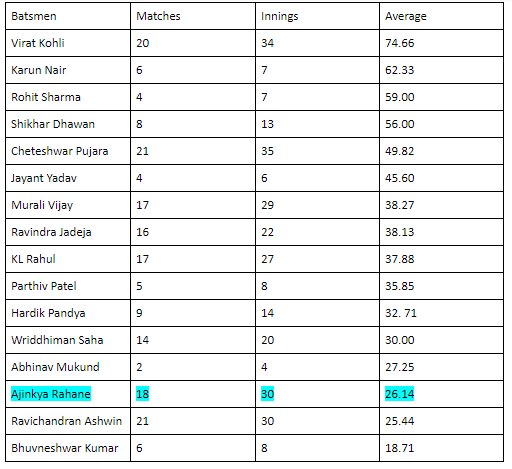 So, that sums up how it has not only been a struggle for him at home, the same has been the case for him in overseas conditions too.

The fact is that Rahane is in this team only because of the potential of tackling challenging overseas conditions that he had shown earlier in his career. That is the only reason that the team is still backing him despite his run of poor form lately. But he must remember that unlike other players who feature mostly across all formats, he is a regular part of the Test team only. So, a failure in this series could draw curtains on his career. If he wants to salvage it, the away Rahane needs to show up before it is too late.