India Script Fairytale Win, Aussies Back to the Drawing Board

A rare glimpse of the beauty of Test cricket

Much ado was made about India’s epic tour of Australia and also, about the return of the disgraced duo of Steve Smith and David Warner to Australia’s Test plans this time round. However, only one lived up to the hype and it was not the sandpaper-gate protagonists.

Written off as fluke winners of the last trip to Australia, India were practically consigned to the flames after their debacle in the Adelaide Test when they were bowled out for thirty-six runs.

This is what Michael Vaughan, former England cricketer, had to say:

“Told ya…India are going to get hammered in the Test series….#AUSVIND #4-0”

This is what two of former Australian cricketers said after the Adelaide disaster:

Ricky Ponting:
“There could be a good chance of a whitewash…With Kohli not being there…there’s almost no one to pick them up after a loss like that.”

Mark Waugh:
“I just can’t see how they (India) can bounce back after Australia whitewashed them on the third day…four-nil to Australia”

However, in a sign that this is a team too young and therefore, fearless and undeterred in the face of a shock defeat, the team rallied through a spate of controversies, challenges and injuries to pull off the unthinkable and make this a rather special overseas victory, upstaging the hosts in more ways than one.

Cricket Australia would like to maintain that they had been right all along to put all their eggs in one basket: banking on India’s tour down under to hand them a financial windfall, even trading off the ICC Twenty20 World Cup to put all efforts into making this tour happen at all costs. Although the result should lead to a shock introspection for the home team, in terms of grabbing eyeballs, India did not disappoint.

The last time India toured Australia, which now seems eons ago in the wake of the pandemic, lockdown and travel restrictions that virtually ensured that India faced no other Test before this tour since early 2020, Virat Kohli’s men pulled off a historic coup, the first in seven decades to put things in perspective.

This time though, the skeptics were in full flow, foaming at the mouth when India handed back the initiative in the first ever day and night Test between the two teams when they ceded the advantage to Australia in rather ignominious fashion.

Some Australian minds could not wrap their head around India’s team potential. But not everyone felt the same way.

Sachin Tendulkar said it aptly when he tweeted this after India’s sensational win in the final moments of the Brisbane Test, the fourth and final Test of the Border-Gavaskar series:

“EVERY SESSION WE DISCOVERED A NEW HERO. Every time we got hit, we stayed put and stood taller. We pushed boundaries of belief to play fearless but not careless cricket. Injuries and uncertainties were countered with poise and confidence. One of the greatest series wins! Congrats India.”

Indeed, if ever there was a case to be made for a boot camp initiation, it would be this tour down under, which began with a hard lockdown and then continued through a spate of controversies, some of which could have been entirely avoidable.

In the end India came through despite losing their mainstay batsman in the captain who was on paternity leave after the first Test by preplanned design even if it copped controversy in plenty. The team made an extraordinary comeback after being beaten in the first test in Melbourne, survived a barrage from Australia that was in poor taste in Sydney and pulled off a rare and remarkable back-to-back series wins on foreign soil, more specifically, Australia with the scintillating victory in Brisbane, going against history and against previous agenda when the imperative of the past would dictated them to ‘not lose the Test’.

The irritations for India began fairly early and only got worse as the series progressed.

If the captain openly expressed annoyance about the lack of clarity over Rohit Sharma’s availability in the early part, the injuries to Mohammad Shami and the unavailability of Ishant Sharma seemed to get compounded when Mohammad Siraj, the young bowler, got the news of his father’s demise.

In a brave move that is laudable, not only did Siraj stay back with the team but also, played a leading role in fashioning Australia’s downfall in the final Test. That has been only one of the kind of stories that have wrapped themselves around India’s superlative 2-1 series win.

To comeback from the shock defeat in Adelaide, to lose their captain and see the team rotate as many as twenty cricketers in the four Test series and still pull off consistent wins to level the series speaks highly of the maturity of a team still embryonic in terms of experience. To fashion a win under extraordinary circumstances points to promising signs for India’s healthy future, although Kevin Pietersen, the former England cricketer, was mindful to point out that Australia are not quite the pinnacle of the sport even if they have been hovering around the top spot.

If India bounced back almost immediately from the Adelaide shambles to win under Ajinkya Rahane in the second Test, that honour was only to get exponential as the series progressed.

Sydney provided a rare glimpse of the beauty of Test cricket which can be absorbing in a draw, an extraordinary result given batsmen’s exposure to Twenty20.

Ironically by the time the stage was set over the last day of the fourth Test when India were chasing over 300 runs for victory, while Pujara was once again sublime in providing the perfect foil, Pant switched gears to an audacious Twenty20-esque innings post tea to fashion a win in literally the final overs of the match.

If Shubman Gill has claimed a spot in the opening slot and showed the growth spurt of a raring young cricketer, he was joined by Rishabh Pant who must be considered the architect alongside Cheteshwar Pujara in terms of India’s resolute batting that kept danger at bay in the Sydney Test and then brought home an unexpected win in Brisbane.

For all the hype about the presence of Warner and Smith in this series in contrast to the previous series when the duo were serving one year bans for the infamous ball tampering incident in South Africa in 2018, India had unlikely heroes in Hanuma Vihari and Ravichandran Ashwin who managed to stand their ground and wear down Australia’s persistence in the remarkable endurance Test that was the draw in Sydney, this despite battling individual injuries of their own – Vihari with a hamstring injury that saw him miss the fourth Test and Ashwin with a back problem.

Similarly the bowling honours were shared between Shardul Thakur and Mohammad Siraj in the absence of experience. If Australia’s bowling attack was considered a force too formidable for team India, the spirited young Indian bowlers managed to put the Australians on the mat as match after match revealed. Additionally the fact that India’s tail unexpectedly wagged with the bat made the world of difference in how the final Test shaped and contributed to this fairy tale.

What India should also take away from this series is the stark difference between the way the two teams behaved throughout the tour. While Australia’s behaviour steadily deteriorated, India provided the grand gesture of presenting Nathan Lyon with a signed shirt to commemorate the Australian spinner’s 100th Test, a move that stunned not just Lyon but also, the cricket world.

Steve Smith did make a mark on the series but not quite the way Australia would have wanted.

Although he might have been a huge matchwinner in the Ashes upon his return in 2019, Smith became once more the cynosure of all eyes after he was seen not just shadow batting during India’s mammoth innings to save the match for a draw at the Sydney Cricket Ground. He appeared to be surreptitiously using the bottom of his boot to remove Rishabh Pant’s guard at the batting crease.

It has to be remembered that it was Pant who was keeping the scoreboard ticking at the time while leaving the Australians frustrated, narrowing missing a century by three runs but playing a memorable innings to ensure India went into the final Test scores intact as they left in Melbourne at 1-1.

It was a tough sell for the Australian captain to then sell this mannerism as one of Smith’s many “quirks”. The audacity and the déjà vu feeling when Smith talked about being disappointed and going through trauma because of it as he claimed similarly after playing an active role in the sandpaper-gate drama as the captain of the team only painted the prolific batsman in a rather bad light.

Losing the home series to India for the first time in seventy years was bad enough the first time around. Counting on India’s affirmative response to tour Australia despite the pandemic resurgence and then casting aspersions that India were shying away from the challenge in Brisbane when they complained about restrictive allowances, Cricket Australia will walk away with their coffers richer although their trophy cupboard is conspicuously empty for a second time.

Looking back, Australia might want to look to plug the chinks in their armour which would include the captaincy, ideally before the tour of South Africa. With Tim Paine going from being the captain who vowed to make amends after Australia’s fall from grace nearly three years ago to being the participant of unbecoming slander in the name of sledging behind the stumps to unsettle Ashwin in Sydney to defending Smith, the Australian captain might have bit more than he could chew.

The problem for Australia, unlike India, is finding a cricketer worthy of the calibre of taking on the mantle of the captain-in-waiting. In a final-nail-in-the-coffin scenario, Smith has plausibly and inadvertently wiped out his own chances in addition to Pant’s guard. Pant though could carry on, taking a fresh guard. The same might not be the case for the former Australian captain or indeed the Australian cricket team which must now go back to the drawing board. 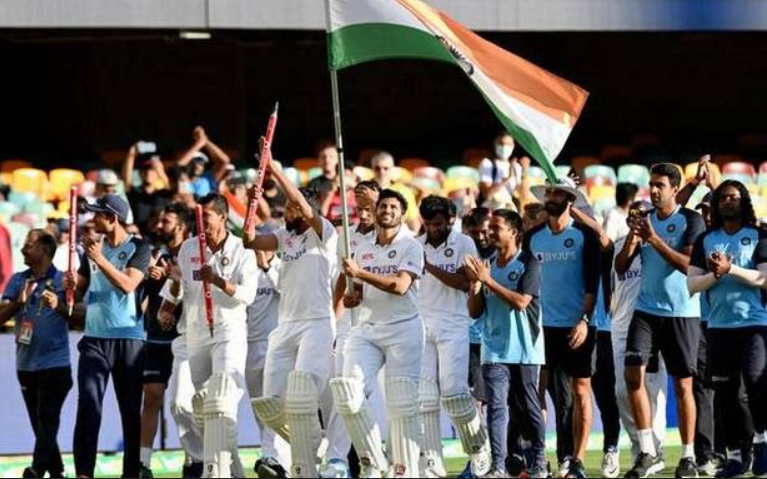