Few wicketkeeper-batsmen have been compared so early in their careers to the league of Adam Gilchrist, Mark Boucher, or MS Dhoni. But after his second tour of Australia, many now believe that Rishabh Pant is the road to India’s cricketing future.

As the team returns home for another Test confrontation with a rising England, Pant has put himself front and centre of the debate whether he should be played in the coming series.

One would think given his age and his recent performances down under, Pant would be an automatic selection.

To put things in perspective, Pant hasn’t played a Test on Indian soil since 2018, with the team management preferring Wriddhiman Saha in the role.

The argument, as Saha himself recently stated, is that he is “the better wicketkeeper”, and therefore the selection boils down to whether India need an additional batsman in the lineup.

Pant is on a learning curve and while his keeping does need work, it made sense even before the 2019 World Cup to groom him as Dhoni’s successor, a point lost on the management when he was not selected for the Indian squad.

Pant was not given the opportunity to serve as Dhoni’s understudy, being brought on only at a later stage as replacement player. To make matters worse, he was fatefully drafted in to play a pivotal role in the semifinal against New Zealand, that too in the number four slot, at a time when established batsmen including Dhoni himself were being questioned for their lack of initiative and energy in the critical innings.

For Pant to say he hit a low after that debacle – the selection bungling in the World Cup – is putting it mildly.

As if to undermine his confidence further, the management including head coach Ravi Shastri and the selection panel have since engaged in mind games, suggesting they would rather play Sanju Samson… basically anyone other than Pant, who is arguably a maverick batsman, and might with a little more support (and a wicketkeeping coach) be the difference between India almost making it and India becoming a cricketing powerhouse in the next decade.

The turnaround has been quite as remarkable as revelatory. Those who chose to deride him are now singing his praise.

Yet his keeping calls for significant improvement, under the tutelage of someone who knows the game inside out. His batting could still be described as reckless, as it has been often in the past and not always misguidedly, such as when he threw away his wicket on 97 runs at the Sydney Cricket Ground.

The one factor favourable to Pant is the belief he has managed to instil, that an Indian cricket team bereft of superstars can still be a force to reckon with. His virtual back-to-back innings at the SCG and the Gabba are evidence of the fact.

In both Pant played essentially the same game – the only game he knows how – taking the attack to the opposition and playing to his strengths, even if it meant a probable downfall was round the corner.

India might even recount the benevolence of Australian captain and wicketkeeper Tim Paine, who did drop a catch in Brisbane. Another sign perhaps that age and experience do not guarantee keeping excellence.

Significantly, Pant’s ambition to be the best wicketkeeper in the world signals that he is willing to work hard at his game, even if at present he must focus on sealing his place in the team as specialist batsman. His resumé after Australia will certainly earn him that nod – or it should.

Pant’s journey has been intertwined with India’s success. While Cheteshwar Pujara and a young Shubman Gill laid the foundation with the bat in the final innings chasing 328 for an unfathomable victory at the Gabba in the fourth and final Test of the Border-Gavaskar series, the game was set up by the likes of Mohammad Siraj, who bravely handling the personal tragedy of his father’s demise early in the tour picked up a five-for restricting Australia in the second innings.

And before that it was the unlikely duo of Washington Sundar and Shardul Thakur taking on the mammoth job of closing Australia’s first innings lead, and doing so with aplomb.

Nevertheless, the difference between a static 1-1 finish and India hoodwinking the Australians into complacent thinking was arguably Rishabh Pant, as the 23 year old paced himself with a proactive innings that saw an accelerated effort towards the end for a scintillating and successful finish to India’s sojourn Down Under.

That he reads the game well is on display. Now if he can be guided to apply that skill to his keeping, India will be a vastly improved team with consistent and phenomenal results.

This particular tour of Australia will stand out for India for many reasons, not least the fact that with the 2-1 series win the team etched history with its first back-to-back series win Down Under. Their first such win in 2018-19 took seven decades, but now the game is afoot.

Brisbane, traditionally considered Australia’s backyard and the graveyard of most visiting teams, India included, had remained Australia’s fallback for 32 years.

It took someone of the enigma of Pant who played positive cricket at Sydney and more mindfully as the game progressed into a commendable draw for India. He played the swashbuckling role to keep the scoreboard busy and then pulverised the hosts’ psyche with a combination of Test and Twenty20 skills for India to surpass the target and record a rare and historic win at the Gabba.

Pant showcased his mettle and calibre in a way few have done at 23 years of age. To have done so despite not being picked as a regular in the side – he was not picked for the Adelaide Test – shows the arduous journey Pant has already made in his still embryonic career.

Spotted in the Ranji Trophy season of 2016-17, Pant’s foray into the Indian playing eleven hasn’t been a fairy tale. He had to grapple with crippling comparisons to a legend in his own right, Mahendra Singh Dhoni, and was asked to fill those boots right away. He can blame his own rush of the blood and learning curve, or the many fans and critics who expected a clone to take Dhoni’s place.

The past twelve months have perhaps been the most testing for him and led to much soul searching. Despite his heroics in Australia, Pant is aware that he still has an uphill road ahead.

The odds of being selected for the playing eleven against England are still stacked against him, for the simple reason that the management have not shown much faith in the youngster in the past, choosing to believe Saha is better equipped, particularly in subcontinental conditions.

If that is so, India have a problem on their hands.

Pant used the opportunity in Australia to showcase his growth and potential once again, playing to win in the last two Tests, giving the team a lifeline in Sydney and batting up a rampage in the game changing knock at the Gabba. He upstaged the hosts and history, becoming the fastest Indian wicketkeeper-batsman to 1,000 Test runs – more evidence of his prowess.

Omitting him would be like throwing away the iron when it’s hot, malleable and ready to be shaped to the team’s needs.

Even if Saha is “the better wicketkeeper” he is 36 years of age, while Pant is only 23 and can still be groomed. And unless he is thrown into the deep end (again) it will be hard for him to see where he stands and how far he has to go before he can match his footsteps with the greats.

To Pant’s credit stands the manner in which he is making himself indispensable to the team. But the challenges that await him are much greater. They will test his strength when it comes to withstanding selection concerns, and taking on the challenge to vastly improve his wicketkeeping – the original skill – that will make him an integral member of the Indian cricket team that is newly shaping up, and has the potential to be the toast of the coming decade. 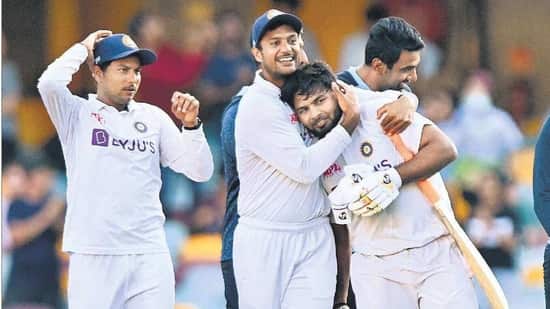