Records are made only to be broken is the well known cricketing cliché and these days with the proliferation of Test matches no record would appear to be safe. So it is truly remarkable that a partnership has remained an Indian record for 60 years.

The first Test between India and Pakistan in the 1960-61 series at Bombay (now Mumbai) promised to be a run feast. The Brabourne stadium pitch was ideal for batting and this being a contest between India and Pakistan it was taken for granted that the runs would be notched up at a slow pace and a high scoring draw seemed to be the only result even as the match got underway on December 2 1960. The match duly ended in a stalemate but there were many twists and turns to keep the capacity crowd entertained.

Nari Contractor leading India for the first time lost the toss and Pakistan made the most of getting first strike by running up a total of 241 for one by stumps on the first day. Following the early loss of Imtiaz Ahmed Hanif Mohammed and Saeed Ahmed came through unbeaten with the former on 128 and Saeed on 94 within striking distance of three figures.

They raised the second wicket partnership to 246 before Hanif was run out for 160. Now came about a dramatic collapse with leg spinner Subash Gupte being the wrecker-in-chief. Pakistan slid sharply from 301 for one to 350 all out with Gupte finishing with four for 43. Saeed was one of his victims being stumped by Nana Joshi for 121.

India’s reply was along predictable lines with most of the leading batsmen among the runs. Contractor opening the innings led the way with 62 and the middle order made valuable contributions.

Vijay Manjrekar made 73, Polly Umrigar 33, Chandu Borde 41 and Bapu Nadkarni 34 but the pace duo of the experienced Mohammed Hussain and Mohammed Farooq making his Test debut did not allow any Indian batsman to run up a sizable score. The result was that midway through the fourth afternoon India had lost their eighth wicket with the total 300. No 10 Ramakant Desai joined No 9 Joshi with the crowd eagerly looking forward to a keen contest for the first innings lead even as a draw was a foregone conclusion.

The two made for an interesting contrast. Joshi fairly tall was nearly 13 years senior to Desai and had played his first Test in November 1951. Desai, 21 was India’s pace spearhead but was nicknamed `Tiny’ for at about 5 feet, 6 inches he did not have the imposing physique of a fast bowler. He had made his debut like Joshi at New Delhi but in February 1959.

Any hopes that Pakistan might have had of dismissing one of them quickly and then getting last man Gupte out and end up with a small first innings lead quickly evaporated as Desai and Joshi adopting contrasting methods blunted the attack. While Joshi who occasionally opened the batting for his state Maharashtra concentrated on defence Desai with youthful bravado played strokes freely frequently finding the boundary.

Early in the post-tea session the crowd had plenty to cheer as India went into the lead and by stumps the two were still at the crease. Joshi was 29 but Desai had raced to 60 with the score 396 for eight.

Even as the match was doomed to a dull draw there was considerable interest on the final day as to how long the duo would bat on. First they brought up the 100 of the stand and then continued to bat confidently. Pakistan captain Fazal Mahmood made quick changes but nothing disturbed the concentration of the ninth wicket pair who simply surged on. Desai crossed 80, Joshi went past his half century and suddenly the world ninth wicket record came sharply into focus.This had stood in the name of SE Gregory and JM Blackham of Australia who had added 154 runs against England at Sydney way back in 1894-95.

Joshi and Desai came within a stroke of overhauling this famous record putting on 149 runs and the crowd’s excitement was palpable. However much to their disappointment Desai aiming a mighty blow was bowled by Hussain for 85 and that was the end of the entertainment for the large crowd.

The two batsmen came back to the pavilion to a standing ovation as Contractor declared at this juncture with the Indian total 449 for nine. Desai was suddenly a batting star having played for 206 minutes and hitting seven fours but there was praise too for Joshi who had batted 3-1/2 hours for his unbeaten 52 hitting three boundaries.

It was the highest Test score for both. In fact it was Joshi’s last Test for though he had batted heroically his keeping was not up to the mark. Hussain finished with five wickets and Farooq with four but the men of the moment were clearly Joshi and Desai whose partnership of 149 runs for the ninth wicket remains unsurpassed after 60 years despite several other Indian partnership records falling by the way during the last six decades. Their stand is also a tribute to tail- enders who over the years have proved what courage and determination can achieve. 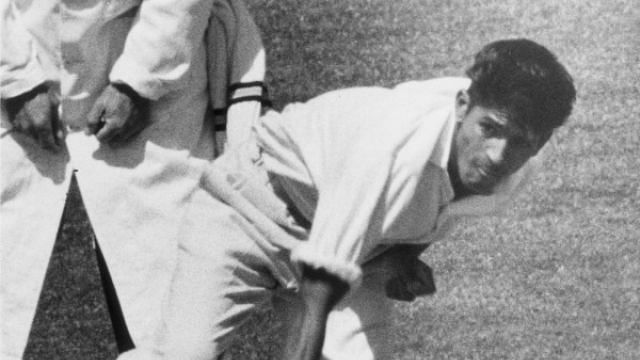 India Pakistan Ceasefire - Why? 21 seconds ago

Manual Scavenging - Not Just Inhuman But a Crime 13 minutes ago