When Kapil Dev Averted the Follow On With Four Successive Sixes

Kapil Dev is arguably India’s greatest cricketer ever. His overall record in both Tests and ODIs compares favourably with those of the the finest cricketers from other teams and many of his achievements are part of cricketing folklore. But even by his lofty standards the feat he pulled off in the Lord’s Test against England in July 1990 has to be ranked up there with the best.

When Mohammed Azharuddin inexplicably sent England in to bat on the opening day on a perfect surface it was clear that India were in for a long stint in the field. Hardly anyone however could have bargained for what actually happened. England amassed 653 for four declared, the captain Graham Gooch scored 333 – the highest against India – while Allan Lamb (139) and Robin Smith (100 not out) also chipped in with three-figure knocks.

Gooch and Lamb added 308 runs for the third wicket and by the time the captain was fourth out at 641 he had made the highest score in a Test at Lord’s, the third highest by an England batsman in Tests and the sixth highest score overall.

India started their reply late on the second day and with the wicket still good for batting the stage was set for a suitable reply. Opening the batting Ravi Shastri came up with a typically obdurate 100. Dilip Vengsarkar who had made hundreds in his three previous Test appearances at Lord’s this time was restricted to 52. But Azharuddin dazzled with a stroke filled 121. Still when Kapil joined his captain late on the third day India at 348 for six were some way from avoiding the follow on.

On the fourth morning Azharuddin left early and shortly afterwards India suffered a double blow with Angus Fraser dismissing Kiran More and Sanjeev Sharma with successive deliveries. At 430 for nine India still required 24 runs to make England bat again. Narendra Hirwani a very definite No 11 came out to join Kapil who was on 53 and played out the last ball of the Fraser over.

So now Kapil had to take the all important decision. Should he try and farm the strike to prevent Hirwani from facing the bowling or should he just go for glory. Given his limited batting skills there was no guarantee that Hirwani could last more than a ball or two against fast bowlers Fraser and Devon Malcolm.

Gooch handed the ball to off spinner Eddie Hemmings. With no field restrictions quite a few were along the boundary line in case Kapil decided to play the big shots. He played out the first two deliveries and then decided to pick the straight field for special attention. The third ball of the over went for six and so did the fourth and the fifth. With one ball to go six were needed to avoid the follow on.

The options before Kapil were to nudge for one and keep strike against Fraser or to try and settle the issue by taking fate in his hands. It was a problem that the bravest of men would have shied from. Even as the huge crowd was abuzz with excitement and anticipation the suspense was heightened by Gooch and Hemmings debating for what seemed an eternity.

One reckoned that Hemmings would push the ball through quicker but he gave it some air. In a trice Kapil jumped out of his crease and in his haste slightly sliced the shot. But the power behind it was such that it carried all of twenty yards outside the boundary. The Indian total jumped to 454 and the follow on had been averted in the most gloriously unexpected manner.

Hirwani was out to the first ball of the following over leaving Kapil not out on 77. It was only then that the enormity of what Kapil had achieved sank in. He became the first cricketer to hit four successive sixes in a Test and while that in itself made him part of cricket history the storybook manner surrounding the events on the field elevated the feat to an even greater degree.

Indeed when asked whether any other cricketer would have opted for four sixes in a row to avert the follow on Geoff Boycott put it succinctly. ''Maybe Ian Botham because he and Kapil don’t think like normal men do they?’’ And Wisden described it thus: ''Three of the sixes were enormous, clattering the scaffolding, one was simply big, all were magnificent.’’

England with Gooch adding 123 to his first innings 333 to notch up the highest tally of runs by a batsman in a Test went on win the match by 247 runs late on the fifth day but despite a plethora of splendid performances Kapil Dev’s feat did not go unnoticed and over the years it has assumed an aura all its own. 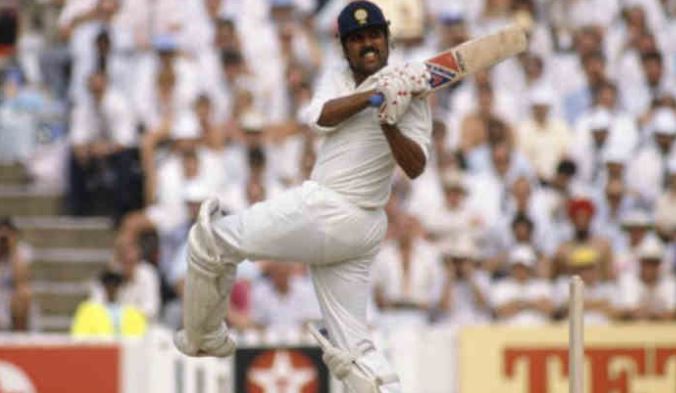