Own Goals: Kickoffs, Controversies and Catastrophes!

June saw some jaw-dropping moments from across the sports season

It must be the own goals season, with June seeing some jaw-dropping moments across the spectrum of a packed sports season.

From Lewis Hamilton to Virat Kohli, Rafael Nadal to Mats Hummels, there were several established champions whose pedigree and reputation was put to the test, not always converting to victory or laurels. 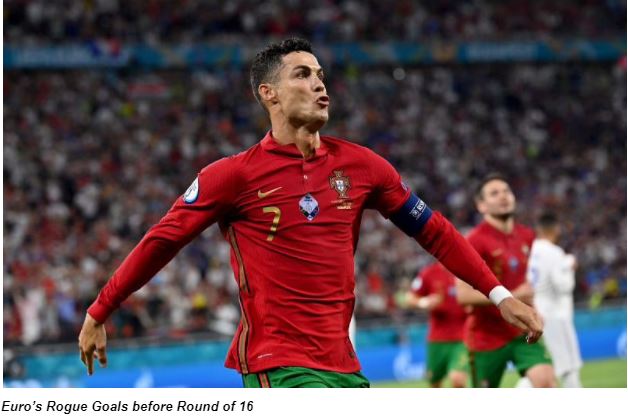 Football had a literal heart-stopping moment when Denmark’s Christian Eriksen collapsed on the field, in their early league encounter against Finland.

While fans worldwide breathed a collective sigh of relief after Erikssen was given a second lease on life, there was, less life-threatening but nonetheless, edge of the seat action from the postponed Euro 2020.

Group F, also known as the Group of Death, lived every bit to its billing as the final round-robin matches, before the clash of 16 saw the Group F points table shuffle around, even while eventual toppers Portugal and Germany waged a desperate battle against France and Hungary to join the likes of England, Italy, Netherlands and others in the quarter-finals.

And for a while, it did not seem that neither Portugal nor Germany would be able to pull through as France had set the benchmark and Hungary had performed well above their pay grade.

The own goals season has been in full force beginning with Germany who scored the only goal in their clash against France when returning defender, Mats Hummels, ducked one back in the net much to the chagrin of their outgoing coach, Joaquin Low.

Although Germany put up a more energetic performance thereafter against Portugal, despite Cristiano Ronaldo giving his team a leg up with an early goal, it was Germany, in turn, the beneficiaries as Portugal conceded not one but two own goals, trying to keep the Germans at bay.

Although Daei did it in 149 games between 1993 and 2006, the feat came in the thirty-six year’s 178th appearance while also, catching up with Germany’s Miroslav Klose for the most tournament goals at sixteen.

The story of “own goals” in the Euro 2020 will not stop as Slovakia themselves had a shock 5-0 loss in which they gifted Spain two of their own in the Group E encounter, making this more than a freak on time incident. 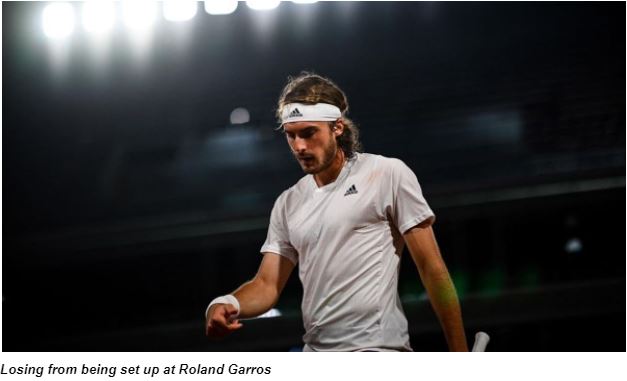 Stefanos Tsitsipas was beside himself on the winners’ podium; unable to break into a tear or a smile as the world no.1, Novak Djokovic, held aloft rather proudly the French Open trophy at Roland Garros.

His angst might seem misplaced, being the obvious underdog in the scenario, but the Greek had every reason to be upset with himself.

In the humdinger of a semi-final, between Djokovic and Rafael Nadal, that went into the wee hours of the day, after Tsitsipas had to put away an erratic Alexander Zverev, Djokovic eventually managed to trounce his long time opponent.

After the commentators could not help but air their doubts of Djokovic’s ability to bounce back, had he been two sets down instead of one in that crucial matchup against the veritable king of clay.

However, the world’s no.1 men’s player was quickly put to the test as he faced an unexpectedly tough proposition from the unrelenting Greek who might have eventually regretted continuing his strategy to play from far behind the baseline as the Serbian started to gain ground and momentum in the all-important final almost too late in the game.

Two sets up, the game was Tsitsipas to lose. However, Djokovic showed he is made of the stuff of champions, using every inch of leeway to force the youngster into making more errors, doubt himself and eventually find himself having to fight off championship points, to little avail in the end. 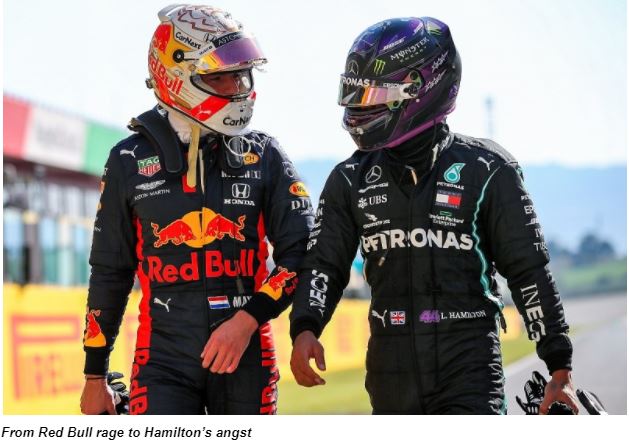 Tsitsipas has still a long tennis career ahead of him, but Lewis Hamilton must be feeling his age after being upstaged for the third race in a row by the unstoppable challenge from Red Bull and Max Verstappen.

For consecutive races in a row, in Monaco and again in Azerbaijan, the thirty-six-year-old British driver’s exasperated tone could be heard grunting, “How are they so far ahead?”

Unaccustomed to chasing the pack and playing catch up, Hamilton was found making unforced errors of his own in Baku, failing to brake on a turn with three laps to go after a red flag restart, after Verstappen was robbed of a podium by a dubious tyre degradation issue that saw his car become the second after Lance Stroll’s Racing Point to find itself in the wall barrier.

However, it was a sweet victory for Verstappen and Red Bull who outwitted the Mercedes in France with an unexpected two-pit stop strategy and an early stop that called Hamilton’s bluff on tyre wear.

Although, it appeared Red Bull had it all to do after that second stop.

Mercedes entered dangerous territory as pundits questioned whether Mercedes was holding back Valterri Bottas from challenging Hamilton, with a poorer pit strategy and thus, sabotaging their own overall interests, as Sergio Perez once again played the perfect foil to Verstappen and Red Bull’s ambitions with aplomb.

This now puts Red Bull in a rather unique position, ahead in the constructors’ championship and Verstappen extending his lead - albeit a slim one - over the seven-time champion going into the Styrian Grand Prix at the next weekend in what has been a hat trick of disappointments for Hamilton. 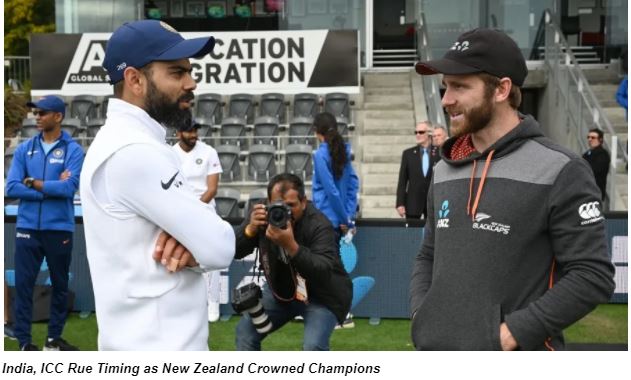 Of all the sports suffering a little bit under the weather, there has to be some sympathy shown for how the inaugural ICC World Test championship panned out.

For a tournament that waited ten years to see the light of day, questions have to be asked whether this was the best offer from the ICC in England’s wet season given the grandeur of the occasion and also, it is nascent beginning.

Incorporated to inject context and fresh fervour in the pristine five-day format, while the argument could be made for a test of skill and temperament in fickle weather conditions, two washed-out days out of five and an extraordinary situation of an extra sixth/reserve day is hardly the case to be made for an occasion as fitting as the ICC World Test Championship final.

Southampton might have felt like a watered-down affair for the Indian cricket team for more than just the inclement weather. Although the bulk of the game seemed to come from behind on days five and six, India’s efforts as the top dog left a lot to be desired when push came to shove.

It has now prompted their proud captain, Virat Kohli, to not only contemplate changes to the team but also, the possibility of warm-up matches before such tournament.

This after the horse had bolted the stables, while the BCCI’s focus has been primarily on the restaging and completion of the Indian Premier League ever since it had to be truncated under public duress at the height of India’s second wave this summer.

The possibility of a draw loomed large as disappointed fans stayed away from the television sets airing old footage, opting for the plethora of other live sports to chew on in this rare month of June of much sports in the post-pandemic era.

The International Cricket Council (ICC) might just mull the next venue as well as the challenge if it is to indeed further the prospect of Test cricket in front of a global audience spoiled for choices.

In the end, New Zealand showed the rewards for perseverance, tenacity and grit, shedding the tag of underdogs to put up a brave face and coming out on top.

India was left to question, not only some of the batting decisions on the final day including that of Kohli’s but also, of whether they had undermined themselves with a spin addition while New Zealand played to their strength in their pace quintet and also, the conditions.

Neil Wagner and Tim Southee played the senior hand while the lanky Kyle Jamieson played havoc on the Indian lineup, including making the Indian captain his bunny in the cricket parlance.

While Kohli blamed the weather for the early tough batting conditions, it has to be said that New Zealand hung on even when it seemed India had a foothold overnight on the fifth day towards pushing the match into a stronger position for themselves, even if in the direction of a draw.

Just when it seemed India had the firepower and defence to bat deep into tea, New Zealand, not only whittled the life out of India’s challenge with their outstanding bowling on the final day but then also, found themselves in the tricky position of chasing down a target that could well have been their undoing going for gold.

They would not have been blamed as New Zealand had made a mess of it, as they were still suffering the hangover over a World Cup robbed out of their hands after their epic tied match against eventually declared winners, England, in the ICC Cricket World Cup two years ago, almost to the date.

It was great to see old hands in batting mainstay Ross Taylor and the New Zealand captain Kane Williamson who played a captain’s knock in both innings steering their team through the trudges of navigating a deceptive modest target of 139 runs in an unlikely time frame of a final session when it would have been safer playing for a draw. 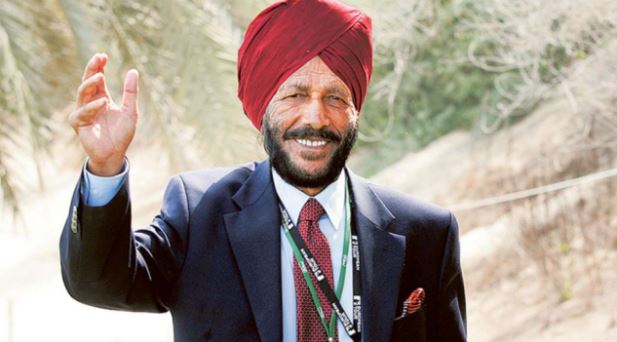 On an unrelated and sobering note, as the Tokyo Olympics enter crucial and rather controversial preparations, the Indian contingent is not only in a conundrum about their prospects of stunted preparatory time in the Olympics Village over discrimination about the delta variant of the virus but also, have now lost arguably their greatest, most passionate flag bearer in Milka Singh who passed away from post-covid-related complications in a brutal reminder of the heavy cost of this pandemic and the risks that a current lot of athletes are taking for that precious gold.

There is not much time for ruminations or reflections as sports goes into the deep end with a smattering of crowds passionately cheering on, whether at Wimbledon after tennis skipped the major Grand Slam last year for the first time since the World War or as the Euro 2020 reaches a crescendo.

India will head into a rare five-match Test series staying back in England while a second-string team does their bidding in the limited-overs format in Sri Lanka – perhaps a sign of possible future propositions.

Meanwhile, Hamilton will lock horns with Verstappen over the coming weekend in a bid to restore what will be some dignity on behalf of the pre-established champs.