That even multitime champions are not immune to desperate moments and erratic judgement was evident as Lewis Hamilton rather ostentatiously celebrated a very controversial victory at home in the British Grand Prix.

The reverberations from a weekend that should have been about a new car’s unveiling and the introduction of sprint races is likely instead to centre on the impact of this close shave on Max Verstappen in the races going forward.

By the end of the race on Sunday was forgotten the unveiling of a sleeker, more aerodynamic version of the F1 car for the 2022 season. And while the introduction of an intriguing sprint race to extend the qualifying process for grid positions should have been the talking point, what happened in the opening lap and the way Hamilton reacted to Verstappen’s dominance in the past five races (and indeed in the sprint race) took over.

At the start of the season, Hamilton’s warning about the danger of racing with an aggressive young driver like Max Verstappen had thus far not been realised. Even at the end of Sunday’s race, Hamilton preferred not to answer questions about his own move on the Dutchman, continuing to term Verstappen the aggressive one.

Yet Hamilton was clearly the one on the charge, choosing to overtake at one of the fastest racing corners on the circuit, playground of the once prodigious British driver, even though DRS would have been available in due time.

The high-impact crash less than a lap into the race seemed a foregone conclusion, even at the outset when the five lights went out, as Hamilton seemed to be reacting to criticism from Saturday’s sprint race when he did not manage a quick getaway despite being on pole after qualifying Friday. That allowed Verstappen to take an early lead yet again and then build a steady gap over the 17 lap race.

What seemed like an accident waiting to happen eventually did, at the Copse corner where Hamilton believed he had the racing line, when in fact it seemed he had caught himself between a rock and a hard place, clipping points leader Verstappen’s rear right tire and sending him hurtling fiercely into the barriers, to the terror of the fans behind the barricades.

Chasing Verstappen round every bend, making some audacious moves to get ahead, the first lap was unlike anything seen in recent years. It is possible that Hamilton also got carried away by the partisan fans, who were vociferous at every dash that he made to get past the unyielding Verstappen. The joust could only see one man go through and it did.

Although Hamilton was eventually handed a ten-second penalty after the restart, it would not be enough to keep the seven time champion away from the top of the podium.

Nor did it spare him the reaction from racing fans, that while Verstappen might have some way to go before developing the kind of composure to react strongly to Hamilton in the races ahead, Hamilton had shown a fragility in his own composure, the direct result of having one young gun in particular not only kicking at his heels but pushing past him.

It is arguable that after the kind of extended reign the younger Dutchman was enjoying this season that Hamilton was heading into the British Grand Prix under intense pressure. Although the British driver had signed a two-year extended deal with Mercedes over the Austrian Grand Prix weekend, it was generally believed that Hamilton had resigned himself to losing out on scoring a record eighth world championship title this season, which would explain the extension.

There was none of the reverential, muted response Hamilton has sometimes displayed even in the face of a stupendous win. Instead the thirty-six year old seemed in a world entirely his own as he jumped over the rails like hurdles and ran around as though he had just won the championship after the race restart.

Not winning five races and being 33 points behind the race leader can do that to you – an unaccustomed position for the champion.

The impact was such that Verstappen took his time getting out of the car, and appeared to be both limping and dizzy. He was escorted to the medical vehicle and thereafter to the hospital for a full check up after the high-impact crash.

That led to even stronger and very divided reactions between teams and fans, about whether Hamilton should have copped more than just a ten second penalty. Verstappen himself thought that it was undignified and unsportsmanlike for Hamilton to be celebrating the way he did after.

Michael Masi, the FIA’s F1 race director, was forced to react to the incident, reiterating that the punitive measures determined by the race stewards were based not on the impact but on the immediate incident at hand.

Masi also came under fire for suggesting that Mercedes team principal Toto Wolf talk to the race stewards while the incident was still under investigation and the teams were preparing for a restart following the red flag.

It needs pointing out that Masi was also heard responding, much to Wolf’s embarrassment, that he did not check his emails during the course of the race when prodded to do so.

Christian Horner, team principal at Red Bull, was not impressed by the hustle from the Mercedes pit garage, infuriated by the impact on his driver and also the manner in which it hurt the world championship.

Horner complained in subsequent interviews about the need to bar team principals from interfering while race stewards were still deciding on incidents. “I saw Toto who was lobbying with the stewards. I went to make sure our view was represented because I don’t think it’s right that team principals should be able to do that. They should be locked away so that they (the race stewards) are not influenced in any way.”

Horner was also vocal about what he thought of Hamilton, calling his victory “hollow” and describing the turn as “a desperate move that you wouldn’t expect from a seven time world champion. He’s seen no penalty for the action that he took. It doesn’t fit with the action or the move he made.”

Such was the furious exchange up and down the pit garage, before the race stewards eventually announced a 10 second penalty for Hamilton, that there were calls for Hamilton to be banned for a race given how badly he impacted Verstappen and his car.

Former and current drivers have restrained themselves from throwing themselves into the ring, preferring to sidestep the issue as a matter of racing incident. But if the clock were rewound, there have been plenty of instances when Hamilton himself, from the driver’s cockpit, instructed his team to report action on his counterparts for far less aggressive moves.

There were also replays doing the rounds of Hamilton’s run-ins with Alex Albon under similar pressure situations, and what that did to the mental state of Albon, now a reserve driver for Red Bull.

Lost in the cacophony over Hamilton’s outrageous victory was the fact that Charles LeClerc had led for much of the race after the top drivers clashed, and was two laps away from winning at Silverstone when Hamilton caught up to him. Comparisons were drawn about the overtake and how LeClerc might have been more conservative than others of Verstappen’s nature, and why it might have seemed that Hamilton had a cleaner overtaking manoeuvre at race’s end.

It could have been Ferrari’s race but LeClerc seemed to be having engine trouble, and although assured by his race engineer that the problem had been fixed it might have eaten into precious time that could have given the prancing horse some delight at the top of the podium. Although LeClerc appeared to be calm after the race, his disappointment was evident in the expletives he let loose shortly after crossing the finish line.

In another slice of good fortune, much like Azerbaijan when Verstappen’s car found the barrier and subsequently Hamilton threw away the opportunity of a win with a driving error, it could have been curtains for both teams had the race not been red-flagged.

If the news from the Mercedes camp is to be believed, Hamilton’s car too had taken significant impact from the contact and but for the race stoppage, the British driver might have been cooling his heels in the pit garage without the necessary time for repairs.

Besides the question of how Verstappen will react to Hamilton on the racetrack in two weeks’ time, there are bigger doubts being cast on the sprint race itself, as teams are now having to deal with caps on how much money they can spend on building and maintaining their cars.

With the addition of sprint races and the potential for more damage to the car, particularly like the damage sustained by Verstappen’s car, which is set to significantly impact running costs even as a newer car is in the making for next season, the 145 million dollar cap (likely to come down by another 10 million dollars in the span of two years) will have teams rethinking the worthiness of extended weekends and the impact of such sprint races, which might be more volatile and make race days more high pressure, as the British Grand Prix just showed.

By classing the first lap action as a racing incident, there is now the danger of having set a precedent that could significantly up the cost of pressure-cooker weekends, both in terms of money as well as the race drivers. With two more sprint races set for 2021, fans and teams have a chance to find out. 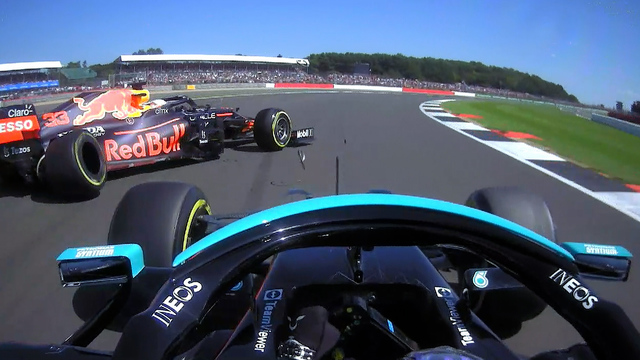