Can Ashleigh Barty Break Away From The Bunch?

No dominant player in women’s tennis since Serena Williams

Ever since the decline of Serena Williams there has been no dominant player in women’s tennis. This is the chief reason why the distaff side has been in the shadow of men’s tennis which has seen three all time greats dominate the game and sharing the spoils. The dramatic duel for supremacy between Roger Federer, Rafael Nadal and Novak Djokovic which has been going on for well over a decade has constituted arguably the greatest phase in ATP history.

In the past there have been great duels for supremacy but generally there have been between two players and in any case has not lasted beyond for a few years. Today’s fans are fortunate that they are witness to something that has not been seen in tennis history. And as if this is not enough there is a talented quartet of GenNext players in Daniil Medvedev, Alexander Zverev, Stefanos Tsitsipas and Dominic Thiem who have for some time been hot on the heels of The Big Three.

Unfortunately the same cannot be said about the women’s game. In the last 40 years there have been three all time greats in Martina Navratilova, Steffi Graf and Serena Williams who between them won 63 Grand Slam singles titles. They left their stamp on the game with their dominance and dynamism and interest in the women’s game was at an all time high thanks to their larger than life personalities and superhuman fests.

In the last few years (Serena won her last Grand Slam singles title at the Australian Open in 2017) it’s been a rather crowded field at the top as far as women’s tennis concerned. The Grand Slam titles have been shared over the last five years by about a dozen players, the No 1 ranking changes almost every month and while it is good to see fierce competition the lack of a legendary player means that interest in the women’s game is rather unenthusiastic. However great some of the current players are they lack the spark, the charisma that has almost always been associated with the women’s game.

Based on her current status the question has to be asked whether Ashleigh Barty can provide the sparkle that women’s tennis so desperately needs. Her storybook feat last month of an Aussie girl winning the Australian Open lifted her several notches in the eyes of tennis fans and experts. She has won three Grand Slam singles titles, is currently ranked No 1 by a long way and has the all round game – a strong serve, speedy court coverage, accurate ground strokes, an ideal temperament - to reach greater heights. Moreover her three Grand Slams have come at the Australian Open, the French Open (2019) and Wimbledon (2021) which highlights the versatile aspects of her game. In her own way she also has a certain charisma hence the all important query – can she break away from the bunch and stamp her authority on the women’s game.

If there is one player who can do so it has to be the cheery, always smiling 25-year-old Aussie who has the girl next door image. But make no mistake, she is very focused, ambitious and hungry for further success. She certainly has it in her to beat back the challenge from several other contenders, all good enough to win Grand Slam titles and be ranked No 1 during their careers. Yes, players like Barbora Krejcikova, Karolina Pliskova, Garbine Muguruza, Iga Swiatek, Emma Raducanu, Elina Svitolina, Victoria Azarenka, Angelique Kerber, Simona Halep, Petra Kvitova and Jelena Ostapenko are all in this category while the fast rising Aryna Sabalenka (currently world No 2), Danielle Collins who lost to Barty in the Australian Open final and Paula Badosa currently ranked No 5 are serious Grand Slam contenders this year.

Yes, it is a strong field that Barty is up against but as I said she has the game and the skills to provide the sparkle in the women’s game and in the process take her place among the greats. 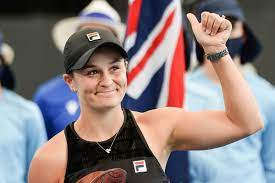