The Thomas Cup triumph, is one of the greatest feats in the history of Indian sport

Brilliant performances by individuals, both men and women, had made it clear in the last couple of years that India was on the way to becoming an international badminton powerhouse. The recent Thomas Cup triumph – surely one of the greatest feats in the history of Indian sport – confirmed this exalted status.

In joining the exclusive group of five – Indonesia, China, Malaysia, Japan and Denmark – who had won the coveted trophy before India triumphed at Bangkok, the team completed an astonishing achievement. The manner in which the victory was scripted with a quarterfinal win over Malaysia, a semifinal victory over Denmark, then getting the better of Indonesia in the title clash by wrapping up the tie within the first three matches was straight out of the books.

Yes, India were not outsiders going into the tournament as the sixth ranked team. But then the competition at the top of world badminton was so intense that few gave India a chance of making it to the semifinals, let alone winning the trophy. India’s best performance before this was a semifinal entry in 1979 in the days of Prakash Padukone. It must also not be forgotten that powerhouses like China and Japan were among the participating nations this time.

This historic Thomas Cup triumph was a culmination of the healthy state that Indian badminton finds itself in. The upbeat mood can be traced to Prakash who was the path breaker, and whose victory in the all England tournament in 1980 gave badminton the required impetus. But even as he emerged as one of the best players in the world he was still a lone figure. Then P. Gopichand came and his all England title win in 2001 gave badminton another push. In the last decade good players have emerged in both the men’s and women’s sections.

One would like to think that this is the result of a systematic and scientific approach. Both Prakash and Gopichand run academies in Bangalore and Hyderabad with first rate amenities and facilities. All the top players have benefited from practising at these centres. There have been other such training centres in various major cities in the country and the result is that quality has emerged out of quantity. When you have four men players in the top 20 in the BWF rankings then obviously the country is a powerhouse.

PV Sindhu and Saina Nehwal have ensured that the women are not far behind. Their performances have kept the Indian flag flying at international events, more than the men. Both Sindhu and Saina have been the cynosure, one for being a world champion and two-time Olympic medalist, and the other for rising to the No 1 spot in the BWF rankings.

Right now though with the women being eliminated at the quarter final stage of the Uber Cup at Bangkok, the spotlight is firmly on the men. Going by their stupendous achievement there is every reason to believe that Indian badminton can go from strength to strength.

Events at Bangkok underlined the fact that this is the finest team to represent India, a point that Prakash has stressed on. He also said each member is playing up to his potential and the importance of victory in the doubles. Lakshya Sen and K. Srikanth achieved their victories in the final against higher ranked opponents. Then there was the never-say-die attitude symbolised by H. S. Prannoy’s showing in the semifinal against Denmark. The teams were deadlocked at 2-2 and in the decider he was up against the higher ranked world No 13 Rasmus Gemke. Playing with his ankle strapped, Prannoy aggravated the injury when he slipped on the front court while going for a return. He took a medical timeout, and after receiving attention from the doctor courtside, continued but was clearly in pain. His movements were restricted and he lost the first game. But encouraged by his vociferous teammates he came back strong. He was still struggling but controlled the front court and defying the injury he produced a sensational performance to come up trumps 13-21, 21-9, 21-12 to etch India’s name in the history books.

In the final it was the turn of the doubles pair of Ranki Reddy and Chirag Shetty to defy the odds. They lost the first game 21-18 and the Indonesian pair had four match points in the second game. But the Indian duo fought back each time and ultimately took the game 23-21 before clinching a thrilling decider 21-19.

In his own way Lakshya too symbolised the team’s never-say-die attitude. The leading Indian player was ill at the start of the tournament and missed the preliminary rounds. In the opening singles in the final he still looked out of sorts while losing the first game 21-8 before coming back strongly to take the next two and give India an important lead.

For all the glorious deeds of several individual players, the Thomas Cup triumph is something special. As the victorious team manager Vimal Kumar, who has seen it all over 40 years as player and coach, put it succinctly this has to be the “greatest achievement’’. He said, “we had Prakash winning the all-England in 1980 and then Gopichand winning it in 2001. Saina and K. Srikkanth became world No 1, P. V. Sindhu won the world title and became a two-time Olympic medallist. But to win the biggest team title in the sport is something very different.”

Yes, there is something very satisfying about a team triumph that no individual glory can match. And while it is celebration time one must also keep in mind the need to build upon the gains and not rest on the laurels. In this regard it is gratifying to note that the Badminton Association of India has appointed 30 coaches who will be sent to different areas in the country to spot talent. 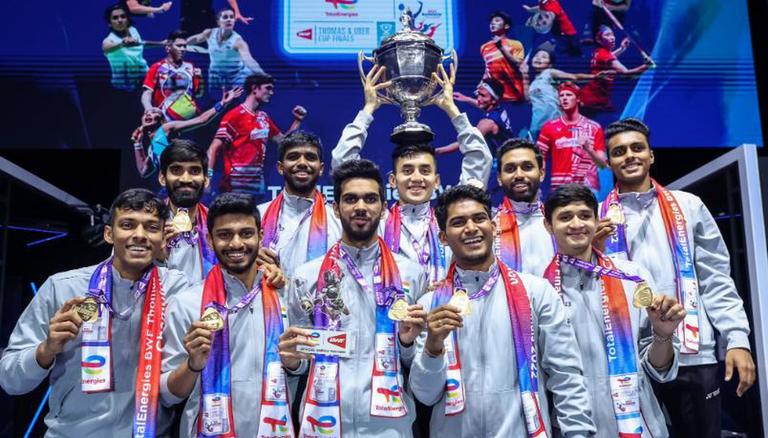