There Is An India That Is Not the BJP: Opposition MPs Defy Govt, Meet Mirwaiz, Yasin Malik

NEW DELHI: Four leaders from the Opposition--sent out a strong message during a visit to Srinagar that the decision to keep the Hurriyat out of a dialogue process was largely limited to the BJP and perhaps its coalition partner but was not the consensus of India.

The MPs ---Sitaram Yechury (CPI(M), Sharad Yadav (Janata Dal(U), Jaiprakash Yadav (Rashtriya Janata Dal) and D.Raja (CPI)---left the official venue after the first meetings set up by the government, and drove straight to the residence of Hurriyat leader Syed Ali Shah Geelani. The ageing leader was a bit reluctant, but the reasons were explained to the MPs by others from his organisation and family.

The MPs then went to meet Hurriyat leader Mirwaz Umar Farooq and JKLF chief Yasin Malik who are both under arrest at different locations. D. Raja told The Citizen that they had a “very warm and friendly” meeting with the two leaders. As Raja and the other leaders said, “there was no hostility, in fact they were warm and receptive.” 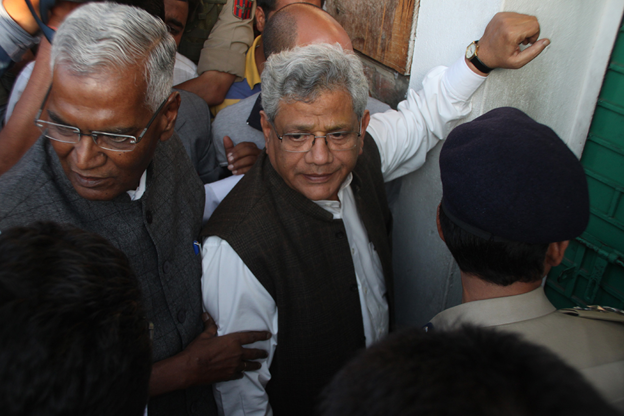 This has been a major step, ending the freeze that the BJP and the PDP have sought to legitimise in the Valley. CM Mehbooba Mufti at the meeting with the delegation claimed that her party stood for dialogue with the Hurriyat, pointing to the last minute invitation she had sent to them to meet the parliamentary delegation. As sources close tot he Hurriyat said, “they are all in jail and now she is trying to humilate them with this invitation.”

The BJP leaders including Union Home Minister Rajnath Singh who led the 29 member parliamentary delegation to the Valley today, have all spoken against any dialogue with the Hurriyat leaders. The result has been almost two months of continuous protests, curfew, violence with 70 plus deaths, 200 plus blindings, and 5000 plus injuries of largely young people who have been at the forefront of the protests.

Despite repeated pleas from within Parliament where the Opposition forced a discussion on the Kashmir issue in both Houses, and from delegations to Delhi led by former Chief Minister Omar Abdullah, the government has refused to open the doors for an unconditional dialogue. Instead the BJP and its affiliates have sought to project the Kashmiri protesters as terrorists and pro-Pakistan militants. This has been challenged now by the Opposition that broke the logjam by reaching out to meet the Hurriyat leaders, with the four MPs refusing to stand on ceremony, and driving to meet the Hurriyat leaders.

This has been a major move, as it comes after two years where as Mirwaiz Umar Farooq told The Citizen earlier, the Hurriyat leaders had been subjected to a propagandist attack by the BJP, its affiliates and certain television channels. “We have been attacked, we have been all kinds of names, we have been branded as terrorists by Delhi, what has not been said,” the Mirwaiz said. His father incidentally was killed by what is largely perceived in the Valley as pro-Pakistan elements as he had favoured a dialogue with Delhi.

The Opposition MPs reached out after a process of consultation with Kashmiri intellectuals and others, who insisted that they reach out to the separatists, and move the process towards unconditional talks. Senior legislators of the Congress, National Conference and even the PDP from the Valley said that the mainstream political parties were being made irrelevant in the Valley. “No one is listening to us, no one is even listening to the Hurriyat, and it is imperative that a process be started where some relevance flows back to those who do not want violence,” was the consensus.

The Opposition in reaching out to the separatists has demonstrated very categorically that the Indian voice is not limited to the BJP, and that there is a democratic space comprising political parties and people who are clear that the dialogue should be inclusive, and involve all stakeholders including the Hurriyat.

This is a major move also to puncture the nationalism debate, being so vociferously pushed by anchors claiming to represent the nation, where nationalism was being linked to war and conflict, and the arrest of the separatists. Kashmiris were being branded as militants, and by going to meet the jailed leaders the Oppostion of India has demonstrated that there is a second important view represented in this reaching out.

The Opposition MPs have given a list of demands to the government that include unconditional dialogue, immediate stoppage of pellet guns, removal of the Armed Forces Special Powers Act. Minister Rajnath Singh did not agree to any of these demands but the sources said that the visit now will be followed with other political delegations, and increasing pressure on the government to move from the militaristic mode to the dialogue mode without delay.