NEW DELHI: They have been entertaining Delhi households for decades with their puppets and their magic, weaving stories and making birthday wishes come true. Born and brought up in what is popularly known as Delhi’s Kathputli colony, on the outskirts, these poor artists are now are being threatened with demolition as bulldozers and the police move in to physically push them out of the homes they have known for 50 years.

From the Shadipur metro station, we are led to Kathputli Colony ground by Muskan, an eight-year-old girl, carrying her fifteen-month sister on her shoulder. Around ten to fifteen families are camping here for the past three weeks to escape another round of attacks by the Delhi Police. It was only six months ago that the police forces had allegedly beaten the families, including women and children, in the middle of the night in an attempt to force them out of their homes.

Here we meet Ameen Khan, a father of five sons—all of them magicians like their father, and four daughters. Ameen has been a magician since his bear show business came down after he could no longer pay the lawyers for his case against Maneka Gandhi, a longtime animal rights activist and present Women and Child Development Minister under the BJP-led NDA government in India.

Our attempts to calculate his age go futile, so instead we focus on the demolition issue: “I was born here, it is here that I have grown old. I want to die and be buried here. We have a family of more than 30 people, what will we get in the transit house? A 10-yard wooden room with no air, water and electricity, and what if we never come back to new houses here? Where will my children go? Today there is no difference between the police and the goons.”

Also on the ground are people who have never lived in a home, for instance, Muskan’s mother who is a rag picker, earning about a hundred bucks a week. She feeds a family of five daughters, a son and a husband who lost his leg in a recent train accident; she is a footpathi—meaning she is not eligible for the new rehabilitation centre at Anand Parbat as she does not have an address. Except for the pavement. 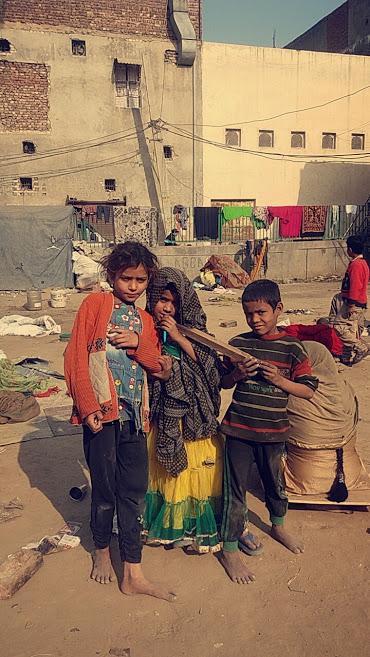 Passing through a hundred narrow lanes flanked by shanties, overarching leaking sewages, mounds of garbage alongside chulhas with its smoke choking the rurban air, we meet Lalita, a middle-aged woman in a traditional Rajasthani attire.

“We came here from Punrasar when I was just a little girl, as old as her,” she says pointing to a five-year-old girl playing by a hand pump that hasn't worked since 2002, the year it was built. “It is as simple as this: meri zameen, mera haq (my land, my right). We have lived here for the past fifty years, this land was built with the blood and sweat of my fathers; we brought earth and water to this wilderness that was nothing but a cemetery, and made it our dwelling. This is the root of our identities, we shall die but not leave our houses.” 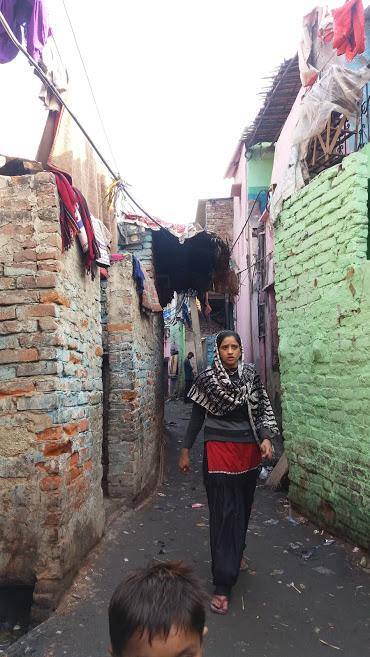 However, the demolition drive has divided families and communities. We find a grim picture of reality in these slums, a reality that has been haunting people for decades. The façade of demolition clouds in its powerful images the spectacles that have for decades impinged individuals, each in their own way; demolition for them is an escape, a glimmer of hope.

Lalita’s daughter-in-law, Taruna invites us for a cup of tea, she wants a patient listener to speak to. We go to a tiny pink room that is a kitchen, a bedroom with no beds, and a study area for her two sons, the room is a quarter the size of a football goal post.

We ask her about the fresh hideous-looking bandage on her forehead: “My in-laws are terrible people,” she anguishes. “My father-in-law’s brother comes home drunk and beats me up. They are all addicts, engage in black businesses, get stoned in my room and this is killing my children. They do not let me chop wood in my room for it’s too noisy for their ears, do not let me chop it outside for it dirties the place, do not let me bathe for it drains the entrance…I can’t exist here, I must escape for building a future for my children.”

Almost everyone living in this squalor is related to everyone, and domestic violence, prostitution, drug and sex abuse run rampant. Taruna feels that a liberation from her current state of being shall be a liberation from the adversities of her unkind life. Of course, she does not want her land to be taken away by the government or the corporates.

For the past six years, she has been struggling to protect her little share of space from a hundred relatives that have laid claim to it. “I hope they rebuild the area as the government has promised. We are poor people, with nowhere to go. I believe it is true that a poor man’s maledictions do bad to those in power if we face injustice,” she opines about not getting her land back. 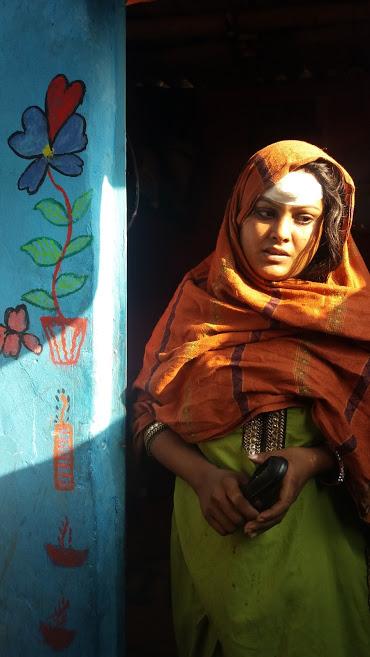 (Taruna, standing next to her little room, with a bandage on her forehead)

Our harrowing conversation about the disheartening life of Taruna is interrupted by a phone call from her mother. She takes out her small white Samsung feature phone that is tucked in her blouse and talks to her about the documents needed to register at rehabilitation centres in rapid Rajasthani. All she wants is a transit house in Anand Parbat where her mother’s family has already shifted to.

Around 500 families have already moved to their allocated residential transit houses but not all are happy with the development. People claimed that new complexes come with their own problems: there is a lack of water supply and it is impossible to carry the water uphill where the tenements are located, movement is especially difficult for old persons.

There is an utter lack of sanitation facilities; reportedly, the ratio of families to toilets is 50:1. “We have always cooked in the open, on chulhas, how do you expect us to cook there on wood with all the smoke?” remarked Ameen’s wife, too afraid to state her name, she believes the police will come at her again. Men said that they return from work as late as three and four in the mornings, there are scarce modes of transport in the region then. They are worried that they can be accused of theft in the nearby localities which are occupied by upper-class families.

Anita Sharafat, who lives in one of the transit houses with her three children and her husband, says that she has to travel for kilometres to drop and pick up her daughter, Sania, a student in I B in Shanti Bal Niketan School. The authorities had earlier promised a van for them, but it never came. Overall, she is happy with her new home but is looking forward to her own when the private company builds it up for her here in Kathputli Colony.

The Delhi High Court had in 2014 ruled that no person shall be forced to evacuate their homes unless they want to. The 28 petitioners reported that several names have been missing in the final list identifying the number of households in the colonies and if they are removed from the present settlement, they and their families would be rendered homeless.

They have also raised concerns about a lack of availability of space and facilities, especially with regard to peculiar requirements in view of the nature of vocations practised by them that include puppeteering, practising music, weaving and other performing arts, which require special skills and unusual equipment and gadgets. DDA had then stated that the issue raised with regard to the names of genuine households being left out, it is open to receiving representations from such aggrieved persons so that their grievance can be redressed in accordance with law. 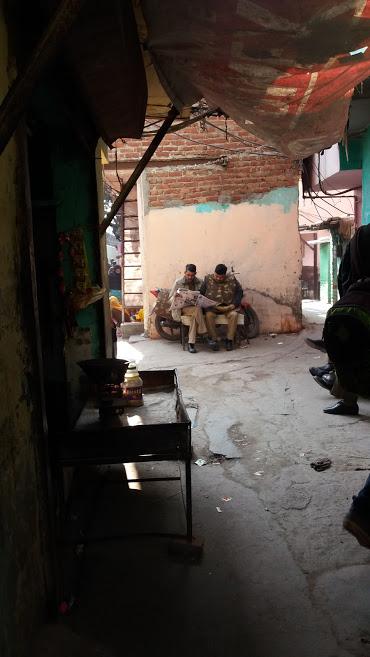 Activists had gathered at Dilip Pradhan’s residence where it was unanimously decided again that slips for moving to Anand Parbat shall not be signed. Dilip Pradhan is the voice leading the protest against the move to demolish colonies. “There is no proper agreement which assuages the fears of our people about our return to the colony. How can we accept such a deal that is aimed at serving the vested interests of the builders?”

However, J P Aggarwal, Principal Commissioner of DDA feels that the concerns are unfounded. “The unconvinced people are the ones with vested interests.” When asked about the enforcements including bulldozers, ambulances, firetrucks and riot vehicles, he says that they are aimed at “maintaining law and order.” 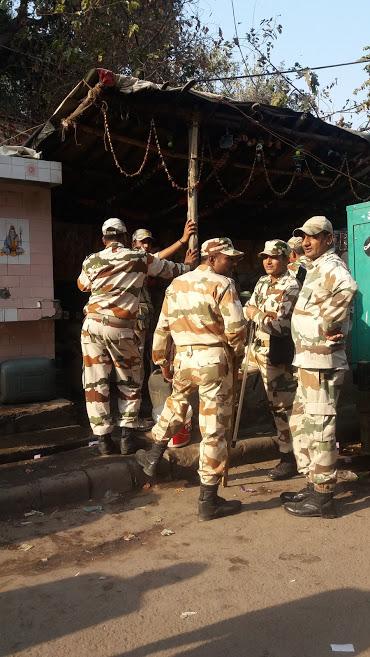 (The whole colony surrounded by CRPF) 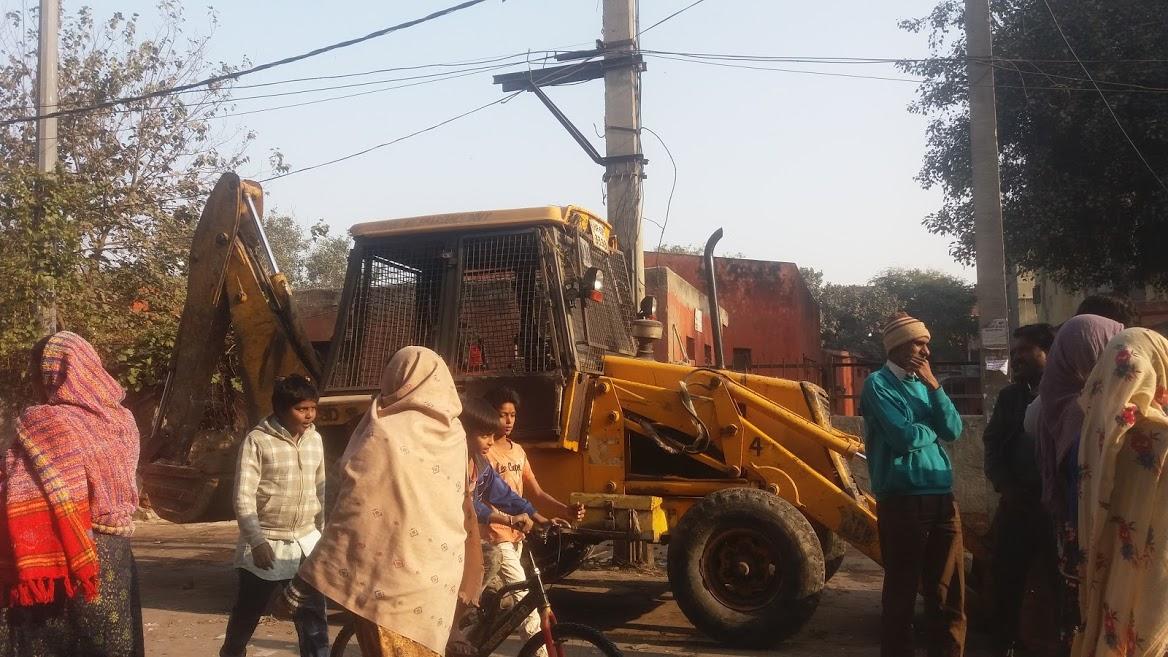 “The police are here with a proper arrangement to facilitate people to move to newer locations peacefully, we must always go prepared for a war,” he commented. 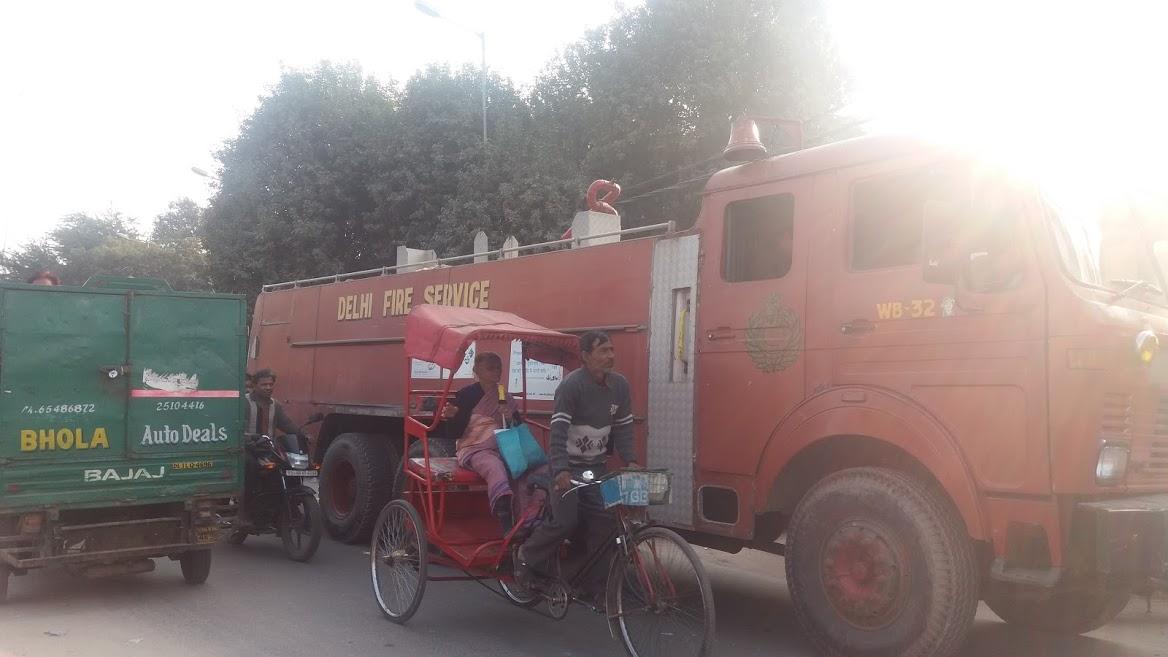 While returning from the camps where one could get slips for their transit homes, we meet Taruna with her husband. They are here to get themselves registered. She smiles, “we have all the required documents, now we are moving away from this hell.”