FIR Against 17 JNU Students, No Action on Demands

NEW DELHI: The Dean of Students (DOS) JNU has lodged an FIR against 17 students of the university, including the four office bearers of the Jawaharlal Nehru Students' Union (JNUSU). Copies of the FIR are as follows: 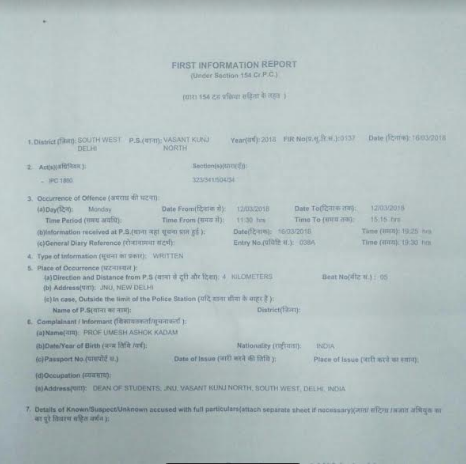 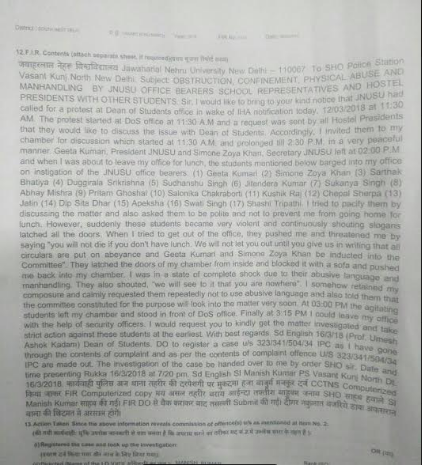 Additionally, senior Professors of Jawaharlal Nehru University-- have come together to support the ongoing struggle of the students and faculty of the university against the arbitrary actions by the Vice Chancellor.

In a statement Romila Thapar, Prabhat Patnaik, Mrdula Mukerjee, Utsa Patnaik and others have urged the Visitor of the University who is the President of India to intervene before the institution is destroyed by the current actions and behaviour of the Vice Chancellor.

We the undersigned former teachers of JNU are dismayed by the turn of events in the university since the present vice-chancellor has assumed office. The strength of JNU since its inception had been its democratic ethos marked by mutual respect, and cooperation between its three main constituents, the students, the faculty and the administration; the frictions that arose occasionally were settled through collective intervention within this democratic ethos. The present vice-chancellor however has been seeking to replace this ethos by one where unilateral decisions taken by him are to be obeyed by others.

The superseding of senior professors in the appointment of Deans and Chairpersons of Schools; the introduction of compulsory attendance without proper discussion at the various academic bodies; the wholesale sacking of Deans and Chairpersons who incur his displeasure simply for upholding the established norms and practices of the University; the replacement of GSCASH by a committee filled with nominees of the administration; the reduction in student intake and blatant violation of laws on reservation for deprived sections; the rampant interference in the selection of new faculty; the arbitrary and irrational rules regarding viva voce examinations for MPhil and PhD candidates that are preventing such students from being examined for the award of their degrees; the victimization of student representatives; and the dismissing of massive protests by teachers and students as the mere handiwork of a handful of persons, are all symptoms of this effort to negate the democratic ethos of the university.

We support the current struggle of the teachers and students to maintain the democratic ethos of JNU which has made it such an outstanding institution, and urge the Visitor of the university, the President of India, to prevent the Vice-Chancellor from following a course which will only destroy this institution.