'I Saw the Road Crack Open, and I Clung to a Tree, Desperate to Save My Life'

After the tsunami in Andamans

“When the tsunami struck, I saw the road crack open, and I clung to a tree, desperate to save my life,” recalled Tapan Mondal, a farmer from Andaman Islands. Mondal from Chouldhari panchayat in south Andaman grew paddy and pulses until tsunami devastated his land in December 2004. “After the disaster, everything was destroyed. Nothing grew in my land.”

The case was no different for Sudhir Datta, another farmer, whose land was just 10 m from the sea. He lost his entire paddy crop. His land remained fallow for almost six years.

“Farmers were unable to cultivate crops due to high salinity. After heavy rainfall, salinity decreased by the day. The next year, they tried growing crops, but there was no fruiting,” Tapan Biswas from Central Island Agricultural Research Institute (CIARI) said.

Scientists from CIARI and the island administration worked with the farmers and devised solutions, taking unpredictable weather conditions and constraints on land availability into consideration. The climate-sensitive solutions have improved revenue for the farmers.

“We build machans to protect okra and beans; however, due to severe wind, the machans broke and there was nothing we could do,” Datta said. “Early weather warning is not of much help. Can we stop the water from entering the land or the wind from blowing? We can do nothing about natural calamities. Sometimes, we just use nets and save our crop at the last moment.”

On another heavy rainy day, Datta had to relocate his hens. “I had to keep the hens on top of one another. During heavy rain, the fishes from the pond slip away too,” he said.

In Andaman, after the tsunami, salinity and waterlogging emerged as serious issues. “Though the region receives 3,000 mm of rainfall annually, between January and April, we have water shortage. As the islands are close to the equator, there is high evaporation,” said A. Velmurugan, senior scientist at CIARI. 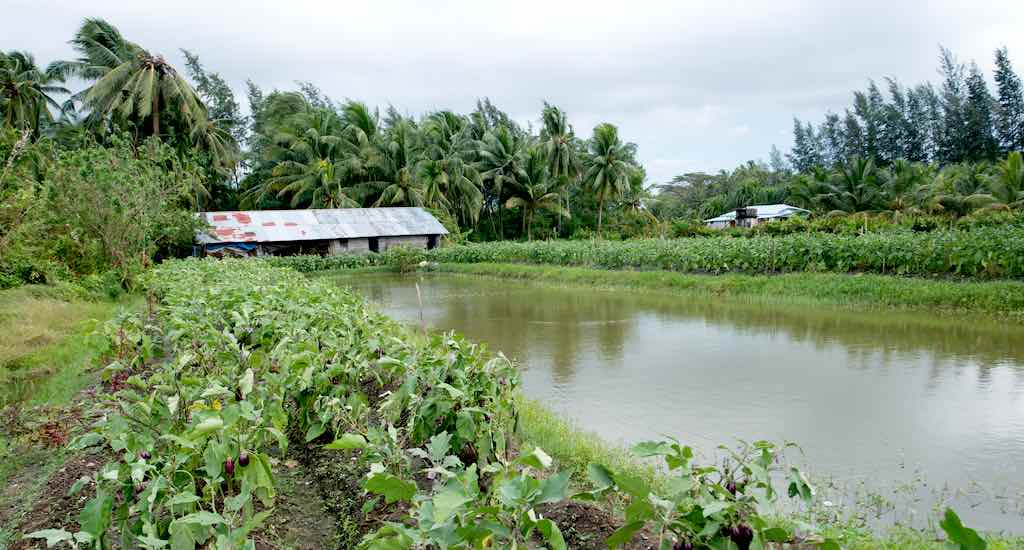 Land shaping helps farmers grow vegetable crops on the bunds and store rainwater in the ponds, which is used for irrigation and to grow fishes.

Land availability in Andaman is limited to 50,000 hectares. Most lands are forested areas, and hence farming solutions had to be devised in such a way that production is maximized within this restricted land space. Post tsunami, scientists from CIARI worked with farmers on devising solutions that suited the weather and climate of Andaman Islands.

Over years of demonstration and implementation, land shaping, a method to practice agriculture in controlled conditions was standardized for farmers. Land shaping protected natural resources like land and water, and also addressed the socio-economic conditions of farmers.

Some of the land shaping methods for different farming situations in the islands are broad bed and furrow system, paired bed system and pond with broader dykes. After testing soil for salinity, CIARI gave customized land shaping solutions to the farmers.

There was also a need to plan an annual agricultural cycle due to weather conditions. “What should be grown during a month, how this has to be matched with climate and weather, water and land availability of farmers and their crop preference are some of the factors to be considered. This is an agro-ecological approach,” Velmurugan said.

In the broad bed and furrow system of land shaping, vegetables are grown on a raised bund. This prevents water from entering the farmland. Also, farm ponds were built to store rainwater for the farmers’ agricultural needs in summer. Velmurugan said, “When the bund is raised to 1m, even if water enters to about 60cm (2 feet), the land is safe.”

Both Datta and Mondal implemented the broad bed and furrow system, and built farm ponds in their lands to store rainwater. “In 2015, government officials made three beds in the farm, and after six months, I harvested plenty of brinjal. I also raised fish, and earned between Rs 70,000 and 1,00,000 a year. My profit was Rs 2 lakh per annum,” Mondal told VillageSquare.in.

Datta said, “A pond was made by removing soil and a wall was created from the excavated soil. This helped me grow vegetables. This is more profitable than paddy. I had a single harvest of 300 kg and sold one kilo for Rs 80 recently.” 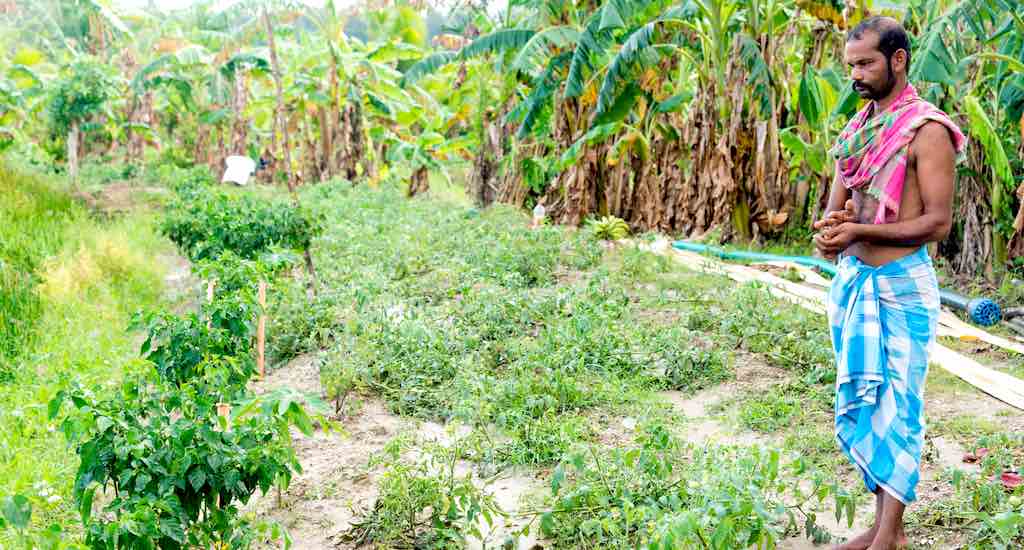 “There is plenty of water. Even in summer,” said Mondal. Water is used not just for agriculture, but also for fish culture. By diversifying agriculture, there is higher sustainability for farmers. “If the farmer is intelligent, he can grow three crops a year,” said Velmurugan.

Farmers also had their own solutions to reduce the impact of cyclone. At Datta’s farm, a laborer was busy fixing loose soil with his feet. “After cyclone, the soil becomes loose and plants would not stay firm. We press the loose soil to ensure they remain intact. This is one of the measures to save our crop,” said Datta.

“To reduce salinity in the soil, farmers spread sea shells in the soil. This is something unique that is done here,” Biswas said.

After cyclones, government reaches out to farmers for financial aid; but it seldom reaches the farmers. The farmers said that that if government wanted to help them, they should approach the farmers directly instead of routing the money through zilla parishad, panchayat or agriculture department.

Datta said, “During cyclone, 40% of brinjals were lost. If there are crop losses, let the government give us the money directly. The middlemen take commission. They give us Rs 500, get our signatures, and then add a ‘zero’ later, to the amount. Let the money come into the farmer’s account – to the one who owns the land.”

Vegetables are expensive in Andaman Islands as there is port duty. “If the vegetables are produced locally, in an environmentally safe way, farmers can earn Rs 3 lakh per annum in Andaman’s conditions,” said Velmurugan.

“Building farm ponds is one of the very good methods to give irrigation facilities to farmers as there are no check dams or bigger streams. This is the only way to utilize rain water. As we have standardized the method, if the government funds farmers to build them, it will be greatly beneficial. There will be less dependency on Chennai market, and significant reduction in transport cost as well,” he said.

Sharada Balasubramanian is a Coimbatore-based journalist. All photographs have been taken by her. Village Square