Displacement from the core forest area, migration to cities in search of livelihood, man-animal conflicts, frequent droughts and poor health standards are known deficits of this region. Now the Adivasi community of Panna Tiger Reserve is facing the adverse impact of the countrywide lockdown.

Project Koshika is an initiative in 10 tribal villages of Panna Tiger Reserve, to reduce the high infant and maternal mortality, and malnutrition rates, one of the highest in the country. 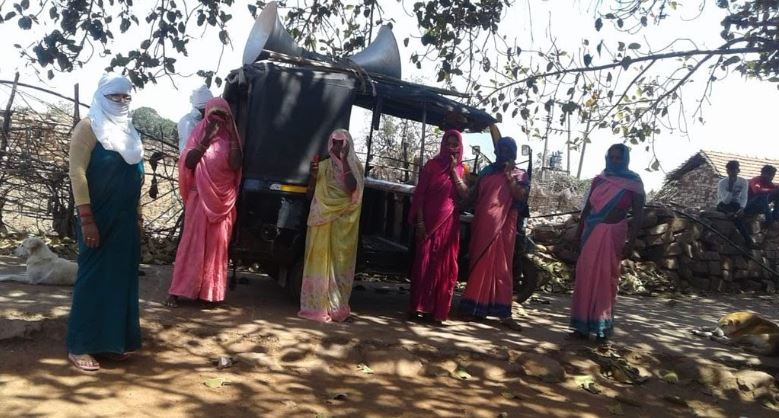 Project Koshika is led by alumni of India Fellow, a social leadership program. The team is directly working with the community with a bottom-up approach. They have been trying to solve the immediate needs of the community, in addition to addressing maternal and child health issues.

Announcement made on March 24 regarding nationwide lockdown to contain the spread of coronavirus did not reach the community. Villagers had no clue about coronavirus and COVID-19; because without electricity and other communication channels, they did not have access to authentic information.

Villages, especially the remote forest villages that are about 45 km from Panna, did not hear about the lockdown. They learnt about it only when policemen at checkpoints asked them to return, when they went to buy provisions at the weekly market.

Har Bai of Kudan village, a health facilitator for Project Koshika, called the team, asking what disease it was and if she could go to her farm to work. “How long will it take for the disease to stop? People here are telling me that the prime minister has told us not to step out of the house,” she said.

Koshika team started getting similar calls. The community resides deep inside the jungle with very less connectivity to the outside world. News usually spreads by word of mouth. People were confused and began making assumptions.

Team Koshika felt the need to spread awareness regarding the coronavirus outbreak and its symptoms. Using audio notes, the team decided to disseminate information and stop spread of misconceptions about the disease.

On March 29, during the lockdown, Koshika team received a call from Katahri-Bilhata village situated in the core area of the tiger reserve. A 7-year-old girl had fractured her hand and she had been suffering for an entire day. The swelling in her hand kept increasing and the child was in incredible pain. 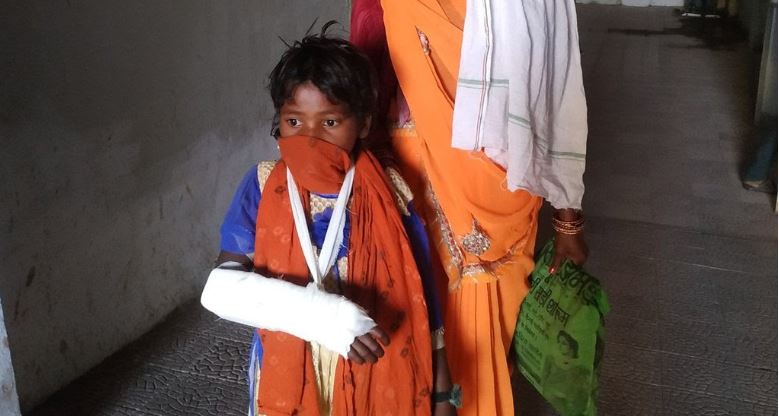 Kalpana, a seven-year-old from a forest village, could get treatment only after several hours because of the lockdown (Photo by Saurav Verma)

The widowed mother requested a villager to take them by motorcycle to the district hospital in Panna, around 50 km away. The police at the nearest checkpoint stopped them. The police were allowing only government vehicles and ambulances. When they took a different route, police stopped them again.

Amanganj, about 20 km from these forest villages is where the weekly bazaar is held, and the nearest community health center is. As the market in Amanganj is closed, people have been unable to sell the produce from their farm.

“People don’t have any cash left with them now. They are buying essentials in exchange of grains and pulses,” said Kali. Kali, who owns a shop in Katahari-Bilhata, was apprehensive that the stock in her shop would also exhaust, and that people would have no options.

With no cash in hand, they are unable to buy oil, spices and medicines or travel to the mandi to sell their produce. Kamla, a health facilitator of Khamri, a village in the buffer region, said that the local shop in her village was out of oil stock and that people were cooking without oil.

The shops in the villages usually stock up on their commodities for a week. With the profit they earn in a week they buy stock for the next week. Now this routine has been disrupted because of lack of cash.

As women are no longer able to sell firewood, they are left with no money to buy essentials (File photo by Saurav Verma)

Buddha Singh and five of his friends from Khamri village, all teens, are stuck in Punjab. Thanks to several organizations helping migrants in this crisis situation, they have also received help. They are getting food supplies from NGOs working there, but not everyone is lucky.

Kailash (22) and three residents of Katahari villages found out that rail services had been cancelled, when they planned to return home. They are in Jammu, surviving with the money they earned before the lockdown.

Kailash hasn’t seen his newborn girl Krishna yet. “I have exhausted all the money as our work has been stopped and it is difficult to manage,” he said. Team Koshika extended help to his family in Katahari through India Fellow’s COVID-19 cash relief initiative.

Buddha Singh (18) of Bara Kadraika village had walked from Delhi to Panna. “I am at the district border but my parents and some friends are stuck midway. We got separated in Agra, and the police have stopped them,” he said. “If they walk, it will take them another six days. We don’t want food, but how will they walk all the way.”

His family was stranded in District Saiyan, which is at the border of Uttar Pradesh and Madhya Pradesh, where they had to spend many hours before a bus was arranged for them. “We think the bus will take us to Jhansi, but don’t know the plans after that,” said Buddha Singh’s father over phone.

As men migrate to cities and work on farms, women in the Adivasi community earn Rs 100 to 250 by selling firewood in the nearest market in Amanganj. It is sufficient for them to buy essentials for a week. Now that the market is closed their only source of daily cash has stopped.

A call from health facilitator Rajni, was a grim reminder of what was in store for many of the villages. “Half of the families in my village Majholi here have started facing financial crunch; they are eating roti and salt,” she said.

It was only the second week of the lockdown, and the scenario would get worse. The community already has its set of difficulties: lack of jobs, poor accessibility and the ever-present danger of wild animals destroying their crop. They face water shortages through the summer, and the farm yields are erratic.

While the country slowly comes to terms and gears up to handle the losses sustained, marginalized communities like the tribes living in the forests of Panna suffer from layers of additional challenges, from lack of clarity about the pandemic, delays in treatment for everyday health issues, loss of livelihood and shortage of cash to buy essentials.

Their struggle would increase during this lockdown period, with little clarity on when this disruption would return to normalcy for them. It is possible that with the help of consistent government relief and help from local NGOs, this process will take less time than it would otherwise.

But one needs to keep in mind that these challenges will be beyond just basic relief, and there will be a need to restore channels of livelihood for these families in due time. Till then the people can only wait, amidst mounting distress, for the lockdown to end, so that they can go back to their tough lives.

Photographs Saurva Verma. Cover Photograph of a local market (file) where now tribals do not have the money to buy provisions.