GUWAHATI: Devastating floods have once again wreaked havoc in Assam, claiming at least 88 lives since May this year. At present more than 24 lakh people have been affected by the floods across the state in 25 districts.

Amid the COVID-19 pandemic, the floods have compounded worries for the people in the state.

A tiger struggling to wade through the flood water inside Kaziranga National Park. (KNP Official)

“The flood water is receding now. But it will increase further if it rains again. The government agencies like NDRF and SDRF besides the local administration and people are helping in the rescue and relief works,” said an official of the Assam State Disaster Management Authority (ASDMA).

More than 44,000 people are still staying at the relief camps set up by the government, and many others are taking shelter on roads and higher places on their own.

ASDMA report on Wednesday morning said that 109358.67 hectares of agricultural land has also been affected by the floods. The main river of the state Brahmaputra and many of its tributaries are still flowing above the danger level.

At least 58 people have died since July 1.

“We have been staying on the road for the last two weeks. We lost two cattle in the flood. However, we could rescue one cow. Things are getting difficult here,” said Taslima Khatun, 40, a housewife from Goroimari, in Assam’s Kamrup district.

Khatun and her family members along with their neighbours have made an embankment their home with tarpaulin sheets for the last two weeks.

“We are getting food stuff and other essentials from the government and some NGOs. Drinking water has been a problem for us and also for the animals. We are not getting fodder for the cow,” she said. 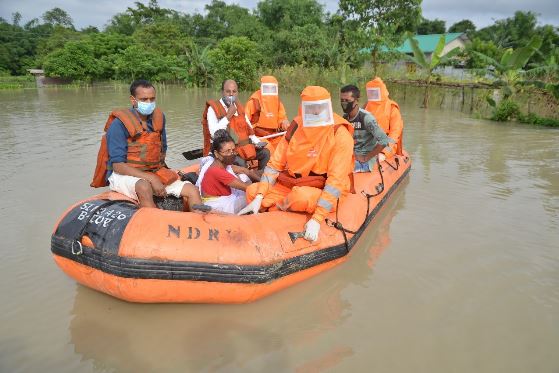 Amid the COVID-19 crisis, this has become a worst-case scenario for the people. “How can we maintain social distancing? Even maintaining basic hygiene is so difficult here in the relief camps. The situation is grim here,” said Ankita Pathak, an inmate of a relief camp in Nagaon, in Assam.

The flooding has also affected the animals of Kaziranga National Park (KNP). In the last couple of months, 120 animals have died in the park. Though, the flood water has receded inside the park as of on Wednesday, it inundated almost 95 percent of the 430 sq km area of the park last week.

Sixteen hog deer died after being hit by speeding vehicles on the national highway 37 which runs through the park. Animals cross the road to travel to safer and higher places during the flooding season which cause such accidents.

Sivakumar said that they have also rescued 124 animals from the flood and provided treatment.

Apart from that, more than 25 people have been killed in landslides that were triggered due to incessant rains in the last couple of months in the state.

The COVID-19 scenario is also not improving in the state with the total positive cases amounting 26,772. So far, 64 deaths have occurred from COVID-19 in the state.