Agriculture-based elephant deterrents are best for ensuring the survival of elephants and humans.

Colombo, March 28: Sri Lanka has the highest casualty rate in the human-elephant conflict in the world according to Dr. Sumith Pilapitiya, former Director General of the Sri Lankan Wildlife Department. 2019 was a particularly bad year, as 407 elephants had been killed. On an average, 85% of elephant deaths have been due to clashes with humans.

Humans too have been paying a high price in this war between man and an animal. The average human death rate due to the human-elephant conflict was 71 between 2005 and 2010, and 54 between 1992 and 2001. The human death rate had increased by about 14% from the previous decade and by about 50% in comparison to the past two decades. The number of human deaths in this connection had spiked to 112 in 2020, a sharp increase

However, despite the slaughter, Sri Lanka still has around 7500 elephants according to the BBC. Elephant density is the highest in Sri Lanka. But about 70% of the elephants live outside the officially Protected Areas (PAs), and thus are a source of conflict with humans.

Interestingly, in India, more humans and less elephants die in such conflicts. The annual human death number in India is 400 as against 100 elephant deaths.

The human-elephant conflict is a modern phenomenon owning its existence to man’s increasing developmental needs and the expansion of the human population due to improved health and living conditions of people. Pushed by sheer need, if not for greed, man has been forcibly intruding into places where elephants once roamed and foraged freely.

Earlier in the pre-industrial development era, people and elephants lived in peace and harmony. Elephants were not killed. They were, of course, captured and traded for use as draught animals, in war as mounts for commanders, and as attractions in temple and royal festivals. In the Indic cultures (ie: in India, Nepal and Sri Lanka) and much of South East Asia, elephants were objects of veneration. Indian records show that domestication of elephants dates back to 4,500 BCE. Hannibal, the great Carthaginian General, had crossed the Alps in 218 BCE using elephants as transport.

However, ivory hunting in Africa and expansion of populations in Asia, virtually ended domestication of elephants. Elimination of elephants began either for profit or to acquire and protect property in their natural habitat. In Sri Lanka, the opening up for new lands for cultivation by post-independence governments led to human-elephant conflicts, which in turn, led to mounting deaths on both sides of the e man-elephant divide.

In August 2020, Sri Lankan President Gotabaya Rajapaksa told Wildlife Department officials that 122 human lives were lost and 407 elephants were killed due to the intrusion of elephants into villages in 2019. He pointed out that it was the responsibility of the Department of Wildlife to feed wild animals which live in 1.2 million hectares under the department’s control. He gave officials two years’ time to end the human-elephant conflict, pointing out that the problem has persisted despite talking about it incessantly for 40 years.

Elephant conservationists could not agree more. Their grievance is that their blueprint for conservation and harmonious human-elephant relations, submitted to the government in December 2020, is gathering dust in a shelf. They feel that a solution is possible because it has been found that elephants in Sri Lanka do not migrate long distances but live in around 20,000 hectares.

Writing in Frontiers in Ecology and Evolution, Matt W.Hayward of the University of Newcastle, Australia, says that elephants consume up to 150 kg of forage and 190 litres of water daily. Meeting these basic needs requires a large foraging area to provide a variety of grasses, shrubs, tree leaves, roots, and fruits. A typical family of elephants (5–20) has a home range size of 100 to 1,000 sq. km.

Hayward says that left to themselves, elephants enrich the environment by dispersing seeds over a wide area. There is therefore a requirement to maintain a healthy population of elephants, he argues.

Establishing ecological corridors is one way of approaching the human –elephant conflict. But development and infrastructure expansion in or surrounding elephant habitats are generally executed without concern for their ecological impact. This results in conflicts.

Physical exclusion methods such as electric fences and trenches are commonly used to deter elephants from entering farmland and human settlements. But the cost of construction of these hurdles and their long-term maintenance is heavy. Interestingly, studies in Africa show that once elephants learn that their tusks do not conduct electricity, they use their tusks to break an enclosing electric fence! Physical barriers also negatively affect movement necessary for the elephants’ survival .

Making noises to frighten the elephant is another technique which is adopted. But some studies show that elephants quickly learn to tolerate these sounds and raid farms. Maintaining sound systems also present logistical challenges in remote areas, although the method is 65 to 100% effective. Recent studies in Africa show promising results for bio-acoustic methods such as using beehive fences to deter elephants. Bee keeping is also an income generator for farmers.

Early warning systems including placement of detectors are also used. But these require internet connectivity or network coverage to transfer alerts to farmers, which limits the practicality of infrasonic receivers in remote areas. Scientists can also put a radio collar on an elephant and trace its movements to warn farmers.

Removal or relocation of elephants is another method used to keep their movements in check. But elephants have a way of coming back to their homes – their original habitat, reports Malaka Rodrigo in the website www.mongabay.com. He reports that an elephant named “Homey”, which was GPS collard in 2006, walked back home from Yala National Park’s Block II were it was relocated. It was then relocated in Udawalawe, but came back. It was then dispatched to Maduru Oya. It tried to come back from there too, but was shot dead on the way. Elephants detest relocation.

Agricultural Deterrents are the best

Agriculture-based deterrents are perhaps the best. Chili-grease covered fences have proved to be effective to an extent. But this technique is expensive. Another agriculture-based deterrent involves interspersing commonly raided crops with crops that are less attractive or palatable to elephants. In addition to serving as repellents, these alternative crops, such as chamomile, coriander, mint, ginger, onion, garlic, lemongrass, and orange, can economically benefit farmers.

The Sri Lanka Wildlife Conservation Society (SLWCS) has Project Orange Elephant which has proved its worth. Elephants do not like citrus fruits of any kind. They will not approach a home or garden, no matter how food-filled it is, if it means passing through a row of citrus trees. So the Project Orange Elephant’s goal is to get as many local farmers as possible to plant orange trees around their home gardens to create a soft buffer and deter invading elephants. According to www.treehugger.com since its inception in 2006, 17,500 orange trees have been planted and the goal is to reach 50,000 by 2025.

In Hambantota district, the project uses a variety of grafted local orange (Citrus sinensis) known as Bibile Sweet that had been developed in Sri Lanka to suit local climatic conditions. This variety grows well in marginalized land and does not need frequent irrigation. It bears fruit within 1.5 to 3 years. Each tree can provide from 300 to 600 fruits per season. Each tree has a fruiting cycle of two seasons per year. Bibile Sweet is a high-quality fruit known for its fresh sweetness, value-added products, and has good market demand. By planting these trees alongside their crops, particularly in the border areas adjacent to elephant habitats, crop raiding by elephants can be reduced, while also supplementing farmers’ income.

“Saving Elephants by Helping People” is the underlying philosophy as well the objective of the Sri Lanka Wildlife Conservation Society’s efforts to develop holistic and sustainable measures to mitigate the human–elephant conflict in Sri Lanka. 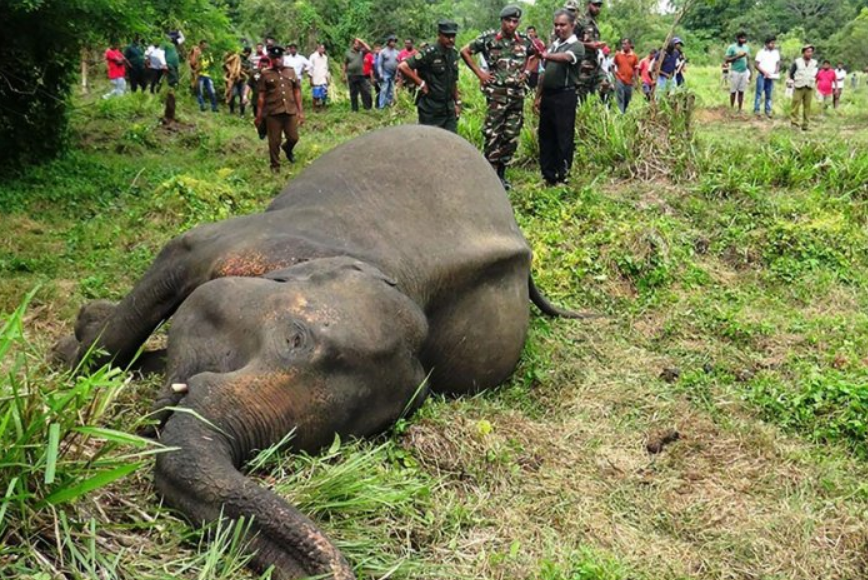