ITANAGAR: Two days after a forest fire in Mizoram’s Lunglei town began, authorities were able to bring much of the raging flames under control but it continues to burn in other parts of the state.

Residents of the town woke up to scenes of a raging fire in the surrounding hills. The fire reportedly started at around 7 am on Saturday.

Lunglei district’s deputy commissioner Kulothungan Ashokan informed The Citizen that around 95 to 98 percent of the fire had been contained by Monday afternoon.

Those in Mizoram, including the deputy commissioner, said that forest fires in the state are commonplace.

One resident of the capital, Aizawl, said that this particular fire received a lot of attention due to a combination of the fact that it happened near an urban centre and that visuals on social media began showing up.

In fact, Mizoram chief minister Zoramthanga had been sharing constant updates on the situation in his state, posting pictures of the extent of damages.

Following the chief minister’s request, the Indian Air Force sent in two Mi-17V5 helicopters on Sunday to help put out the flames.

Government fire-fighters, personnel of the Assam Rifles, Border Security Force and local volunteer groups have also been helping push back the fires.

Ashokan said that the local volunteers are well-versed with fighting forest fires since they happen so often.

He also informed that satellite from the Forest Survey of India showed that the fires had spread to around 200 acres in the district.

A combination of the dry weather and vegetation meant that the fire spread quickly and even after initially gaining control, it surged again on Sunday.

However, by Monday afternoon, much of the fire in Lunglei district had been brought under control.

While the fire in Lunglei has ceded, it continues to rage on in other districts.

Sources informed that the fires continue to rage on in the districts of Khawzawl, Champhai, Serchhip, Aizawl, Hnahthial, and Lawngtlai.

Unlike in Lunglei, the fires in the other districts have damaged some homes and livestock, although no casualties have been reported yet from anywhere in the district.

In Lawngtlai district, 12 houses were completely destroyed and two were partially damaged.

Marilyn Rualzakhumthangi, the additional district commissioner of Lawngtlai district, had earlier said that livestock had perished and that the district administration dispatched officials and relief materials.

She informed that the safety of vegetation and habitation around the Phawngpui National Park had become a huge concern by Monday morning.

Phawngpui, often called the Blue Mountain, is the highest mountain peak in the state.

“The state government has acted swiftly and requested for and received additional air support to douse the wildfire from the Ministry of Defence,” she said.

The new aircrafts already in Mizoram will tend to these areas in Sangau subdivision of Lawngtlai district today.

While the authorities have been able to avoid casualties, the fires rage on.

By around 7.20 pm on Monday evening, a fresh wildfire had begun at the village of Lungzarhtum under the Sangau civil subdivision.

With the authorities and volunteers continuing to fight the fires, its cause remains unknown though some have speculated that the jhum or slash-and-burn method of farming used in many parts of Mizoram and some states in the Northeast may have led to it. 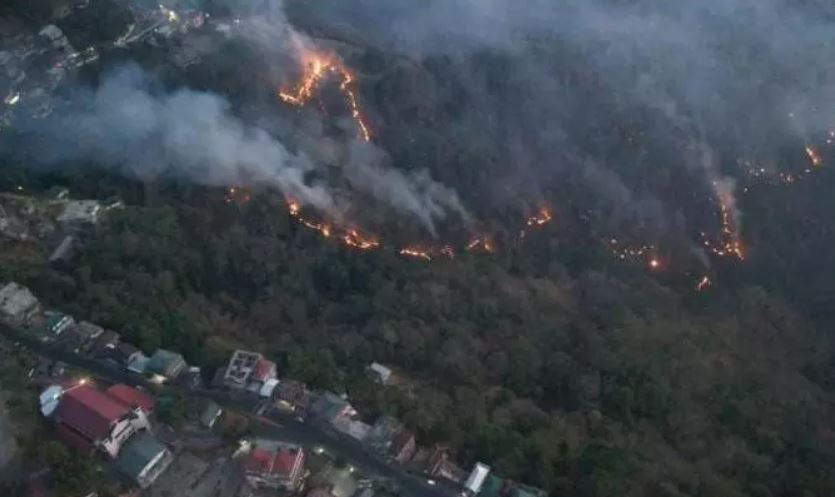