The sea has eaten into the once wide beach, the waves flood the houses in monsoon.

The sight on the beach at Poonthura, nine kilometres away from Thiruvananthapuram Central in Kerala, was ravishing. As they hurled their fishing nets, about 20 fishermen sang an elegy to the ground beneath their feet, that was slowly being stolen by the sea.

As they stood on the now 20-metre-wide beach, which was one km wide, 15 years back, they sang a folk song praising the sea mother and a chant to confound the fish they caught in the nets.

“Three years ago, my son ventured into the sea like any other day, but he never came back,” sobbed Adalette Alcose, gazing at the Arabian sea.

On a breezy day, as the waves came crashing in, the 75-years-old recounted the tragedy that occurred three years ago, in December, that left their coastal village bereft of countless fishermen; many dead, many missing.

In the coastal town, countless people have similar stories. There are almost 40 fishermen from this coastal village still missing after the Ockhi cyclone that struck the coast in December 2017.

The ramifications Ockhi brought with it did not stop with the casualties. The cyclone has furthered sea erosion in the region.

The sea has eaten into the once wide beach, the waves flood the houses when the monsoon arrives.

“At the year-end, people make offerings in church for the dead people. Some women do not offer prayers for their missing family members with the hope that they might be stranded on some islands and will return someday,” said Herman Eldaphonse, a youth who had lost his uncle to the disaster.

Poonthura has been facing neglect for a long time and it is one among a multitude of such towns in Kerala embroiled in these issues.

The same stories resonate in Poonthura, Chellanam, Ponnani, other fisherfolk towns in the state.

The locals were given lofty promises by politicians from the two main parties, the Left Democratic Front (LDF) and the United Democratic Front (UDF), for mitigating sea erosion and incursion. But nothing has come to fruition, said the locals.

Bosco, a fisherman lamented about living in a constant state of fear for the loss of life and livelihood.

“There were measures like planting mangrove forests, building groynes, sea walls and geo-tubes to overcome sea erosion, but not even one of these were implemented. As the sea comes nearer to our homes, we have nowhere to go,” he said.

The locals had asked for a mini harbour in the town for the past decade to reduce the force of the sea waves crashing in but to no avail. “All these years, we have faced nothing but neglect. If the fishermen lose their livelihood and this town, will people notice our wails?”

Vizhinjam harbour has made the perils of sea incursion more prominent. “The water displaced after the harbour was set up is inundating our region,” said Herman Eldaphonse.

With time, the sea has inched closer to the shore and has eroded the sea wall. The government has asked the locals to move to a different place, promising a sum of Rs 10 lakhs under the fisheries department’s Punargeham scheme.

Benjamin, living in a house in an area of three cents, with his yard, full of equipment for his boat, said, “I have worked so hard and now my three children are well educated, one of them will go to Canada for higher studies in a month or two. All this was possible with my income from fishing. What will Rs10 lakhs fetch me? How will I earn if I’m to desert the sea?” he said.

The houses nearest to the sea are under the 50-metre distance and they are flooded during high tide.

“The beach was wide enough for 100 fishermen to sell together with their catch 15 years ago, now the width has dwindled,” said Peraprais, a 55-year-old fisherman.

The rehabilitation scheme for those affected by sea incursion is not welcomed by the locals. “The Rs 10 lakh provided by the government for rehabilitation is too less an amount. The sea is the life and livelihood for everyone here, who would leave it?” he said. 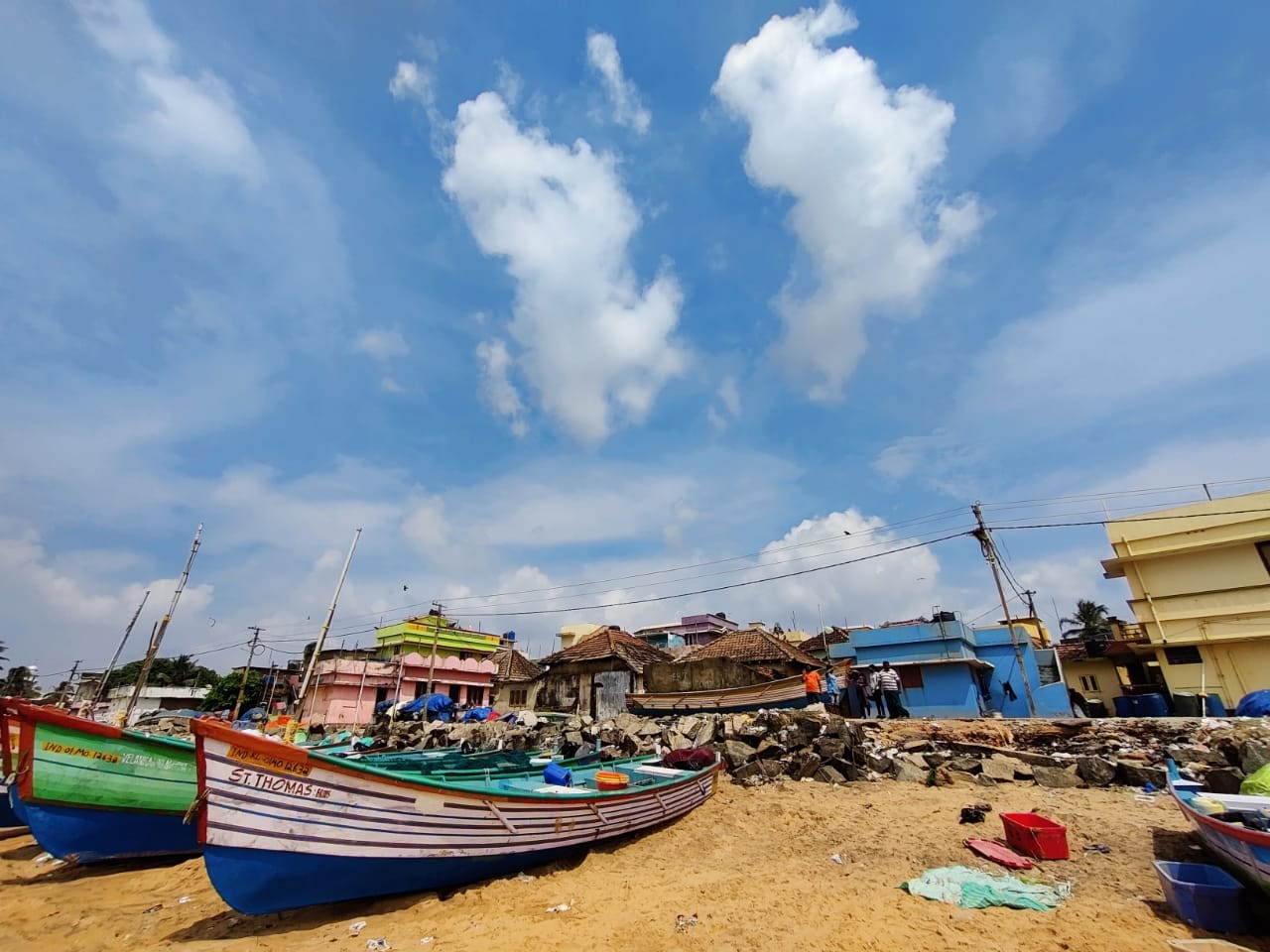 Adequate measures like groynes for curbing the frequency and intensity of sea incursion and geo-tubes for combating erosion have not been built in Poonthura. The demands were made since the coast was hit by cyclone Ockhi as the cyclone had aggravated sea incursion apart from the material damage and casualties.

John Mathews, a fisherman and politician, who was a part of rescue operations during Kerala floods said, “Despite confronting neglect in the face of disasters, we don’t turn our backs on people who need help.”

Mathews along with 7 others from the town travelled to Pathanamthitta district in the state after floods wreaked severe damage and casualties in the district.

“We went to Pathanamthitta in 2018, but it was not with the hope that the favour will be returned. The collectorate had offered us Rs. 3000 for it, but most of us did not take it. The engines of our boats were damaged after that, but we did not seek any compensation,” he said.

Despite all the maladies striking them, people in Poonthura made news, not as the neglected lot, but as the lot creating a ruckus.

The town bears little resemblance to the “misbehaving lot” picture, portrayed by the media.

When the pandemic struck, the first case of community outbreak was reported here. Lockdown followed, 25 military personnel were deployed and the movement of the locals was closely monitored.

“The mayhem in this town was extensively covered by the media. The locals were seen coughing at the healthcare workers who came to collect samples and assembled with no regard to physical distancing,” said Herman.

“However, our hardships due to sea incursion and sea erosion seldom make the news,” he said.

Herman recollected an incident when his friends were taken into custody by police and were harassed after they told them they were natives of Poonthura.

“Life is hard for us, especially after the pandemic. We are seen as the carriers of the disease, even though we fare better than other places in the district,” Herman said.

As natural calamities and constant bouts of classism strike the town, everyone turns a deaf ear at the stigma and sufferings borne by the locals. 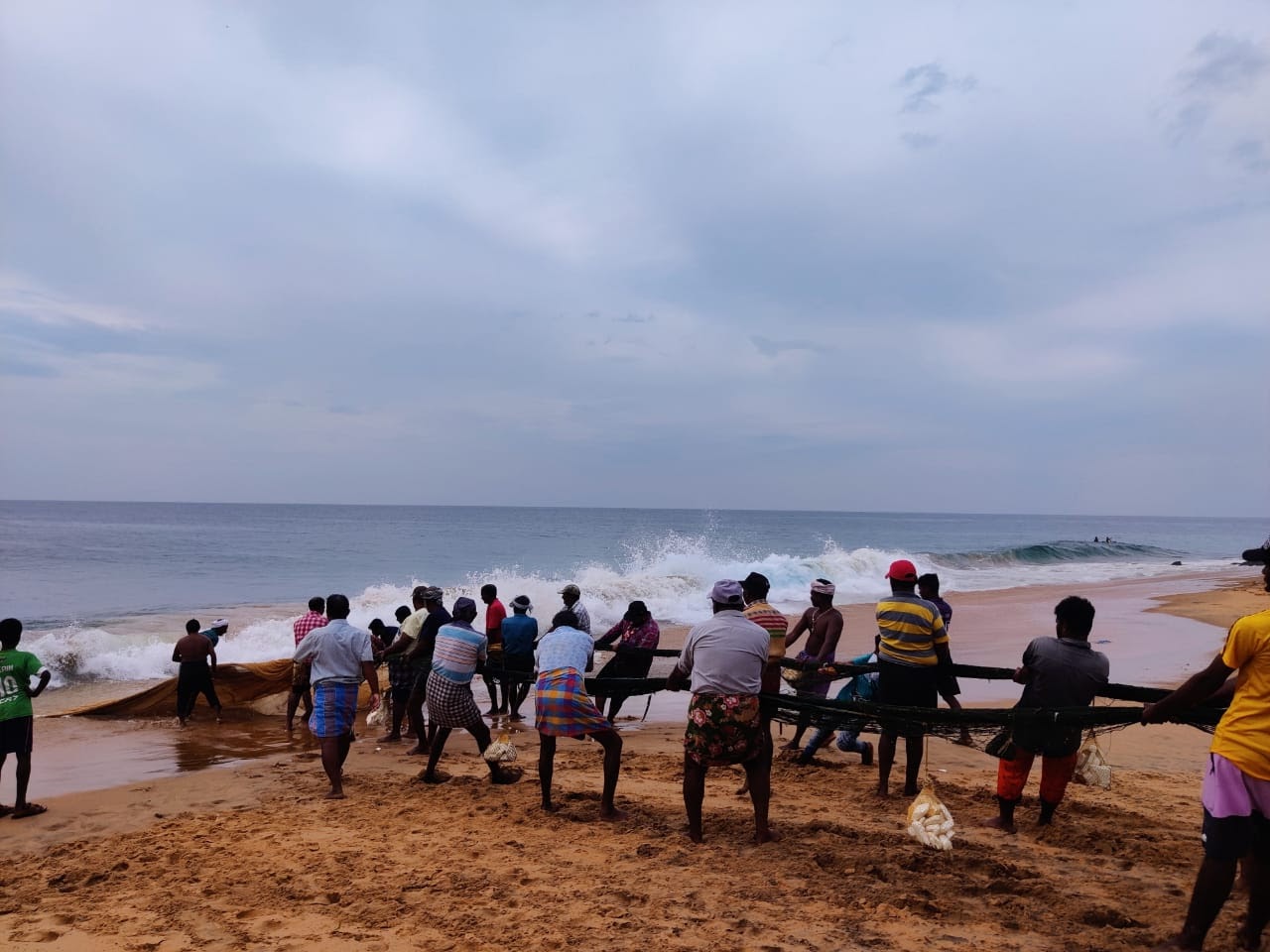