Tragic Deaths of Hundreds of Parrots Point to Wider Threat

Remedial action must not be confined to Faridkot

The National Green Tribunal has very recently given orders to the chief wildlife warden of Punjab and other related authorities to investigate the sudden mass death of about 400 parrots in Faridkot town of Punjab and take appropriate remedial action.

This mass death of parrots is not a one-time event. Bird lovers and lawyers associated with them in Faridkot have been drawing attention to the phenomenon for a few years. What their continuous vigil reveals is that these deaths are reported almost entirely from or near jamun and other fruit trees, and generally peak before the fruit plucking time.

Many of these trees are auctioned to contractors who spray toxic chemicals on trees. Sometimes bird deaths have been seen very shortly after this. Hundreds of birds in large numbers have been dying every year. These include a lot of parrots but in addition a significant number of other birds including pigeons, sparrows, etc.

When bird lovers draw government attention to these it generally attributes them to sandstorms or other natural factors and hence no action is taken. One hopes that with court orders this time a proper investigation will be made in Faridkot.

What about the wider reality? After all such conditions of fruit trees being given to contractors and sprayed indiscriminately exists in so many parts of the country. In Faridkot because of the continuing vigilance maintained by bird lovers, and the help extended to them by some lawyers, the death of birds has been reported. In other parts it may not be even noticed and the dead bodies of small birds just disposed of casually.

Hence it is very important that the investigation not be confined to just a small town like Faridkot, but instead be taken up in a much larger context.

Already there have been disturbing reports from other parts of the country. In Kashmir the use of pesticides in apple orchards is reported to have caused a big reduction in bees, wasps and other pollinators. Now while the death of a large number of birds at least gets noticed, the perishing of a large number of bees and other pollinating insects may not gain our attention. But it will certainly lead to a big loss of pollination, well known to be crucial to agricultural processes.

The use of pesticides has increased worldwide since the promotion of monocultures, given their higher susceptibility to pests and diseases, as opposed to the healthy growth of diverse varieties and plants. The indiscriminate use of pesticides in orchards has been causing many other problems, including an adverse affect on the safety and nutritive worth of fruits and fodder obtained from orchards.

Similar problems exist in other orchard areas. From Himachal there have been reports of some unauthorized sprays being used. In other areas hazardous chemicals are used just to improve the look of fruits.

Similarly from the orange orchards of Nagpur and neighbouring areas there have been reports of unauthorised chemicals being used that are likely to be more harmful, and apart from harming birds and bees these are likely to be harmful also to the humans engaged in spraying them, particularly when essential precautions are being ignored.

Due to unethical marketing practices and business interests, harmful chemical sprays are being sold and used on a large scale, on a very large number of trees, where they are not really required and in fact can be very harmful. It is this wider reality we need to confront.

If national-level remedial action is taken we will be able to save countless birds and bees, apart from preventing other avoidable harm to ecology, health and food safety.

Bharat Dogra, a journalist and author, is honorary convenor of the Campaign to Protect Earth Now 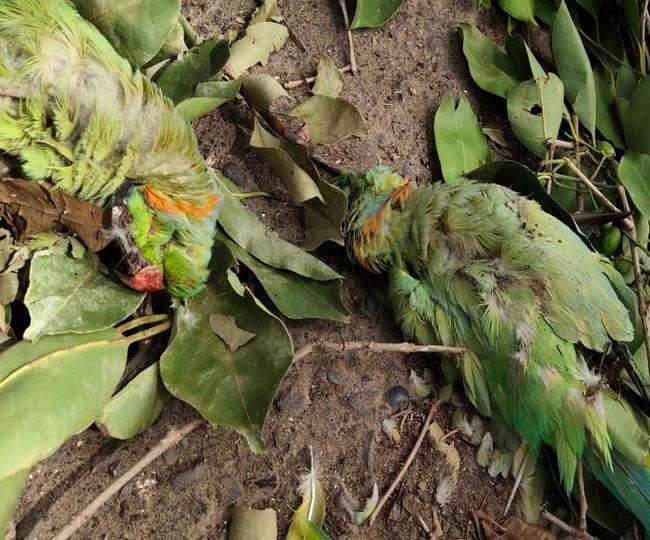