A Sense of Brotherhood: Behind the Refugee Crisis in Mizoram

'Everyone is contributing.. everyone is helping them out'

KOLKATA: “The role that civil society organisations play, or the NGOs play, the church etc, it is a very important role since they are very connected to the local people. In every mohalla or zheng as we call them, there are branches of these civil society organisations… They have small units at every village level,” a highly placed police source in Serchhip, Mizoram tells The Citizen.

The steady arrival of refugees from Myanmar since February ’21 has inspired the people of Mizoram to provide aid and shelter to the displaced with almost no help yet from the Central government.

The Young Mizo Association and the Village Councils are the ones taking care of refugees on the ground. The YMA is known to be the most influential civil society organisation in Mizoram, with outfits and branches in nearly every village in the state.

“Whenever the YMAs or other NGOs hear that there are people who are coming across the border, the concerned YMA will be waiting at the border to take them across,” confirms Ezrela Dalidia Fanai, a journalist based in Mizoram who has been covering the refugee crisis there for a year now.

The police official in Serchhip described how these organisations have come together to garner all the resources they can, to help the displaced. They are mostly settling in the border districts.

“After the coup happened in Myanmar last year around February, there has been an influx of people. Now how do we label them, that is yet to be legally decided. People who have been displaced from Myanmar have crossed over to Mizoram,” the source said.

“It’s very important to understand that at the border we have a Free Movement Regime, FMR we call it, so there is anyway a lot of interaction which takes place between the local people who live there. It is around 14 to 15 kilometres from the border, where there is no need for a formal visa or formal documentation to cross over.”

A statement from the United Nations delivered by the Secretary-General’s spokesperson Stephane Dujarric last May spoke of a surge of 4,000 to 6,000 refugees who had moved into India after being displaced from Myanmar. “There has been widespread violence against citizens across the country. Clashes between the Myanmar Armed Forces and the ethnic armed organisations in border areas has intensified.”

India shares a 1,600 km stretch of border land with Myanmar. In 2022 about 2,000 refugees have already escaped into India, according to government sources and NGOs.

Reports suggest that people living in Chin, Myanmar, have most keenly felt the brunt of the military coup and political unrest. Mizoram shares about 500 km of border land with Chin state.

The source mentioned that ethnically too some of the refugees and locals of Mizoram are from a similar background, owing to marriages across the border. “There is an organic linkage between the people here, and the people on the other side, the Chin state. So there is a sense of brotherhood.”

They elaborate that the local people have been very supportive, providing aid and resources that the refugees may need. “I have spoken to some of them… the people that are coming are in very very dire circumstances. When you are faced with political violence, it is very difficult for us to even imagine, since we live in a democracy.”

“As far as settlement is concerned, they are only concentrated in the border areas. It’s a very small population, hardly 10 to 12 lakhs… so mostly on any political or social issue there is a unity in the general public opinion,” they say, speaking of the people of Mizoram.

As a result there is no comprehensive process of documentation, they explain. “A major problem is of identification and distribution, so that nobody gets double aid or gets missed out. The village councils have formed a kind of social network where one can check whether everyone from a particular community has been covered or not.”

In the personal opinion of this source, elsewhere in the country this type of social solidarity is dying down. “So that is a social capital that has been used here, both for Covid management and for the refugee situation.”

At a press meet in December, Chief Minister Zoramthanga stated that he had been promised a plan for the refugee crisis by the prime minister, saying, “The Centre is willing to help, but it cannot directly help the Myanmar refugees because India is not a signatory to the UN refugee convention of 1951 and its 1967 protocol.” So far, this is all the assurance New Delhi has given to the state of Mizoram.

This came after Zoramthanga had declined the Centre’s instructions earlier in the year to the Northeastern states and the Assam Rifles not to provide the refugees shelter and deport them instead.

The UN team stationed in Myanmar have requested all countries in the region to come forward and offer refuge to the displaced people crossing borders, and to allow humanitarian workers to help them in any way they can.

According to Ezrela Fanai, New Delhi’s persistent inaction is indicative something else.

“I have been following them [the refugee crisis] since last year, since the military coup. What happened is that MHA has given an order that we cannot grant them the refugee status and all that, but MHA is also indirectly helping them. They cannot help them in an official capacity, so what they are doing is that they are turning a blind eye. Anyone who came here on humanitarian grounds is being accepted,” she says, referring to the Union Ministry of Home Affairs.

India had agreed last year to the ASEAN five-point consensus on Myanmar, seeking the immediate cessation of violence and utmost restraint from all involved parties.

Fanai goes on to elaborate, “Centre is not giving any official statement, but it is very obvious that it is allowing them to come in… No one can take initiative in a formal way right? So NGOs are helping them out, lots of funds are there… Everyone is contributing, in terms of money, clothes, essential items, everything! So everyone is helping them out.”

“There are about 700 refugees in the area right now,” says Lalramliana, president of the village council of Farkawn, a village in the Champai district which is one of the border areas in particular that has seen a large number of refugees coming in.

In a town outside of Farkawn, the YMA has also set up a tarpaulin camp for displaced women and children, where the children are given classes. This area doubles as a classroom and a cafeteria.

“The refugees basically want safety, and for that reason they are moving into Mizoram. Not just from Chin state, but from other areas in Myanmar too,” says Lalramliana.

“They get food and clothing from charity from the Mizoram people… The village people are distributing the donations themselves.” Many churches have taken up the responsibility of conducting donation drives and then distributing the resources amongst the refugees, he adds.

These houses are built for one family each, but in some cases, they are being occupied by two families.

“Whether they settle here permanently or move back to Chin state will depend on the conditions of those respective areas, and on the wishes of those displaced,” Lalramliana tells The Citizen.

No documentation process has so far been initiated to monitor the influx of refugees into Farkawn. For those who want to settle in Mizoram permanently, the lack of identification documents granting them refugee status continues to be a serious concern.

As for how the refugees are making their way to the villages, Lalramliana says there are officials stationed at the borders who are taking the first step, of relocating the refugees crossing over in search of peace and stability.

Reports suggest that most refugees are making the journey to Mizoram by land: on foot or by hitching rides on vehicles headed to the state. They run the risk of being stopped on the way by the military to check their identification documents.

In Farkawn the village council has joined hands with the YMA, who are the frontline workers, in order to help as many refugees as they can accommodate.

“We cannot do anything more for them at this stage, other than taking them in and giving them shelter… No charity or statement has been given from the central government so far,” states Lalramliana. “There are no such restrictions in terms of how the Village Council helps them: we assist them in whatever ways they need.”

Of the reports of many refugees arriving with serious health issues he reveals, “They are having lung problems, mostly the old people coming in have lung issues, and they have been admitted to the village hospital. Many also need medical attention because they have been affected by the pandemic.”

A recent report said that four refugees had arrived in Mizoram with shrapnel wounds, and had to be admitted to a private hospital in Aizawl, where one of the wounded succumbed to his injuries.

“They are having a drinking water problem. They also have issues with electricity, which is a big problem for them right now. The Electricity Board in Mizoram knows, but they are not taking any action in this,” says Lalramliana.

Despite the consistent efforts of the Mizo locals to help people displaced from Myanmar, many refugees are still unable to get employment once they move to the villages. “They only get farming jobs. Other than the charities that they get from the Mizoram locals, they are majorly only involved in farming jobs.” 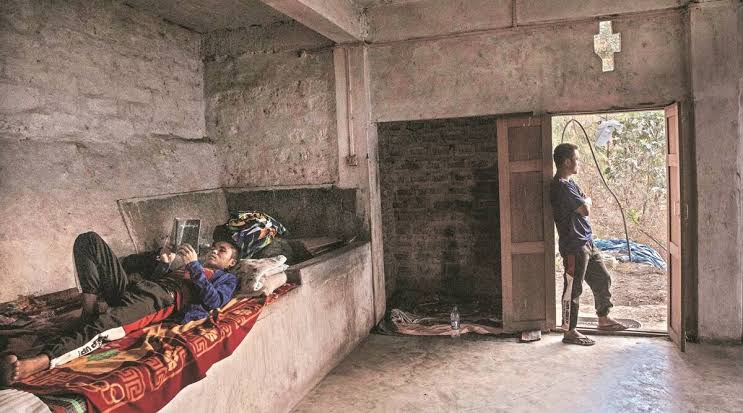