Julian Sayarer is not a person who lacks ambition.

In his twenties, he broke the 18,000-mile world record for cycling around the world. With a background in political science and a passion for travel, he has written multiple books, many of which have won awards. And at the advice of an Israeli writer he met at the Edinburgh International Book Festival, he decided to take on what many see as being the most divisive political situation in the world – that of Israel-Palestine.

Many readers may lose interest at this point. What, after all, can a relatively young writer tell them about a situation to which they are deeply connected? What can a do-gooding outsider bring to the table, spinning through the country on two wheels while dressed in lycra? The whole venture seems to smack of naivete.

I read this book while being exposed to two other completely different artistic works that take up acts of engagement in world events carried out by (mainly) Westerners who believe that a different world is possible.

The first is a short, personal meditation by the literary heavyweight Nathalie Léger. The White Dress (translated from French by Natasha Lehrer, Les Fugitives, 2020) considers the 2008 journey by performance artist Pippa Bacca from her home in Milan to Jerusalem. Bacca planned to hitchhike across the Balkans, Bulgaria and Turkey before crossing into Syria and Jordan while wearing a white wedding dress and recording acts of kindness on the way.

The second was The Do Gooders, a 2013 documentary by director and producer Chloe Ruthven which questions the utility that institutionalized aid and volunteers provide in Palestine.

Ruthven draws on her background as the granddaughter of Derek Cooper, a man who was so appalled by the British betrayal of the Palestinians that he and his wife loaded a jeep with medicines, blankets and other supplies and drove to Palestine from Ireland in the 1950s. Cooper and his wife eventually cofounded Medical Aid for Palestinians, one of the most prominent charities serving the Palestinian people to this day.

Sayarer is a man of optimism, which is difficult to muster when considering the Palestinian situation. There is an internal struggle to rebuff the instant disdain felt when presented with such bounce.

I need quotations to uplift me out of such cynicism. To remind myself that it is a matter, as attributed to Antonio Gramsci’s 1929 prison diaries, of the pessimism of the intellect and optimism of the will. That optimism, during a negative situation, is a sign not of naivete, but of leadership. I have to intellectualize myself into a position of optimism, in other words.

In the introduction to Fifty Miles Wide, Sayarer explains the nature of his approach and outlines his credentials to take on this challenge.

He is British of part-Turkish heritage and his knowledge of the region is thorough enough to be able to comment, for example, on the support, both medical and otherwise, provided by Israel to jihadi fighters in Syria.

Sayarer’s understanding is more profound than his appearance might suggest and the innocence of his mode of transportation is deliberate as it facilitates freer communication with those he encounters on his travels. The bicycle, he writes, “shelters you from the world, concealing those causes for cynicism and for suspicion that adults acquire in their instinctive views of one another.”

Someone on a bicycle is seen as disarmingly innocent, Sayarer adds, automatically inviting empathy.

“And if you can take that energy into encounters with checkpoints, with walls, with soldiers, with both the wretched and the wronged, then by bicycle, I swear, you go fortified forever with that most potent of defenses, a smile.”

For Pippa Bacca, the performance artist, however broad her young smile or whimsical her approach, the defense was insufficient. She was raped and murdered while hitchhiking through Turkey, her camera stolen and later linked to her murderer.

Léger’s conclusion on the nature of the human soul, of a lack of conscience and untapped capacity for evil, appears to run in diametric opposition to that of Sayarer. The White Dress makes for harsh reading, particularly by those with a desire for change.

For Sayarer – as a young guy on a bike in a place where the occupation is mainly enforced by soldiers who are also young men who would probably rather be on a bike (“Cool,” remarks one) – the stakes were possibly lower than those that Bacca exposed herself to.

Sayarer’s journey is not, however, without confrontation, risk or danger, although much of that fear is for things that he rationalizes are unlikely to happen, or befall those he meets.

Revealing his thought process as he makes a bed for himself along a roadside, Sayarer writes that “I found humans marked mostly by their tenderness or, at worst, their indifference towards others … I am not afraid as I fall asleep. But none of this is really faith, and certainly not bravery, but more, in all honesty, just arithmetic.”

While cycling through the West Bank, a rock is thrown that strikes Sayarer’s head. “Steel yourself, don’t pass out,” he repeats to himself until he gets to safety. At another juncture, he asks an Israeli settler for directions. “In Ramallah, they cut your throat,” is the reply. In Ramallah, Sayarer attends a hip-hop festival instead.

There’s a romantic belief in Fifty Miles Wide in the universality of the better side of human nature, of complex impulses being shared by all, which is found in descriptions like this one:

“I understood how it could be that those Palestinians I met, none of whom had ever lived in their own independent country could still feel with such strength the freedom that was in their spirit. Because to sense freedom is like seeing a person you love out of the corner of your eye for only a moment in a crowded room. You still recognize them.”

The book is written in a practical, methodical way as the journey continues across the length and breadth of the territory of the former British Mandate. This traveler is undauntable, although his recorded dreams dredge up further perturbation felt by the injustices he encounters.

The author has been perhaps overly diligent in recording each encounter along his journey, itemizing all of his research and experiences. The book would have benefited from structural editing that underscores the book’s themes and pulls forth a stronger narrative from its documentation.

This criticism aside, Sayarer provides a jaunty yet informative account of crossing a tiny, topographically varied landscape severed and distorted by a process of expulsion and oppression of one people for the benefit of another.

His reflections provide a taste of the feel, rhythm and value of the land as a whole, the commonalities between people and the potential for an alternative future needed by all.

Selma Dabbagh is a British-Palestinian writer of fiction. 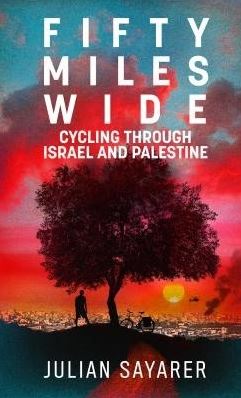