An ‘Empire of Critique’ for Queer Palestinians to Judge

“I know that there is no pink door through Israel’s illegal, racist wall that welcomes queer Palestinians while oppressing others,” queer Palestinian activist Haneen Maikey wrote in June 2017.

In her Newsweek op-ed titled “Why We Should Boycott Gay Pride in Tel Aviv,” Maikey called for a boycott of “pinkwashing” – Israel’s use of allegedly LGBTQ-friendly discourse to distract from its oppression of Palestinians. Director and co-founder of the Palestinian LGBTQ organization alQaws, Maikey is a prominent “pinkwatching” activist, calling out Israeli depictions of Palestinians as homophobic, uncivilized and therefore undeserving of human rights.

It is in this context that anthropologist Sa’ed Atshan’s Queer Palestine and the Empire of Critique examines how LGBTQ Palestinians and their allies struggle to combat homophobia without reinforcing Israeli homonationalism. Coined by queer theorist Jasbir Puar, “homonationalism” marks some nation-states’ recent shift to include certain gay and lesbian subjects as they exclude Muslim and Arab others perceived as threatening to the body politic.

Rooting his reflections in his queer Palestinian identity, Atshan combines media analysis with interviews and ethnographic research he conducted in order to examine queer Palestinian activism since the early 2000s.

Such activism, he contends, has waned since the early 2010s, not only because of Israeli repression of Palestinian activism in general, but also because of the tactics employed by certain radical anti-imperialists.

Taken together, these various actors form an “empire of critique” that has led to the silencing – or, in Atshan’s terms, “discursive disenfranchisement” – of queer Palestinians. With his book, Atshan aims to move beyond what he characterizes as the recent pinkwashing/pinkwatching binarism by raising the voices of Palestinians supposedly disenfranchised by critique.

In each chapter, Atshan explores a different arena in which he believes that pro- and anti-Zionist critics have discouraged solidarity with LGBTQ Palestinians. These include local Palestinian activism, global activism and solidarity boycotts, journalism and film, and academia. LGBTQ activism in Palestine evokes the age-old quandary of how to effectively engage in multi-issue struggles, and Atshan’s position is clear: pinkwatching activists are doing a disservice to queer Palestinians by prioritizing anti-Zionism over anti-homophobia.

Atshan designates the many forms of surveillance, control and criticism to which queer Palestinians are subject under the “empire of critique” of the book’s title. On one end of the spectrum, Israeli authorities exploit homophobia as a blackmail tactic, threatening to “out” Palestinians to their families if they do not cooperate. On the opposite end of the spectrum, Atshan contends, this “empire” also includes the “radical purism” of alQaws, whose anti-Zionism shapes their approach to LGBTQ liberation.

Atshan cautions against the false equivalencies that result from comparing such disparate forces of repression, but then curiously proceeds to do just that.

By using empire as a metaphor for critique, he still implies that the Israeli state’s terrorization of Palestinians may be compared to heated disagreements amongst anti-Zionists. In his discussions of the latter he defines Western-based academics’ reinforcement of this “empire” as “a discursive apparatus that … subjects people around the world to its gaze, analysis, expertise and critique.”

This is a valid concern regarding academic research, but “empire” becomes problematic when used as an umbrella term referring to both leftist discourse and literal genocide.

Atshan contends that queer Palestinian activism has declined since the 2010s in part because of a turn to anti-Zionism at the expense of anti-homophobia. Yet the conclusion also recognizes that this shift reflects “the general paralysis of activism within broader Palestinian civil society, largely as a result of the Israeli occupation” – which has only continued to worsen since the book’s publication.

Nevertheless, Atshan states that queer Palestinians and Israelis “are often victims of the same Israeli state,” promoting more solidarity between them. It is crucial to urge queer Israelis – and indeed all Israelis – to fight the occupation. But given the current political climate it seems unreasonable if not downright unethical to suggest that queer Palestinians foreground the concerns of Israelis.

If there has been a shift away from fighting homophobia and towards anti-Zionism more broadly, then it may be because, as Atshan acknowledges, most Palestinian anti-homophobia activists “believe it is impossible to do so radically without an end to the Israeli military occupation.”

Given his commitment to representing individuals participating in those struggles, it is unclear why he sees the focus on anti-Zionism as primarily the result of activists’ frustration with critique. This focus could be an individual’s strategic form of compromise when faced with urgent material demands.

Even as they fight the occupation, grassroots activist groups still engage in mutual aid through local support networks that are not exposed to the potentially deforming power of the Western media. If alQaws’ press releases often focus on pinkwashing, that does not mean that the services they offer locally are any less present.

Far from abandoning LGBTQ activism, some self-identified queer Palestinians may alter their strategies according to audience or context. Perhaps by prioritizing anti-Zionism in their messaging, they are emphasizing that Palestinian liberation is central to how they conceive of desire, intimacy and kinship in an age of pinkwashing. Without a greater diversity of perspectives – including those of the “radical purists” – the reader is left wondering why this study dismisses pinkwatchers like Maikey as abandoning the LGBTQ cause.

Atshan’s intervention stems in part from his reconsideration of Columbia University professor Joseph Massad’spolarizing concept of the “gay international,” which refers to the exportation of Western sexual identities such as “gay” and “heterosexual” to the rest of the world. According to Massad, this endangers other ways of understanding sexuality, recasting the world in the West’s image and serving as a justification for Western interventions abroad.

Inspired by Massad’s concerns, Atshan is refreshingly attentive to the many forms that same-sex desire can take. Accordingly, he defines “queer” as encompassing not only self-identified LGBTQ people, but also those who have same-sex interactions without necessarily adopting such terminology. At the same time, he positions his project’s ethnography as an antidote to what he and many others have understood to be Massad’s blanket dismissal of LGBTQ Arabs.

Given Atshan’s nuanced understanding of sexuality, it would be helpful to know more about the demographics of the subjects of his 65 “formal and informal” interviews. These are meant to present a plurality of perspectives. But the quotations that he includes from his interviewees are largely from self-identified LGBTQ people (many of whom are activists), leaving the reader wondering how his research engages with the diversity of “queer” sexual practices that he initially evokes.

Atshan unmasks the “white gaze” that is behind so much Middle East Studies scholarship, in part by including his own experiences as a queer Palestinian in his ethnography. This methodology of “autoethnography” aims to mitigate the violence that anthropological research may enact upon its subjects. However, Atshan does not address some of the overarching methodological concerns about empirically based approaches to studying sexuality.

Western-based researchers make their subjects intelligible for their target audience; to consent to be the object of study is thus to expose oneself to analysis and potential surveillance. Any study seeking out queer Palestinians thus precludes the participation of those who do not recognize themselves in such terms, as Atshan notes – and this likely includes those who are poor, do not speak English and/or lack internet access.

If he does not attend to the diversity of people outlined in his initial definition of “queer,” then he should make such limitations more explicit. Atshan might also acknowledge that some scholars’ refusal to engage with ethnographic studies of sexuality (including autoethnography) may constitute resistance to the demand for sexual disclosure, not merely a lack of intellectual rigor.

Perhaps most admirable about Atshan’s project is his intention to avoid the condescension common to much academic engagement with activism.

He finds that Jasbir Puar’s and Massad’s critiques of sexual rights discourse disenfranchise activists who find themselves being written off as agents of imperialism by US-based professors. Atshan differentiates between such stagnant “radical purism” and his more positive and dynamic “material pragmatism,” which aims for greater pluralism within the queer Palestinian movement.

Laudatory though Atshan’s aim may be, it is also a paradoxical one to find in an academic book that criticizes radical activists in the name of promoting dialogue. If he sees theory as responsible for activism’s decline, then why are his own critiques of Maikey exempt from the evil “empire” he decries?

Such a position reflects the liberal tendency to cast radical leftists as dangerous extremists in the name of “seeing both sides.” And why is Puar excluded from the realm of “material pragmatism” when she has participated in queer solidarity work beyond the confines of the academy, including the American LGBTQ delegation to Palestine that Atshan co-led in 2012?

Atshan also repeats the most facile critiques of Massad’s Desiring Arabs without addressing Massad’s rejoinders to them in his most recent book, Islam in Liberalism.

Atshan accuses Massad of reifying an essential “Arab” sexuality, whereas Massad has explained that it is the universalization of the homo/hetero binary that does so by ignoring the dynamism of non-European forms of self-knowledge.

Atshan also portrays Massad as condescending to LGBTQ activists in the Arab world, implying that he referred to their “egregious theoretical illiteracy,” when Massad was specifically condemning academic complicity with imperialism in the interview in question.

Massad then goes on to explain that, like nationalists and Islamists, “LGBT” Arabs may be anti-imperialist politically while remaining unwittingly committed to specific forms of knowledge that buttress the East/West binary.

By reinforcing polarizing interpretations of Massad’s work without responding to his most recent book, Atshan undermines his purported aim of adding nuance to debates on sexual imperialisms.

Ultimately, queer Palestinian activists will judge whether this academic study strengthens solidarity with their movement, or whether it merely fuels the fire of an already heated debate.

Queer Palestine and the Empire of Critique by Sa’ed Atshan, Stanford University Press, 2020

Blase A. Provitola is Visiting Assistant Professor of Language and Culture Studies at Trinity College in Hartford, Connecticut. Their research centers on the relationship between sexual identity and colonial history in contemporary France and Francophone North Africa. Electronic Intifada 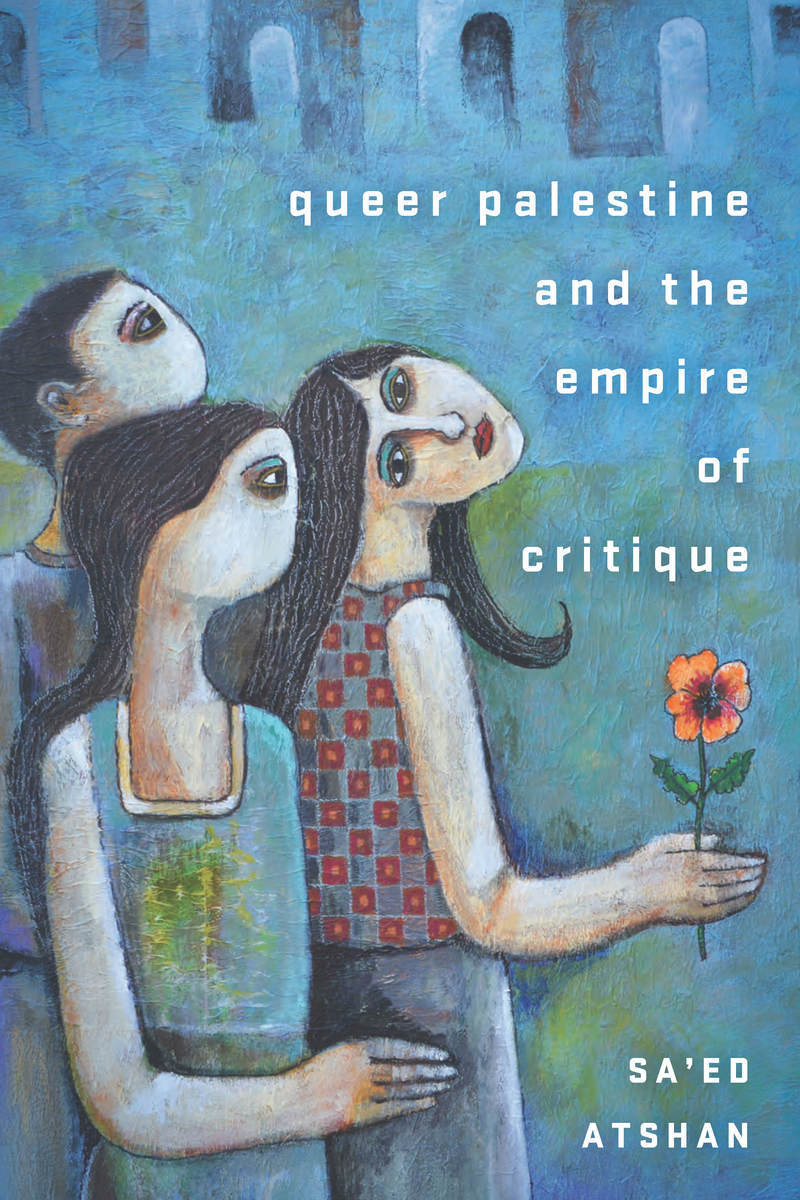