In my hands is a copy of the impressive Court & Courtship. The recently published 250 page book of rare miniature paintings from the lush TAPI (Textile and Art of the People of India) collection, is a visual delight.

There are paintings from the16th century from the early Rajput Bhagavata Purana. The killing of the demon Shankhasura by Krishna is dramatic. There is a 17th century rasikapriya illustrating the classic texts of Sanskrit and Hindi literature from the courts of Bundelkhand. And several ragamalas. The earliest Pahari painting in the collection is a stunning ragamala from the 1680s. The ragamala series from the Deccan is from the 18thcentury.

Splendours of the courts of the Deccan, Rajasthan, Central India and the northern hills are painted with passion. The paintings included in the catalogue are selected by art historian JP Losty from the Indian miniature collection of Praful and Shilpa Shah.

The Shahs are a husband and wife team who were interested at first only in collecting antique cloth. During their constant search for ancient cloth they came across paintings. They were attracted to paintings from the past that had details of clothes worn by the subject and which concentrated on the style of textiles of the times.

Apart from royal portraits of Mughal emperors, princes and courtiers, paintings of women are splashed across the catalogue with colourful abandon. Sensuality is sensed even when the subject is an elephant. The paintings of elephants are delightful. Elephants were once the imperial symbol of power and wealth and treated by kings as dearly as children of the family.

The fine drawing of Mughal elephant Khushi Khan from the mid 17th century is a pretty picture. But the grey elephant from the late 18th century is not far behind. The elephant is shown running amok. Ichor streams down its dark temples as a group of men desperately try to flee the mighty animal’s wrath.

Once the political power of many monarchs began to slip in the 18th century, painters lost interest in depicting grand durbar scenes. The artists looked for inspiration elsewhere, and the eye of several of them rested on women of the time. There are paintings of numerous women in gorgeous attires like jama, paijama, angarkha, odhni and patka. Women are also painted in different situations like worshipping, bathing, tending to their hair, conversing, embracing, playing Holi and of course as objects of male desire.

Paintings from the 18th and 19th century depict women dressed in different textiles and costumes, and using cloth as canopy, turban and qanat.

During this period of poor political scenario, the elephant became another favourite subject of painters. Portraits of elephants are illustrated with varied caparisons and apparel. There are two portraits of horses by the mid 18th century Jaipur artist Ramjidas. This artist is known in other publications only as an illustrator of the many moods of men.

The Shahs have been collecting cloth for over four decades and once they had piled up a considerable collection from different centuries, they put it under one roof called TAPI. That was in 2001.

Today the miniature painting collection has evolved into a precious collection of rare Indian textiles, and art. The name of the collection is also a tribute to the river Tapi, the life force of the textile town of Surat, in Gujarat.

Praful is a textile industrialist and painter, while Shilpa is an advertising professional. Together they own a treasure trove of cloth and paintings, including woven jamdani, muslin brocade, ashru or kalamkari hand block prints and embroidery.

Part of the textile collection is cloth from the 14th century that was woven, dyed and printed in Gujarat, and rare shawls from Kashmir.

They have acquired exquisite Kashmiri shawls since the 1970s. The kani shawl weaving technique of Kashmir had vanished by the 1870s. Wherever they found shawls woven in the kani style they bought them and piled up a collection that was already more than 100 years old. More recently the Shahs wanted to share the beauties in their possession with others. So the Kashmiri shawl collection was showcased in an attractive catalogue published in 2012.

Now comes Court & Courtship: Indian Miniatures in the TAPI Collection catalogued with much love by Losty.

Losty is former curator of London’s Indian manuscripts and paintings at the British Museum and British Library. When he was asked by the Shahs to catalogue their collection of historic paintings, he was delighted to do so.

In the introduction to Court & Courtship, Losty writes:

With such a collection deciding on the order for the catalogue was doubly important…In the end we settled on a broadly chronological approach that inevitably resulted in mixing up the schools. This had the not unexpected advantage that changes in fashion in subjects over the centuries could be seen to be not limited to just on school but happening across artistic boundaries.

This scholarly and colourful catalogue with rare paintings accompanied with eye opening information is a must for all lovers of art who would surely love to have, and to hold Court & Courtship as their own.

Court & Courtship: Indian Miniatures in the TAPI Collection by JP Losty is published by Niyogi Books, 2020. 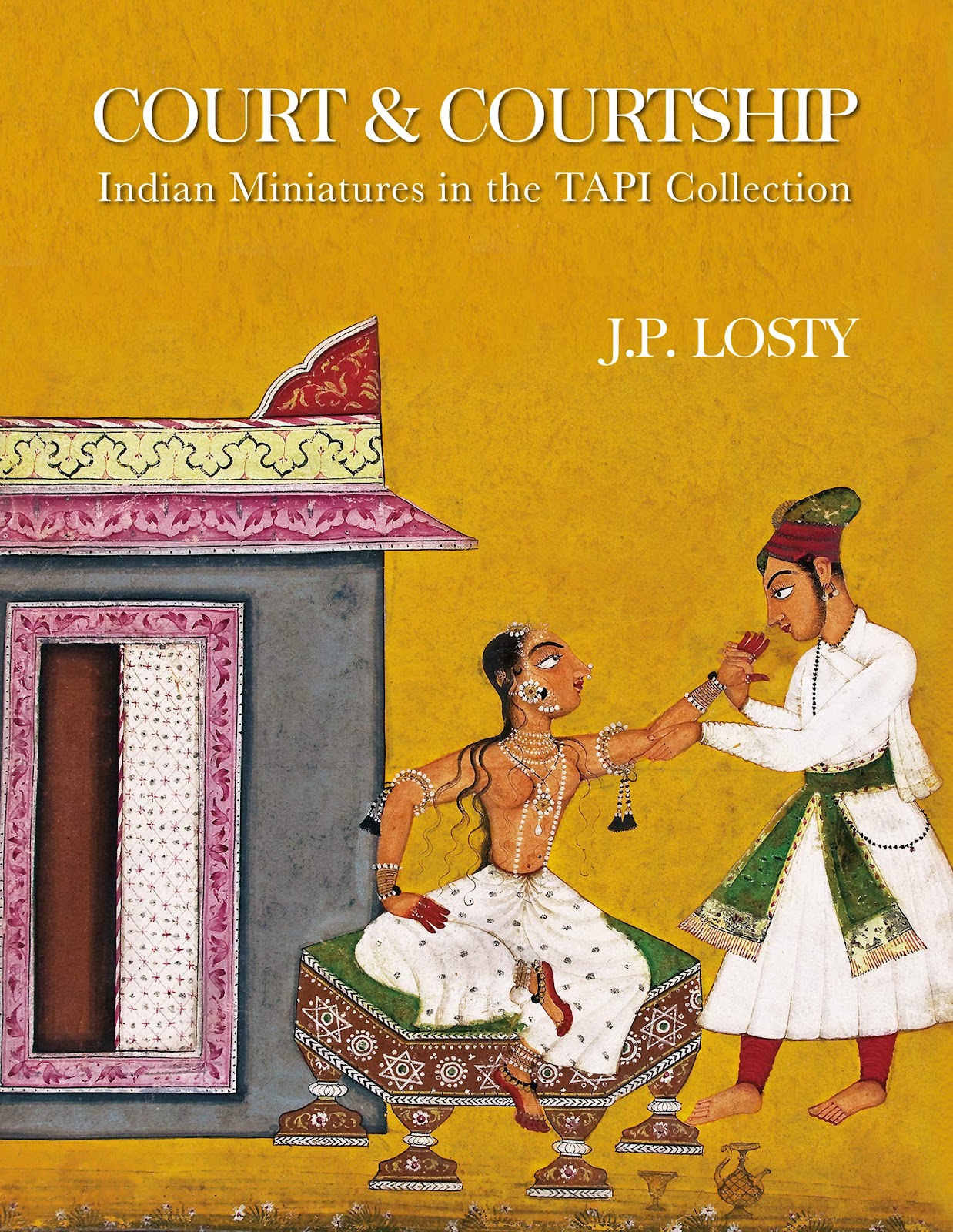