Even the almighty Donald Trump of the US of A, who had called protesters outside the White House terrorists a few months back had to bow before the mass movement created by the death of George Floyd to introduce far reaching police reforms.Even though it was too late in the day and visibly half hearted.

Sadly India is still to take its lessons about policing.

'Khaki in Dust Storm' the Police Diaries Part 1 of Amod K Kanth,a highly decorated police officer who handled sensational cases like the death of Indira Gandhi,1984 riots in Delhi, transistor bomb cases leading to the death of 80 persons, assassination of VIPs like Lalit Maken, Arjun Das, General Vaidya and as DIG investigation with the CBI in the Rajiv Gandhi assassination in 1991 is testimony to this as he goes analyses and criticises the policing system prevalent in the country.

Through his career of 34 years , while following the rules, Kanth has consistently hit out at what he describes as the "vintage Indian Police Act of 1861, made after the First Indian war of independence in 1857, to create a repressive police force, continues to be an archaic and unchanged system."

Kanth writes in his book of the untiring efforts of IPS officer Prakash Singh that made the Supreme Court to come out with a set of reforms in 2006 for a Model Police Act.

Kanth, as DGP Arunachal Pradesh at that time, immediately applied the Model Act in the state with the concurrence of a helpful Chief Secretary.Within days, advisors convinced the Chief Minister at the time that this Act would take away all his powers and Kanth was shown the door.

Pointing to some archaic rules being followed in the training of the Police officers in the chapter,"My calling: I became a cop," he writes,"Beginning with our initial training, the emphasis was on memorising and strictly enforcing a police station set up in terms of both documentation and actual functioning, that was entirely based on the so-called Punjab Police Rules (PPR).

"Some of the wisest and most efficient and thoroughbred senior and junior officers alike, including our trainers,found no worth in the probationers and young officers who did not know the names of 25 PPR registers on their finger tips.Quite often even after serving nearly a decade in the police..."you could be made to stand up on the bench" if you failed to name any particular register."

"These registers meant to record the birth and deaths of human beings and stray cattle were still on the statute book not only in Punjab,Haryana and Delhi, the story remained the same in major parts of the country because 'contemporary wisdom could never dare to match the rule makers of the British times" he writes.

At another place he rues, "In india...we have portrayed and also treated the police as a body external to the civil society in an adversarial relationship with the community assigned with the task to control crimes...and maintain law and order through force."

The moment Kanth got the news of Indira Gandhi's assassination on the morning of October 31,1984, his first reaction was "Was it a policeman?"

He maintains that till date he does not know why he said that but it is still there on record and he did not heed the advice of well- wishers who asked him to delete it.

He maintains that the 1984 riots had the most cathartic effect on his psyche when he was DCP Central District which had the maximum Sikh population.

Interestingly, the Central District saw only about 38 (20 Sikhs and 18 Hindus) casualties as compared to the over 3000 mortalities in Delhi he writes that after the 1984 riots he was "very embittered" that he could not perform his duty as well as he wanted to.

He vents his frustration by mentioning the incident where several Congress leaders led by Karol Bagh MP, Dharam Das Shastri arrived with truck loads of supporters to the Karol Bagh Police station demanding that the people arrested for looting and rioting should be released.

While he and SHO Ranbir Singh stood their ground "we were helpless as we were clearly not supported by our senior officer present right there."

More specifically he mentions "we went inside the SHOwroom where Mr.Hukam Chand Jatav, (Additional Commissioner of Police, Delhi Range) was sitting.He very politely and diplomatically said,"You see Amod, Mr.Shastri is right. You must deal with caution.This is a case of mistaken identities."

Frustrated, he left the scene and wrote,"a thought came to me; we should go somewhere far away from the madding brutal loss of life, bloodbath, zero human values and...uncalled for humiliation."

In his first posting in Pondicherry, he had the temerity to lodge an FIR by a cigarette seller who had been slapped by an MLA. The man had retaliated and slapped the legislator, with Kanth directing the police to lodge both FIRs for investigation as per the law.

He did not realise that the minority government of Chief Minister Ramaswamy was heavily dependent on this one vote and obviously within one month he was sent back to Delhi after the CM complained to the Home Minister.

The book is a treasure house of such unknown anecdotes written in a racy manner to attract readers.

But Kanth says,"The main purpose of writing my diaries is not to sensationalise the events in my life which I performed as part of my duty. You know that besides being a police officer for 34 years I have also been running an NGO Prayas for the marginalised, exploited and sidelined children, women and men for 32 years.Through this book I have tried to tell people, specially the police force that their role is no different from that of NGOs like ours. To win the confidence of the people in this huge country they must change their motive to serve the people instead of controlling them through the Danda."

Kanth has to be heard with respect because the man who has handled national and international terrorists and criminals during his tenure, claims that he never had to resort to third degree to get to the truth.

If Kanth can do it why can't others? 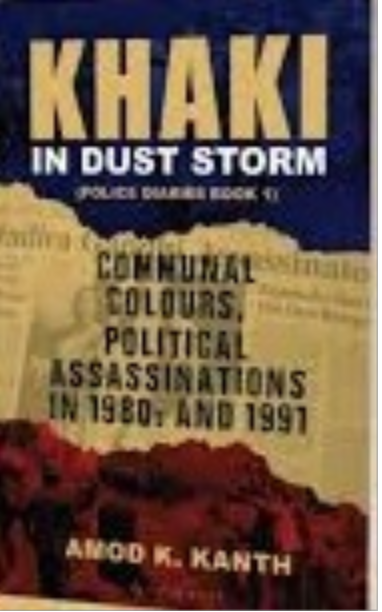