Before its release, the US ambassador to Israel warnedDanny Ayalon, Israel’s deputy foreign minister, of the “difficulties the Goldstone report could pose.” These difficulties included “action in the [International Criminal Court]” against Israel.

The US ambassador advised Israel to investigate the allegations raised in the Goldstone report in order to “help turn aside efforts to engage the ICC.” Ayalon expressed concerns, too, about “efforts to indict Israelis” for potential war crimes documented in the report.

The day after its release, Susan Rice, the US ambassador to the UN, schemedwith Ayalon on the “best means to deflect and contain the Goldstone report.”

“Help me help you” by advancing Israeli-Palestinian talks, she pleaded. Positive progress on the so-called “peace process” will help the US make the report “more easily managed,” she said.

The Goldstone report is one of six international commissions made over the past century examined by Dr. Lori Allen, professor of anthropology at SOAS University of London, in A History of False Hope: Investigative Commissions in Palestine.

With its “new and growing emphasis on the ICC as a possible international legal tool for ensuring accountability and ending Israeli impunity,” the Goldstone report was seen by Palestinians as a “turning point,” Allen writes.

But the US blunted the effects of the report and ultimately buried it to prevent Israel from being held accountable for its deliberate devastation of the people and infrastructure of the Gaza Strip.

The Obama administration’s discreet coordination with Israel to kill the report exemplifies how the mechanisms of international law function as a “producer of false hopes” for the subaltern and dispossessed, according to Allen.

International law is an “ideology, a net of ideas and beliefs that cloaks the operations of power even while presenting instruments for ostensibly challenging and restraining power,” she states.

Allen wrote this book to explore “the reasons for Palestinians’ fluctuating but tenacious engagement with liberal legalism” as one commission after another has failed to end violence or establish peace.

Indeed the smug, self-satisfaction expressed by many commissioners, the fact “that so many could feel so good about doing so little provides one clue about the power of commissions to seduce and side-track.”

Or, as Allen puts it in an eloquent passage on the Mitchell Commission, convened by the US after the outbreak of the second intifada in September 2000, investigatory commissions encapsulate “international law’s captivating allure and cold impotence.”

These investigatory committees were inaugurated by the King-Crane Commission, sent by US President Woodrow Wilson to the former Arab provinces of the Ottoman Empire in the aftermath of World War I to ascertain the political aspirations of their inhabitants.

The Palestinians who testified before the commission did so with impeccable and heartfelt liberal protestations to self-determination and democracy but were met with disdain and incredulity by many of the US commissioners.

Allen paints a devastating portrait of William Yale, one of the commission’s main advisers and corporate spy for Standard Oil, his employer.

Not all of his fellow commissioners held such views, though, and the commission recommended a unified Syrian state (including Palestine and Lebanon) under a US mandate headed by King Faisal.

An elected Syrian parliament was well on its way to establishing a liberal constitutional monarchy at the time.

In the first of many such warnings, the commission also cautioned that the Balfour Declaration could only be implemented by force over the objections of the indigenous Palestinian population.

Despite the King-Crane Commission’s findings, Britain was awarded the mandate for Palestine by the League of Nations and implementation of the Balfour Declaration was a cornerstone of its rule.

Thus commenced a “full cycle of hope and disappointment that would mark future international interventions in Palestine,” Allen argues.

This has been characterized by “collective hopes inspired by imperial promises and lip service attention to public opinion.” However, despite their evaluations that Palestinians are ready for and capable of self-governance, political machinations repeatedly dash these hopes raised by commissions.

As Allen documents throughout her exceptional book, this pattern was repeated throughout the many imperial commissions sent by Great Britain during its mandate.

Fed up with these commissions, the Arab Higher Committee – the Palestinian political body steering nationalist politics during the British Mandate – initially boycotted the Peel Commission of 1936. But it backtracked and grudgingly participated after pressure from semi-independent neighboring Arab states which were still largely under colonial control.

Allen’s chapter on the Peel Commission contains many interesting observations on the transnational solidarity with the Palestinian people sparked by the Arab Revolt, which occasioned the commission.

The Arab Revolt, which lasted from 1936 to 1939, was a combined armed uprising by Palestinians and a sustained campaign of civil disobedience against British rule and the aims of the Zionist movement. It was brutally suppressed by the mandatory government.

This chapter could have been strengthened, however, by a deeper exploration of previous Palestinian engagement with British commissions; unfortunately, these are mostly relegated to a footnote.

One of Allen’s best chapters details Palestinian engagement with the 1946 Anglo-American Committee of Inquiry. In the aftermath of World War II, Jewish survivors of the Holocaust continued to suffer under brutal conditions in displaced person camps, arousing the sympathy of liberal opinion throughout the world.

According to Allen, “there were so many offers from Arab countries to accept Jewish refugees that US President Truman thanked [Saudi Arabian King] Ibn Saud and told him how ‘heartening’ it was.”

Allen writes: “expressions of sympathy for the Jews preceded almost every Arab argument presented to the committee made in oral testimony and their written submissions. It was as if the Arabs knew that no argument could be heard unless presented on a pillow of compassion.”

However, Palestinians and their supporters argued that humanitarian concern for the suffering of Jewish people should not become a pretext for the Zionist takeover of Palestine.

The eminent Princeton University history professor Philip Hitti, addressing the committee on behalf of the Institute for Arab American Affairs, chided his fellow Americans on the commission for their hypocrisy for wanting to resettle Jewish displaced persons exclusively in Palestine.

“I didn’t hear anyone of them raise a finger in [sic] behalf of the Jews to the extent of lifting the barriers so some Jews can be admitted to the United States,” he stated. “I think we should be ashamed of ourselves for not having done it before.”

The commissioners failed to take up Hitti’s challenge and instead recommended the issue be resolved through 100,000 Jewish survivors being admitted to Palestine.

In another stellar chapter, Allen details Palestinians’ engagement with the UN Special Committee to Investigate Israeli Practices Affecting the Human Rights of the Population of the Occupied Territories, a standing committee established in 1968 which has served as a key venue for international solidarity with the Palestinian people.

This committee, according to Allen, helped make the UN “into a mirror reflecting Palestinians’ identity and demands, and a megaphone, communicating their plight and their claims, amplifying them with the proclaimed legitimacy of the UN that represents universal norms and fosters international legal order.”

Yet even in this most friendly of atmospheres, “committee members sought to maintain a hierarchy of authority for themselves as the official interpreters of the law,” according to Allen.

One committee member sternly rebuked a Palestinian surgeon testifying before the committee who was expelled from the West Bank by Israel for discussing the latter’s violations of international law.

“May I please ask you not to give your own opinions and draw your own inferences,” the committee member stated. “That is for us to do. You merely state the facts … because we want to get many other things out of you and I don’t want to spend time on matters which really are only our concern.”

This encounter encapsulates the Palestinian experience with international commissions. Palestinians are asked to audition their liberal credentials before international bodies whose sometimes sympathetic listening belies an ever-moving goal post that always seems to put self-determination further out of reach.

Allen concludes that “international law has been an antirevolutionary pacifying force” in Palestine. She likens it to a “black hole: the massive weight of its mechanisms, both ideological and institutional, have pulled energies and actions, ideas and motivations deep within it, suffocating their vitality.”

If history serves as a signpost for the future, Allen’s book expertly shows the limitations of engaging with international commissions and international law as a mechanism for Palestinians to attain their long-denied rights. 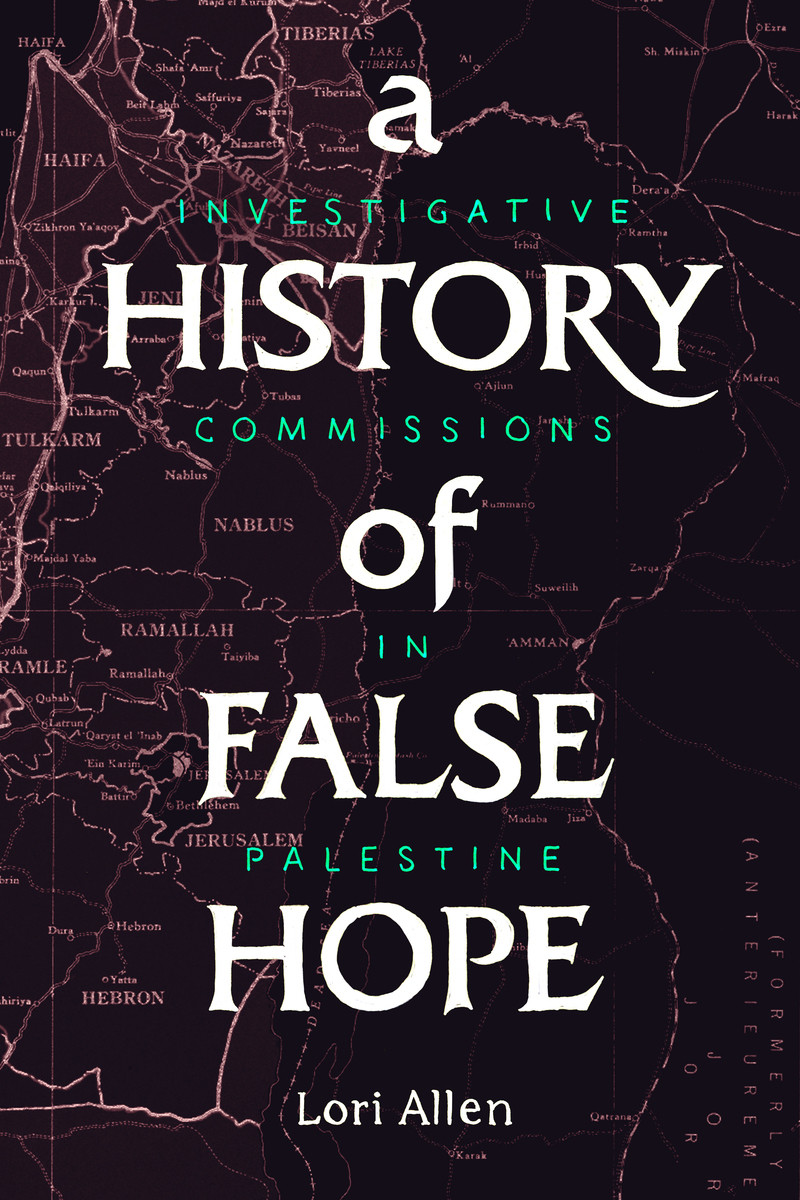