Rise of the rationale

The recent decision of the Asom Sahitya Sabha to tell people about the 175 year old monthly magazine Orunodoi (Sunrise) really is gratifying as it will give us a glimpse of what the world of journalism was in those days.

Mind you, an annual subscription to Orunodoi in 1846 was quite costly: one rupee per annum. That was not the time of paper currency. You could pay your annual subscription in coins issued by the British East India Company, or maybe, coins minted by the local maharajas and rajas of Assam.

The Sahitya Sabha will publish a book of research on Orunodoi, one of the oldest magazines with news and views. It has also compiled old articles, news and features from the magazine which will be included in the book.

What is most wonderful, by news we do not mean events restricted to the town of Sibsagar where it was published, but also from different parts of India and abroad.

But how did Orunodoi source news from other parts of the East India Company’s territory which was very vast in those days, and from abroad? There were no news agencies or wire services then for news to flow into a publication’s editorial office daily.

When its publication began, there was no telegraph. Media persons had to wait for another 10 years for telegrams. But when W.H Russell covered the fall of Lucknow in 1858 during the Mutiny of Sepoy, he could send his reports by telegram. Russell was the United Kingdom’s first war correspondent.

As a young trainee journalist with a news agency in New Delhi, I regularly made news items from telegrams some 40 years ago. The transmission of news through telegrams had remained in practice with little change since Russell’s days.

In 1852 when Orunodoi was just six years old, telegraph lines were first laid from Calcutta to Peshawar via Banaras, Allahabad, Agra, Ambala and Lahore.

Before that happened, the sourcing of news from elsewhere was done in a way we still follow at times (crediting the original publisher): simply copy from other publications in India and abroad.

Orunodoi also published news that had appeared in the United Kingdom, Myanmar, Lahore and Mumbai.

We still have record of some names like The Times (of London) or The Lahore Chronicle. News and articles taken from those publications were translated from English into Assamese.

Well! That was not something new in 1846 when Orunodoi was born. Exactly 28 years earlier, the Bengali weekly Samachar Darpan too would follow the same thing: copy from other English dailies as a source of foreign news and translate it into Bangla.

Samachar Darpan, like Orunodoi, fiercely attacked the Hindu orthodoxy. In fact the people of Calcutta were further outraged when Raja Ram Mohun Roy supported Samachar Darpan. But Ram Mohun was a ziddi sort of man, stubborn we mean…

The people attacked Roy Babu but he was not at all perturbed. And the circulation of Samachar Darpan was quite impressive, at 400 copies per week, providing a section of Bengali Babus with its unorthodox attitude.

They paid a very costly 4 Anna per copy and it proves they did not mind the princely amount.

It shows the basic trend of news gathering then and now remains much the same. Much of the time we gather news stories from news agencies and other publications. Here, the editing or rewriting job of journalists has not much changed.

Orunodoi, perhaps the first bold step of in the publishing history of northeastern India, was extremely modern in its outlook. The monthly expressed bold views on a wide array of social-religious malpractices including those of the orthodox Hindus.

This at a time when Hindu systems like Sati Pratha or burning the widow, polygamy by Kulin or high caste men, complete ban on widow marriage, and extreme degree of making a section of people untouchable were a common practice in Bengal and Assam.

Topic-wise, Orunodoi and Samachar Darpan did not differ much from India’s first newspaper The Bengal Gazette (also known as The Calcutta General Advertiser) of James Augustus Hicky, except in gossip, scandals and sensationalism. 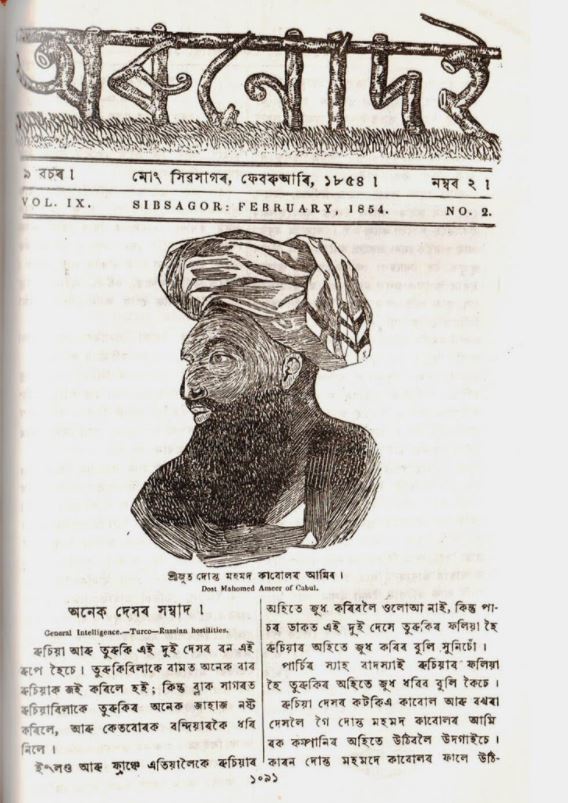 Hicky’s weekly newspaper, two sheets in three columns on either side, though described as political and commercial in nature, published news items on the Hindustan of the East India Company, England, Europe and other parts of the world. It also sourced its primary news from other newspapers and periodicals of England.

What it did, however, with scandals was supposed to be firsthand, “true” accounts. Here, Orunodoi and Samachar Darpan differed. They did not indulge in sensation, scandal, canards and gossip. That is why neither magazine came under the scanner of the East India Company, while Hicky’s Bengal Gazette did.

Hicky made public the private lives of Sahibs and Memsahibs of officers of the East India Company, including those of the Governor General Warren Hastings and his great pal Sir Elizah Impey, the Chief Justice. See the courage of Hicky, he called Hastings “Sir F. Wronghead”.

Hicky also thrashed Sir Elizah with several scandals. Hicky, just imagine in those days, invented nicknames deriding almost all the powerful persons of the East India Company and their wives.

Well! Enough is enough! Hicky’s newspaper was seized in 1782. This was followed by the Censorship of Press Act of 1799 and the Licensing Act of 1823. Under the second act, Raja Ram Mohun Roy had to stop the publication of his Mirat-ul-Akbar.

Roy Babu was extremely well versed in Persian, Urdu, Hindi and Sanskrit besides Bangla. Hence, he had no problem in publishing Mirat-ul-Akbar, a Persian publication.

Now returning to Hicky, a defamation case was launched against him and he was awarded two years imprisonment. He was also declared a lunatic and ultimately packed off from the shores of Bengal.

On comparing the issues or topics taken up by Hicky’s Bengal Gazette (except scandals), Mirat-ul-Akbar, Orunodoi and Samachar Darpan, we find that the news beats were the same as today, more or less.

They were mainly news of government (East India Company), Government Circulars, news of European nations (news of America were not in fashion then), various local events, births, weddings (mainly of the British and Rajas and Nawabs) and deaths, the history of India, scholarly books, and court reporting (crime included).

Orunodoi was published from Sivasagar, then a small township in Assam, and edited and published by Nathan Brown and O. T. Cutter, both American Baptist missionaries.

Cutter and Brown came to Sadiya in Assam in 1836 on their way to China but changed their minds to stay back in Sadiya, then a small place where tea gardens were just cropping up.

From Sadiya they came to Sivasagar in 1841: a time when the East India Company was regularly engaged in skirmishes with the Arakanese, Burmese, Bhutanese and other local rulers of Assam.

The magazine was launched in January 1846 and continued till December 1880.

Here, another surprising fact is that Samachar Darpan too was launched by Christian missionaries. Prior to Samachar Darpan, the Missionaries of Serampore near Calcutta had launched another monthly in Bengali by the name Dig Darshan in 1818. Dig Darshan was the first periodical in the Bengali language.

Here, the most interesting fact surfaces: Orunodoi, Dig Darshan and Samachar Darpan were all vernacular periodicals, yet they were launched by the English speaking Firangis.

Orunodoi was closed down in 1880. Before its closure it received massive support from liberal middle class Assamese. A section of orthodox Hindus, however, criticised the publication for being ultra-liberal and toeing the line of Westerners.

Here it becomes quite clear that the concept of ultra-liberalism was very much present in Assam in those days.

It may be surprising but when Orunodoi was first published, the people of Assam practically had no idea about the existence of North Americans, or much knowledge about railways or many other aspects of modern science. So it can be credited with bringing a major change in the mental fabrication of the local people.

Orunodoi also brought to the fore many evils prevailing in Assamese society, like the extreme dominance of the Brahmins, addiction to opium, many wives kept by big caste Hindu men, caste hatred and Sati.

Truly, the 1840–80 phase when Orunodoi was being regularly published, was the ‘Arunodoi Age’: the age of reason, age of consciousness and age of realisation. 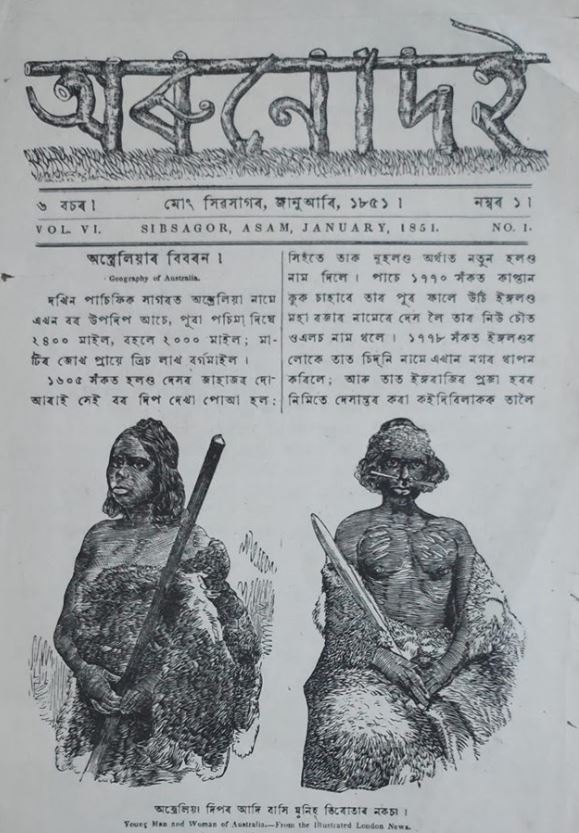