No vaccine for air pollution

She is not a scientist, not even a professional environmentalist. Jyoti Pande Lavakare is just a concerned citizen who fears that if our leadership continues to do nothing to clean the air, Delhi will soon become the cancer capital of not only the country, but of the world.

Author of Breathing Here Is Injurious To Your Health, Jyoti writes that these are unprecedented times and especially the northern part of India is going through a twindemic. The Covid pandemic and the silent air pollution pandemic together are killing people, and many people are forced to leave the city of their birth. This is the worst sort of emigration when the city's pollution is creating environmental refugees.

It is a time of national health emergency. Unlike Covid, there will not be a vaccine for air pollution, writes Lavakare. That our body is not built to breathe toxic air and human beings will never build immunity to polluted air.

The author regrets that the human cost of air pollution falls disproportionately on the poorest.

She quotes a long conversation with Santu, a worker at the Bhalswa landfill in 2019. The Bhalswa landfill site is an open dumping ground in Delhi. It was created in 1984 and it is now spread over 70 acres with a height of 65 metres.

Santu is a former ragpicker and has grown up on the margins of garbage dumps. But the way he talks reminds Jyoti of a political orator, or an actor:

Air pollution has always been here but the talk around it has increased in the last two years.

Air pollution has settled deep in my lungs. My lungs are now made of pollution.

In 70 years, this country still does’nt have clean air, water, health or education.

People are dying. We only stop breathing one final time. But what about the millions of times you suffocate while trying to keep breathing.

Listening to Santu is like hearing dialogues from a Bollywood film. Unfortunately what Santu says is real. It is true. And it is chilling.

Today, a newborn in Delhi is a smoker from its first breath. One of the shocking facts the book highlights is that children born in the polluted parts of the country like Delhi have smaller lungs, lower lung function and irreversible lung damage as compared to children born and raised in cleaner environment.

The thought that we may be nursing our children for failure, is horrific. Is that why India has such few athletes and sportspersons of international calibre? As lung capacity and overall good health is an integral part of competitive sport.

So what does this financial journalist do after studying nearly 70,000 scientific papers that link air pollution to health harm? She transforms herself into a missionary for clean air. She confronts the big problem that awareness is low and that most of the available research sits in silos and isn't accessible to the general public in lay terms.

Once fully aware that India is living in a state of national health emergency she concludes that every citizen is part of the problem. The need now is for everyone in the country to become part of the solution.

Around 2014, the author met with other parents like herself, who were concerned at how pollution was harming their children. Some of them banded together to form a platform called Care for Air (CFA), to spread awareness and to build advocacy for clean air.

Ever since CFA has been spreading awareness among thousands of students, parents, doctors and residents of Delhi and other cities.

She includes some exceptional case studies of victims of pollution-triggered lung cancer in the book. There are pages and pages on the need for everyone to be vigilant and to hold people’s representatives and governments accountable. Lazy citizens make lazy governments.

Short term and ad hoc solutions like smog towers or vacuum cleaners are no solution, and can never clean outdoor air.

The problem must be solved from top down, and bottom up. CFA insists on a collaboration between the individual, corporate and government that must unite to clean the air our elderly and children are forced to breathe.

No air purifier or expensive N99 mask can prevent this country full of sick people from dying. Till today only nature has helped to either clean, wash or blow away Delhi's pollution.

Jyoti Lavakare who lost her classical vocalist mother within three months to lung cancer, praises the one excellent step the Delhi government has taken in notifying the new Electric Vehicle. But for that vehicle electricity must be generated from renewable sources, not fossil fuels or thermal power. Clean mobility and clean, renewable energy is what will stop cities from dying from dirty air.

The day the wealthy choose to take public transport is when the difference in our air quality will surely be visible. But for that to happen clean, reliable and safe public transportation, powered by clean fuel is required.

A dream, that continues to wait to be realised. 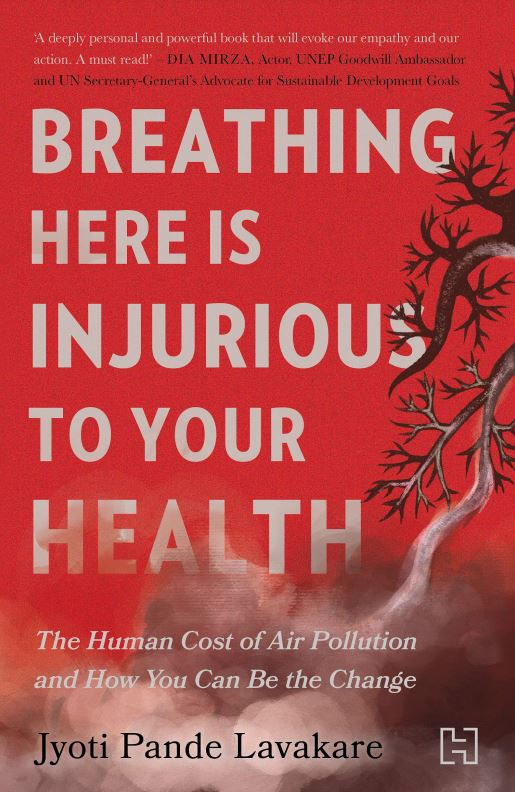 Breathing Here is Injurious to Your Health by Jyoti Pande Lavakare is published by Hachette India, 2020