In her search for connecting civilisations, Sunita Dwivedi has been on the road for decades.

Buddha in Gandhara is her fourth book. It recreates a journey in the footsteps of Buddhism, along the Lahore-Peshawar and Kabul-Samangan routes to the once thriving cities of Gandhara.

The seed of her travels in Gandhara was sown nearly two decades ago in the verdant Ferghana Valley of Uzbekistan. Ever since she has been following the trail of travellers and traders of ancient India who came to Ferghana for the best wine, heavenly horses and silk. In return they left many of their gods and goddesses in the valley.

On one of her trips, the author was lucky to be on the excavation site. In the valley an array of Indian deities were found. About 30 km from Ferghana at the local museum of Kuva she discovered that goddesses Sridevi, Manjushri and Kubera were once worshipped by the inhabitants. This is much before Islam became the dominant religion in the region.

Centuries of trade along the Wakhan Corridor drectly into the Pamirs throught the Khunjerab Pass via Kashgar closely connected Gandhara and Ferghana. As proof of the links between the two regions, there are carvings of horses- the famous flying Ferghanian breed that was sent to Ancient India in thousands –and inscriptions of pilgrims who travelled to the Gandharan Buddhist sites. Thus, it should come as no surprise to learn that while building the great stucco Buddha colossi of Kuva, moulds were produced in the ateliers of Gandhara, a region famous for its stucco artists.

Gandhara includes the Northwest Frontier regions of Pakistan and eastern and north-eastern Afghanistan. This area has been a part of the colossal Buddhist corridor that connected the Bay of Bengal with Balkh through the ancient Uttarapath, the northern highroad. The road was known as the Sher Shah Suri Marg in medieval times and the Grand Trunk Road in present times.

The 300 pages of the book are filled with colourful tales brought back by the author from her extensive travels.

Most think that the Buddha moved around only within the states of Uttar Pradesh and Bihar. However there are records that point out that the Buddha may have even visited Gandhara. There is evidence that the Buddha had accurate knowledge of the relatively egalitarian Greek society living in the frontier regions of India. In a debate with a Brahmin the Buddha had wondered if a person’s worth as a person is determined by birth or by behaviour.

The glorious Gandhara area is synonymous with Buddha’s dhamma doctrine and spellbinding Gandharan art. The author walks the reader from monastery to monastery shedding bright light on remnants of millions of monastic centres, pointing out the artistic genius of anonymous craftsmen who embellished the countless places of Buddhist worship.

The Gandhara region is considered the atelier from where that rare imagery of the Buddha and bodhisattvas arose. The Buddha may have fasted in Bodhgaya but the first sculpture of the fasting Buddha is said to have been carved and etched in stone at Sikri a small village of Gandhara near Mardan. While the first stupa for the Buddha relics was erected in Balkh by merchants from Bactra. The Buddha had performed the great miracle at Sravasti in Bahraich, a remote little district in eastern India but depiction of the miracle became a favourite theme for stone cutter’s art in the villages of Kabul and Kapisa.

Gandhara is the land that gave birth to the idea of Buddha as a magnificent divine deity. And inspired by that idea Buddha images were placed in the tall niches of monasteries along the river valleys of Gandhara. This route brought flourishing pilgrim traffic along the Asian trade routes from as far as Central Asia and China. Emperor Asoka was instrumental in reducing the teachings of Buddhism to stories. It is Asoka who encouraged an artistic presentation of the Buddha in sculptures and paintings along with the use of symbols such as the lotus tree, wheel and pagoda to represent the life of the Buddha. Asoka put pillar and rock inscriptions with dhamma instructions written also in Greek.

Asoka was viceroy of Taxila during his early days when he planted shady banyan trees and provided all kinds of amenities for travellers in public places. Over the centuries seeds from those very trees have sprouted, grown, died and regrown over several centuries. Groves of old banyan trees can still be seen lining the Grand Trunk Road are reminders of the benevolence of the great Maurayan emperor. They continue to provide shelter and shade to travellers who take the same road perhaps for the same purpose of trade.

Travelling through the Buddhist corridor of Pakistan and Afghanistan, the author came across the remains of a vast number of monastic sites and excavated mounds brimming over with stupas, shrines, assembly halls, stupa courts and bath houses, images of the Buddha and bodhisattvas. Treasures found on these sites can be seen in the museums of Pakistan in Lahore, Taxila and Peshwar. Museums in Delhi, Patna and Kolkata and far beyond in St Petersburg, Rome, Milan, Paris and London also display art found in Gandhara.

Art historians describe the unique style of this art as hybrid as it combines influences from India, Greece, Rome and Persia. The mixed art style is famously called Greco-Buddhist, Greco-Roman Buddhist and Indo-Hellenistic art.

The author finds majesty in the remains of the many monasteries that have braved the fury of Nature and of time, and survived human greed. The antiquity of the monasteries stands as an undying symbol of peace and scholarship in the midst of strife and ignorance.

The Buddhist monasteries are a reminder of Asia’s splendid heritage from times when South Asia was one continous home before the region was carved into several nation states that imprison citizens with closed borders. The author concludes that this 2,000 km long Buddhist corridor has immense potential for heritage tourism in countries located along the Uttarapath in Afghanistan, Pakistan, India and Bangladesh.

Hopefully this splendid book will inspire authorities to revive their respective pride in the glorious Gandhara region and make the historic area it a little more accessible to all citizens as well. 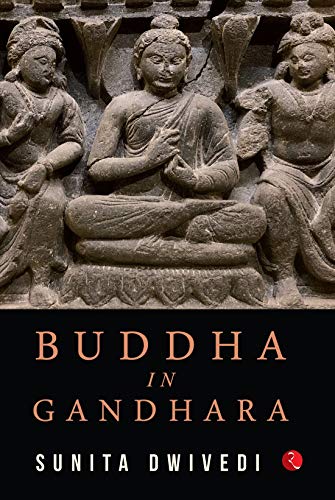 Buddha in Gandhara by Sunita Dwivedi is published by Rupa, 2020

Market Dries for the Artists of Uttam Nagar 14 hours ago

Market Dries for the Artists of Uttam Nagar

The Cinema Of Tapan Sinha - An Introduction By Amitava Nag