NEW YORK: Excerpts from a just-published book “No Comment – and Don’t Quote me on That”, a collection of political anecdotes reflecting over 40 years of reporting from the United Nations*

The United Nations, created in 1945 following the devastation caused by World War II, was mandated with one central mission: the maintenance of international peace and security.

But the 76-year-old Organization and its affiliated bodies – including the 193-member General Assembly and the 15-member Security Council— take decisions mostly by open voting, and few, by secret ballot.

But the seriousness of the UN’s far-reaching mandate has been tempered by occasional moments of levity which have rocked the Glass House by the East River— with laughter.

The UN is a rich source of anecdotes—both real and apocryphal– in which the General Assembly (UNGA), the UN’s highest policy-making body, takes center stage, along with the Security Council (UNSC) as a political sidekick.

When UN ambassadors and delegates congregate in the cavernous General Assembly hall at voting time, they have one of three options: either vote for, against, or abstain.

The most intriguing, however, is a fourth option: to be suddenly struck with an urge to rush to the toilet. The frantic attempt to leave your seat vacant — and consequently be counted as “absent”– takes place whenever the issue is politically-sensitive.

When delegates are unable to vote with their conscience– don’t want to incur the wrath of mostly Western aid donors or are taken unawares with no specific instructions from their capitals– they flee their seats.

At a lunch for reporters in his town house bordering Park Avenue in Manhattan, (“this was once owned by Gucci, now owned by Fulci”), Ambassador Francesco Paolo Fulci, an Italian envoy with a sharp sense of humor, described the fourth option as the “toilet factor” in UN voting.

And he jokingly suggested that the only way to resolve the problem is to install portable toilets in the back of the General Assembly hall so that delegates can still cast their votes while contemplating on their toilet seats. But for obvious reasons, there were no takers.

Regrettably, the voting habits at the UN were not recorded when the world body commemorated the “International Year of Sanitation” in 2008, highlighting the fact that roughly 2.6 billion people worldwide do not have access to toilets or basic sanitation.

Not surprisingly, UN delegates were excluded from that collective head count because the Secretariat never ran out of toilets. But the joke lingered on.

In most instances, the various regional groups and coalitions—including the Organization of Islamic Cooperation (OIC), the Group of 77, the Latin American and Caribbean States, the African Union (AU) and the Western European and Others (WEOG)— take decisions behind closed doors ahead of voting.

But even though the “herd mentality” continues in most UN voting, there are rare occasions of an unscheduled vote taking delegates by surprise.

In the 1970s and 80s, the 116-member Non-Aligned Movement (NAM), founded in Belgrade in 1961, was one of the largest and most powerful political coalitions at the UN led by countries such as Yugoslavia, India, Egypt, Ghana, Indonesia, Zambia, Cuba and Sri Lanka.

As a general rule, all 116 countries vote in unison on General Assembly resolutions rarely breaking ranks.

A Sri Lankan ambassador once recounted a message transmitted from his Foreign Ministry in Colombo – primarily directed at newly-arrived delegates which read— “If you are faced with an unscheduled surprise vote, and do not have any instructions from the Foreign Ministry, look to the right to see how Yugoslavia is voting and look to the left to see how India is voting. If both ambassadors are seen bolting from their seats, just follow them to the toilet”.

But NAM was a political power house in the 1970s and 80s. Still, when Sri Lankan President J.R. Jayewardene (JRJ) inherited the chairmanship in February 1978, he was skeptical of NAM which was known to be politically independent, with no strong links to either of the world’s two superpowers at that time, namely the US and the Soviet Union, who were engaged in a longstanding and bitter Cold War.

In an interview with an American news reporter, JRJ downgraded the political myth about “non-alignment” when he infamously declared there were only two “non-aligned countries” in the world: the US and the Soviet Union. All other countries, he argued, were politically aligned either with the US or the Soviets.

The quote was apparently off- the-record and not-for attribution, but the reporter couldn’t resist the temptation of running with it.

In September 1979, when JRJ handed over the chairmanship of NAM to Cuba at a summit meeting in Havana, the Western world and the mainstream media never accepted the fact that a strong pro-Soviet ally like Havana could ever be a “non-aligned” country.

As a result, right throughout Cuba’s chairmanship of NAM (1979-1983), the New York Times, perhaps as part of its editorial policy, never wavered describing NAM as a “so called Non-Aligned Movement” in every news story published in the paper. The “so called” label was dropped only when India took over the chairmanship of NAM in 1983.

When “non-alignment” was a political buzz word and NAM was in full swing, a UN diplomat once recounted the economic progress in Yugoslavia which had produced the Yugo, a small hatchback that arrived in United States in the late 1980s and early 1990s.

According to a report in the New York Times, the Yugo was said to be the first car from a Communist country to reach the American market. Equipped with front-wheel drive and a 55-horsepower engine, it sold at a base price of about $3,990, one of the cheapest in the market.

But when scores of cars kept breaking down in the streets of New York, the Yugo was dubbed “an unaligned car from a non-aligned country.” A political twist perhaps planted by the American automobile industry.

The only thing missing was a bumper sticker which should have read: “The parts falling off this car were made of the finest Yugoslav steel” (a parody of a quote once attributed to a motorist with his broken-down British-made car).

No Comment – and Don’t Quote me on That”, a collection of political anecdotes reflecting over 40 years of reporting from the United Nations*

The book is available on Amazon. 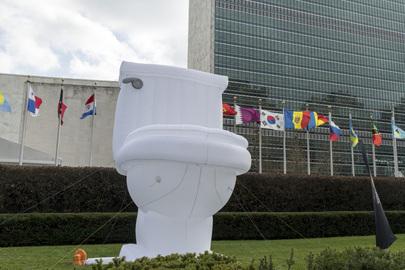 India Pakistan Ceasefire - Why? 22 minutes ago

Manual Scavenging - Not Just Inhuman But a Crime 35 minutes ago