Israel has never missed an opportunity to miss an opportunity for peace, asserts political scientist Jerome Slater in his new book Mythologies Without End.

Slater is a retired professor at the State University of New York in Buffalo and a contributor to Mondoweiss. In assessing blame for what he characterizes as a “conflict” between Israel and its regional neighbors and the Palestinian people, Slater targets numerous mythologies underlying the dominant mainstream narrative.

The purpose of the book, he says, is to demythologize that narrative.

In doing so, Slater concedes that he has done no original research. Instead, he has undertaken a review or synthesis of the existing literature.

That impressively deep dive is made obvious by a 24-page select bibliography in small-point type.

Some of the myths dispelled by Slater are not typically cited. He labels one, for example, “the myth of the diaspora,” by which he means the idea that every Jewish person can trace their ancestry to ancient Israel and that those living today outside the contemporary state constitute a diasporic population.

This myth often accompanies the claim made by both secular and religious Zionists that the Jewish people are merely reclaiming the land that once belonged to them and where they established a Jewish state until the Roman Empire expelled them following the destruction of the Second Temple in Jerusalem in 70 CE.

That this myth has taken hold has become increasingly apparent and is often used to justify Israel’s atrocities. Some give it a faux left gloss by righteously claiming that they are the true indigenous people who have simply asserted the right to reclaim their land.

Slater shows that ancient Palestine was inhabited by several different peoples, none of which were dominant.

Nothing resembling a Jewish nation-state, as we think of it today, existed then. No historical evidence supports the claim that the Romans exiled the Jews of Palestine.

The Jewish population likely dwindled due to conversions to Christianity or Islam. Judaism was a proselytizing religion at various times in history in different parts of the world, so many Jews cannot claim direct ancestry to Israel.

And finally, the descendants of the ancient Canaanites can probably make a more convincing case for being the truly indigenous population. All of which, Slater adds, has nothing to do with granting anyone the right to dispossess people from their land and homes.

The author pursues numerous other mythologies, many of which revolve around Israel’s wars and relations with Egypt, Jordan, Lebanon and Syria. Those mythologies, or propaganda claims, are by now likely familiar to readers of The Electronic Intifada, particularly Israel’s claim that the 1967 War was a war of self-defense.

At the same time, Slater avoids falling into the trap of neglecting the Palestinians. In Part 3, he establishes that the Palestinian people’s struggle has always been central to Israel’s regional conflicts and has always managed to thwart the willingness of numerous Arab governments to abandon or subsume that struggle for their own interests.

Nevertheless, a strange thing happens in the penultimate chapter of Mythologies Without End. In that chapter, Slater brings the reader up to date with the Trump administration’s peace proposal, popularly known as the “deal of the century.”

That plan would render any prospect of a contiguous Palestinian state impossible to achieve. Instead, Donald Trump proposed an archipelago of Bantustans that would ostensibly have some local autonomy.

After making a bleak assessment of the Palestinians’ prospects, Slater suggests that they might be wise to accept the Trump deal as the best hope for a Palestinian “ministate.” The author even proposes what he calls a Luxembourg solution after the landlocked European state and tax haven for multinational corporations.

Slater dismisses the idea of a single, democratic, binational state as “a utopian fantasy” and asserts that the Palestinian right of return will never amount to anything but a token gesture. The Palestinians’ weakness extends to the boycott, divestment and sanctions (BDS) movement, which, he says, has failed to bring any economic pressure on Israel, completely ignoring the way BDS has changed the dominant narrative from a political perspective.

Outside pressure alone, he writes, has never resulted in change within a targeted country, also ignoring that no one has ever said BDS is the only component of the Palestinian struggle.

In addition, Slater writes, armed resistance has also failed. He argues that the leadership of Hamas has given up on it in any event and has signaled its willingness to abandon the use of weapons (obviously, this was written before May 2021).

In effect, Slater ends up undermining his own thesis that Israel has missed numerous opportunities for peace. He even acknowledges this self-contradiction, citing a 2019 book by Chuck Freilich, Israel’s former deputy national security adviser, who describes Israel’s security situation as a “dizzying success.”

Slater concedes: “To be sure, if moral considerations are ignored, it can be argued that living by the sword has worked for Israel.”

Like many liberal Zionists, Slater is trapped by his own ethnocentric mythologies.

He insists that a Jewish state was and remains a necessity due to “murderous anti-Semitism.” He argues that Zionism held the moral high ground in 1948 due to the Holocaust.

And in another bizarre turn, he fantasizes about “what ifs.”

If only world leaders had listened to a suggestion US President Franklin Delano Roosevelt reportedly made in 1939 to pay Palestinian Arabs to leave Palestine, a cost Roosevelt reckoned would amount to only about $300 million. Slater hypothesizes that some Palestinians tied to the land would have declined the offer, but other ways could be found to remove them, preferably without coercion.

He acknowledges that would still entail an injustice but attempts to justify it by writing that a Jewish state does not have to be a democracy as we think of it today.

Slater fails to even contemplate that genuine democracies might offer safety to all persecuted people. That safety only resides in ethnocentric nationalism is the essence of Slater’s position.

For Slater, Israel was not initially a settler-colonial state but only became one after it occupied the West Bank and Gaza following the 1967 War.

Over the last seven decades, however, two major differences separate the pair. Murderous Zionism is state-sponsored, whereas murderous anti-Jewish bigotry, which has occurred rarely and mainly in Western Europe and the US, has neither been state-sponsored nor state-sanctioned.

When US-made Israeli bombs are dropped on Gaza, it’s state terrorism, not individual terrorism, resulting in another major difference – the awful death toll that has been exacted on the Palestinian and other Arab peoples.

However, the essence of the matter is that political Zionism and anti-Jewish bigotry exhibit unity by virtue of their intended outcomes: separatism and privilege based on ethnicity.

Mythologies Without End: The US, Israel and the Arab-Israeli Conflict, 1917-2020 by Jerome Slater, Oxford University Press, 2020

Rod Such is a former editor for World Book and Encarta encyclopedias. He lives in Portland, Oregon, where he is active in decolonization campaigns. 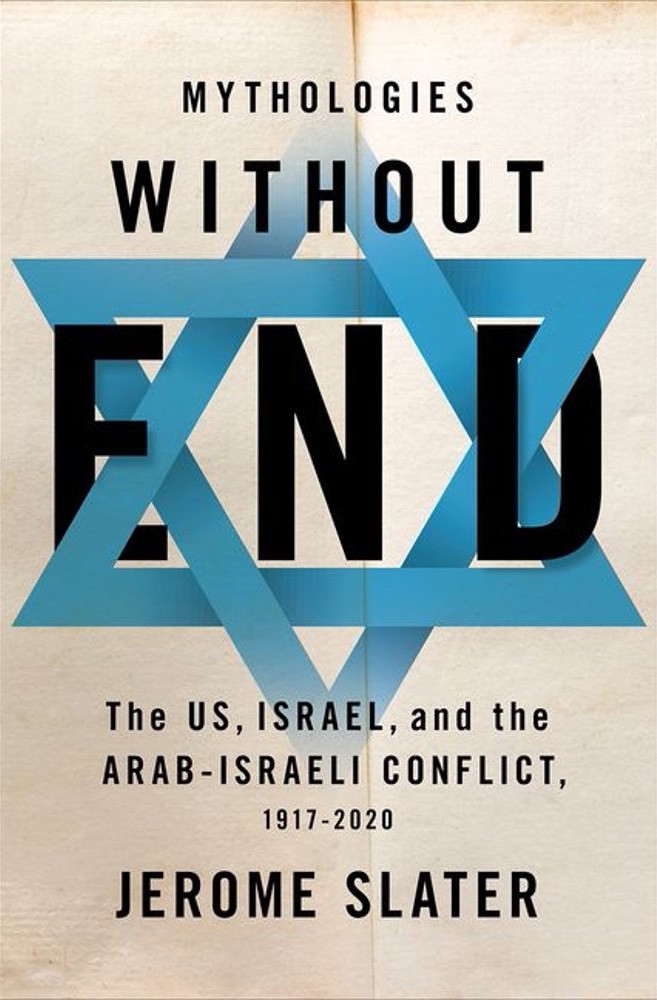