Keeping Well when Making History, and Trust and Safety are Torn Around You

NEW DELHI: “I stood outside my home seeing all the horrific videos. I couldn’t go inside as I was struck with horror on seeing videos of the brutality at Jamia being shared. I could only pray and hope not to see or hear any more grievous news,” says Adnan Kha, a journalism student at Jamia Millia Islamia.

As protests triggered by the Citizenship Amendment Act and proposed National Register of Citizens escalate across India, they confront the mostly young, student protestors with a heavy burden of psychological struggles.

“Students resisting for their cause creates one kind of distress, where even though there is a lot of resilience and a lot of strength and courage they are displaying, it takes a toll because they constantly have to be in a state of conflict,” says Prachi Akhavi.

Akhavi is one of the many psychotherapists offering free therapy and counselling to students facing psychological distress due to the current political unrest.

“However, when the community comes together it helps. On one level it is an ideological fight but on another level, it is also about a lot of emotions,” Akhavi adds.

“Students who are not directly involved are also facing distress because they are part of the student community.”

As counselling psychologist Sneha Janaki observes, “There is an environment of fear and students are constantly being threatened. The kind of atmosphere of fear that is pervasive right now is going to be very difficult to cope with later.”

“My friends and I couldn't sleep that night. We had so much fear as well as anger as to how the police could enter the campus,” Kha recalls.

Indu Chauhan, a trainee in psychoanalytic therapy at Ambedkar University adds, “The current sociopolitical climate, in which students are unable to trust their government and police authorities, and feel targeted and unsafe because of their religious identities or political opinions, in which they are robbed of trust and a sense of safety, leaving them aghast and deeply disturbed, shakes their mental health to the core.”

Akhavi, who received more than 10 calls in two days after her number was circulated on social media, agrees: “Students are feeling very unsafe in the very spaces that are supposed to be safe. They feel distant and isolated from their families if they don’t hold the same views on the issue of CAA and NRC.”

“Meanwhile, the families of many students are going with the narrative that they are students so they shouldn’t be bothered about these things. There is a lot of trivialisation, with students being equated to children,” she says. 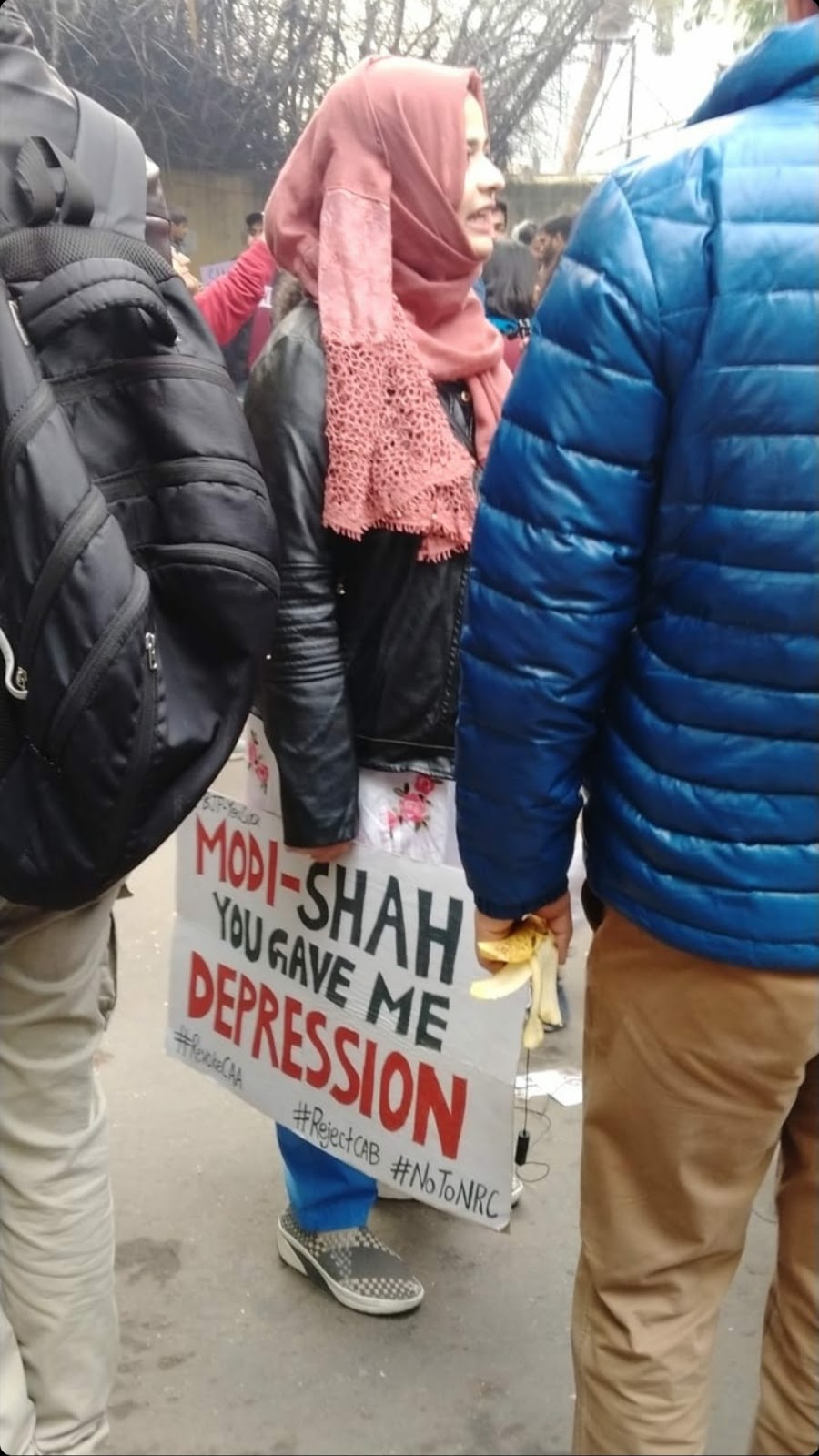 According to Akhavi, “The way this distress manifests among students is that they resort to either of two extremes: going into a very numb state where they want to cut off the source news, and not discuss it because it is very overwhelming, or the other option, that is, let that door open and work in favour of what they believe is right.”

“Right now, most of those I talked to feel very torn. If they let themselves feel all of these things then they feel flooded by it, or feel that they want to cut off.” 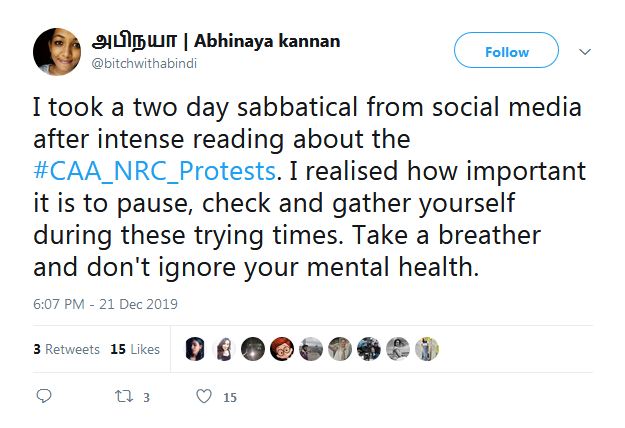 Besides those who have directly faced or witnessed police brutality while protesting, or whose friends have done, the sheer amount of video content constantly coming up online can be very distressing, and is going to play in young people’s minds for a long time to come.

To my mind, people need each other in these times because it is now that we feel most isolated, feeling things that we don’t every day, which makes us feel like the odd one out. But the fact is that the entire country is feeling that way. A sense of solidarity, community, group is very important. There need to be places where we feel safe.

According to Indu Chauhan, “Student protests provide a legitimate platform for people to come together and raise their voices. These protests become platforms where they are heard and acknowledged, and they also become places where hope is born again, and a sense of community which helps in feeling held and contained in these turbulent times.” 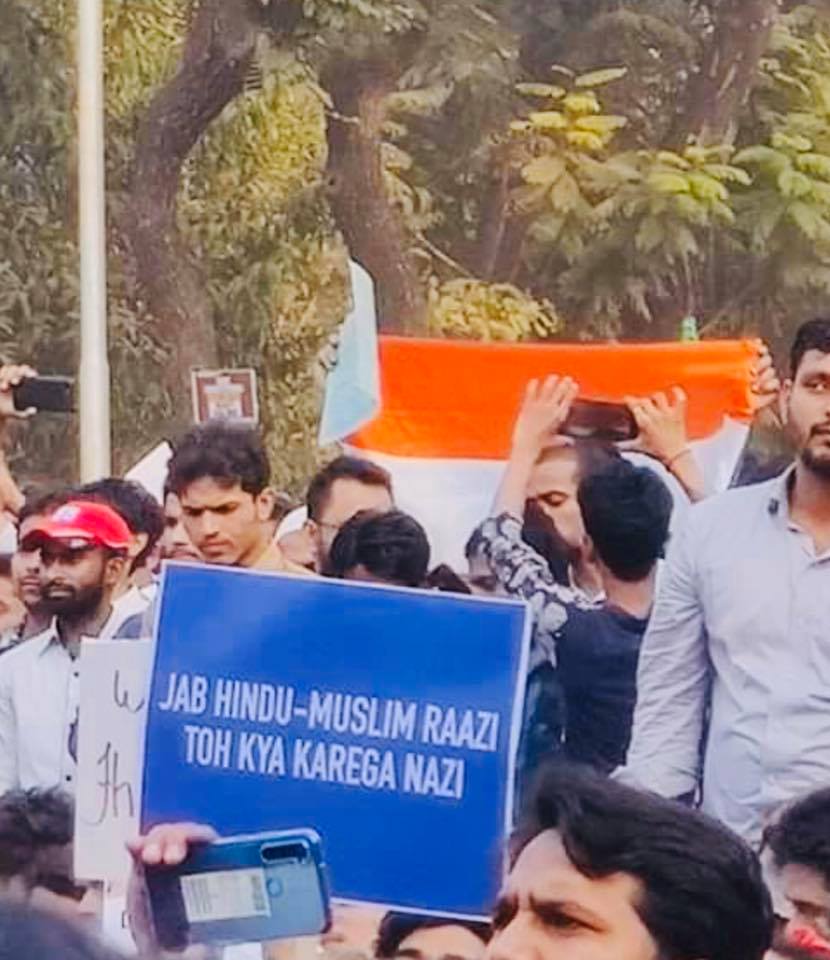 A Shaheen Bagh at Turkman Gate 4 hours ago

Soul Of A Wounded Warrior

International Consultation on the ‘Human Rights of Persons with Disability’

‘My Father Worries I Am Becoming a Desh Drohi’