Gaumatra, Airport Chaos, and the Case of the Missing Suspects: Coronavirus in India

NEW DELHI: As the number of cases that have tested positive for Covid-19 in India cross the 160 mark, questions remain on whether the country will be able to contain an outbreak that will invariably overwhelm and cripple healthcare infrastructure.

As India puts in place strict travel restrictions, effectively closing off its borders to travelers -- all foreign and even Indian nationals traveling from countries experiencing an outbreak -- videos of chaos at airports have circulated on social media. A video from New Delhi’s international airport went viral on Wednesday, as arriving passengers complained of long queues, and people could be heard shouting “shoot us” while demanding that their passports be handed back to them. 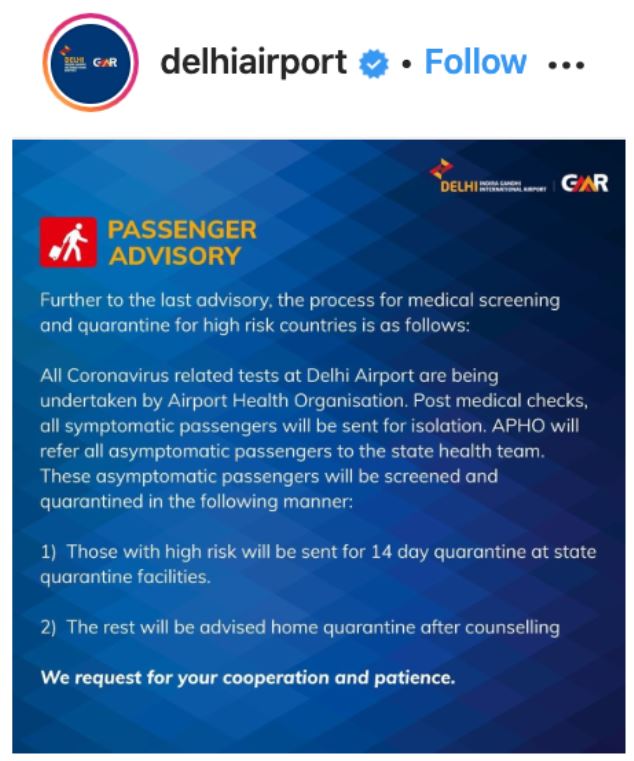 A 35 year old who had arrived in New Delhi from Sydney, Australia and admitted to Safdarjung Hospital after he complained of a headache, died by suicide after he jumped off the seventh floor of the hospital.

"It is submitted that Today information was received at PS- Safdarjung Enclave vide DD No.42A that a Corona patient has committed suicide by jumping from the SSB building. Deceased has been identified as age about 35 years male. It has been informed by Nodal Officer that he was admitted today at about 9 PM only as a suspected Corona patient from IGI Airport. He came from Sydney from Flight No. AI-301. He was staying in Sydney for last one year. He was having a headache," the hospital said in a statement.

The case of the missing suspects

At least 167 people, suspected of coronavirus, went missing in Ludhiana.

"Two teams have been tasked to find people coming from abroad, in which police have been given responsibility for finding 119 people. They have found 12 people so far and the other team is from the health department, in which they were given the responsibility to find 77 people," Dr Rajesh Bagga, the city's civil surgeon, told ANI. "17 people have been traced by the health department team. The rest of 167 people are still missing in Ludhiana," he added.

News has emerged of patients fleeing India’s isolation wards: A coronavirus suspect escaped from a government hospital’s isolation ward in Mangaluru; patients created a ruckus for better facilities in Manesar, and most infamously - a woman, whose husband tested positive for Coronavirus in Bangalore, was finally traced to her hometown of Agra, where she resisted the option of being isolated in a government facility, prompting the District Magistrate to intervene.

In Kolkata, an 18-year old who has tested positive for the virus sent authorities on a chase, tracking down the people he came in contact with after returning from the United Kingdom. The son of a bureaucrat, the student is West Bengal’s first positive coronavirus case - and admitted himself into hospital after friends in the UK told him that three people he’d attended a party with had tested positive for the virus.

The dubious cure that is cow dung and urine

A BJP MP Suman Haripriya made the news after suggesting that cow dung and cow urine could be used as a potential cure against coronavirus. “Cow dung has many benefits. I think it can kill the coronavirus. Cow urine can also be useful,” the BJP leader said.

A Hindu nationalist group even held a cow-urine drinking event in New Delhi, promoting its use to tackle the virus. A similar event was held in Kolkata, but after a civic volunteer fell ill after drinking cow’s urine, BJP activist Narayan Chatterjee who had organised the event was arrested. Chatterjee praised cow urine’s “miraculous” properties, offering it to participants.

Vegetarianism and the poultry farmer that dumped chicken and eggs

Politicians and others in India have also made appeals for people not to eat meat. Anil Vij, the Health Minister of Haryana, tweeted: “Be vegetarian.” "Do not create viruses like coronavirus, which pose a danger to humanity, by having [meat of] different kinds of animals,” he added.

A Hindu nationalist group went a step further, claiming the coronavirus had come to punish meat-eaters.

Even though there is no proven connection between consumption of poultry and coronavirus, the rumour mill has caused huge losses in the poultry industry. Union minister of animal husbandry, dairying and fisheries Giriraj Singh, estimated the loss at Rs 1,500-2,000 crore per day.

Handsome Ted and the Politics of Beauty 5 hours ago

‘Their Eyes are Sprinkled with Chilli Powder so they Won’t Sleep’: Child Labourers Trapped in COVID 6 hours ago

Analysis of Suicides Reported Since the Lockdown 6 hours ago

The Ban on TikTok and Patriarchal Control 7 hours ago

Analysis of Suicides Reported Since the Lockdown

Mindfulness and Chirping Birds: Our Mental Health and Environment

The Case for a ‘Mask Revolution’ As Hospitals Collapse