Maharashtra has reported the highest number of Covid-19 cases in the country. About half these cases have been recorded in Mumbai alone, with Pune a close second. It is essential to recognise that the world over, urban areas have been particularly susceptible to this pandemic. The personal density and proximity characteristic of urbanism seem to have paved the way for the rapid proliferation of the virus.

This is a very serious problem, especially for a country like India which is still experiencing the repercussions of rapid urbanisation. Maharashtra’s urban population, for instance, amounts to 45% of the total, and its rate of growth was one of the highest in the country at 23% annually. By 2050 India will be home to one-seventh the world’s urban population. It is essential therefore to study present cities to understand the challenges we’ll have to deal with in the near future.

Mumbai is a megacity in every sense of the term. Mega wealth exists alongside mega poverty as solace and misery intertwine to form a perhaps unique social and geographic tapestry. According to data released by Mumbai Metropolitan Regional Development Authority, the city’s workers contributed a whopping 5% of India’s GDP. They also generated about a a third of the government’s total tax revenue in 2019. Mumbai’s two ports further account for a third of India’s foreign trade.

The Mumbai Metropolitan Region is home to about 22.4 million people. More than half of these residents live in precarious settlements colloquially known as slums. These 11 million people occupy a measly 12% of the city’s total inhabitable land area. The average population density of about 20,300/km2 more than doubles or even triples in some slum settlements. Yet accurate population density data for slums remains unformalised.

Containing the pandemic in a city like Mumbai will pose some serious challenges. It is no surprise that infections are spreading rapidly in the city — it’s especially alarming that cases of Covid-19 are being detected in the slums. Areas like Dharavi have already seen multiple positive cases and the numbers are rising as the government scales up its testing. Community transmission fears loom large and containment efforts are exacerbated by the fact that slums provide some of the worst infrastructure for basic amenities in the world.

A recent unpublished study on community sanitation facilities conducted by CORO/ UNICEF in Mumbai’s M-East ward makes clear the pitiful condition of the city’s sanitation infrastructure. Of the 388 functioning community toilet blocks surveyed, comprising about 6,699 individual toilets, each seat was found to be shared by an average of 119 people.

The Swachh Bharat Mission and the World Bank prescribe a maximum ratio of 35 and 50 users per toilet seat respectively. What can physical distancing mean when each community toilet user must share their toilet seat with 118 other people every day?

Census 2011 data show further that only 33% of Mumbai’s urban residents have been provided access to piped sewer systems, with over 38% still forced to rely on septic tanks. Several tanks have been known to collapse and even explode, taking with them the lives of community toilet users as well as sanitation workers. Many public toilets in Mumbai also lack electricity and a clean water supply.

This picture shows a septic tank in Indranagar, Mankhurd that was left open by the contractor who had come to demolish the community toilet. A slurry of shit and greywater lies exposed, while families self-isolate at home just an arm’s length away from this biohazard. Such mismanagement and insensitivity are not isolated incidents.

The central government’s imposition of a harsh and unplanned lockdown has condemned the wealth-poor to severe indignity. Many people who live several hundred meters away from community toilet blocks are being forced to beg policemen and dodge their lathis simply to use the toilet.

The situation is even worse for menstruating women, as apart from the struggle to use toilets they are also being forced to cope with a scarcity of sanitary pads. The essential food packages being donated to the poor do not include sanitary pads and purchasing them from the market is becoming impossible for women deprived by the state of income-earning opportunities.

Distancing and privacy are difficult concepts to realise when five family members share a 150 square foot home. The prime minister Narendra Modi’s mantra of “social distancing” is a sick joke to anyone even superficially engaged with the ground reality. This dark humour is echoed by all branches of the state, such as when the Chief Justice of India asks, “Why wages are required when meals are being provided by the government?”

It is important to know that slum residents pay much higher rates for basic human rights such as clean water, electricity and sanitation. Most community toilets are worked on a commercial model of ‘pay and use’ wherein the typical user must cough up 50 rupees per month just to use a toilet.

Water too needs to be purchased and becomes much more expensive in times of scarcity. Some families end up paying 800 to 1,500 rupees per month for drinking water, often to water mafias that work hand in glove with the state. Slums in areas like Govandi, Mazgaon Dock and Andheri are notorious for these water mafias, which would not exist had the state fulfilled its obligation to provide clean water and sanitation services to everyone in India.

Such expenses are especially heavy when household incomes have dropped to zero, and vast numbers of people are becoming well acquainted with starvation. In the absence of credible, immediate relief, the lockdown will have a lasting and devastating impact on India’s non-salaried majority — a second severe blow after the 2016 currency swap.

It is well documented for instance that urban non-salaried workers also include children, who are employed in sectors such as construction, waste picking, sewage and garbage cleaning, food processing, textiles and embroidery, home based industries and auto garages. Many workers engaged in such precarious work have no families and no homes in the city. There are countless such people, children without homes, and pavement dwellers who have nowhere to go.

Meanwhile a sliver of urban Indians flaunt the privilege of drudgery and boredom at home.

Yet Mumbai’s slum communities have not lost heart. Countless Mahila Mandals, Youth Groups, Self Help Groups and Community Based Organisations involved in managing community toilets have sprung into action during the crisis. Many have successfully reached out to vulnerable social groups such as senior citizens, households headed by women, or people with disabilities.

Community kitchens supplying daily food services including the distribution of rations have been developed. Some organisations have also begun providing basic infrastructure related services such as in the arena of community sanitation. Their efforts in helping communities cope with Covid-19 and the lockdown are pictured below.

Marking squares, managing crowds, distributing masks, teaching handwashing with soap, disinfecting areas and distributing soaps are some of the services these organisations have stepped up to provide. Some are also using the Mumbai Municipal Corporation’s services to access and spray disinfectants inside community toilet blocks. Such awareness and quick adoption of preventive measures show the tremendous potential of developing robust welfare mechanisms for and by communities resident in slums.

Community involvement in disaster management and welfare provision will become indispensable in future as India’s slum population is expected to double by 2045. Therefore, the state must devise a policy response beyond non-interference and the bare minimum of institutional cooperation, if India is ever to fill the glaring gaps in its welfare and crisis management systems. 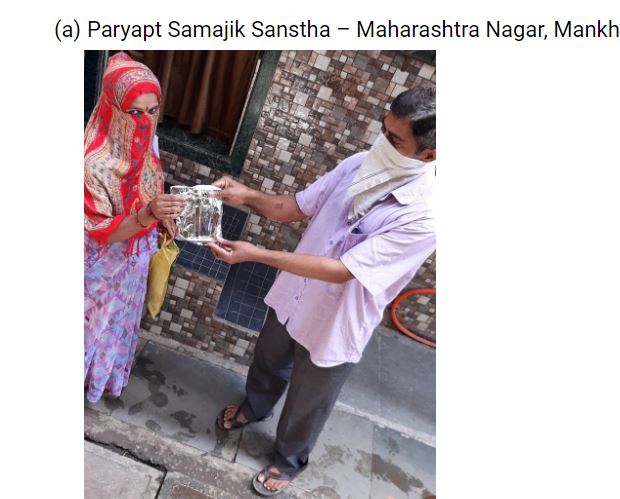 Management and Sanitization of Community Toilets organised by CBOs 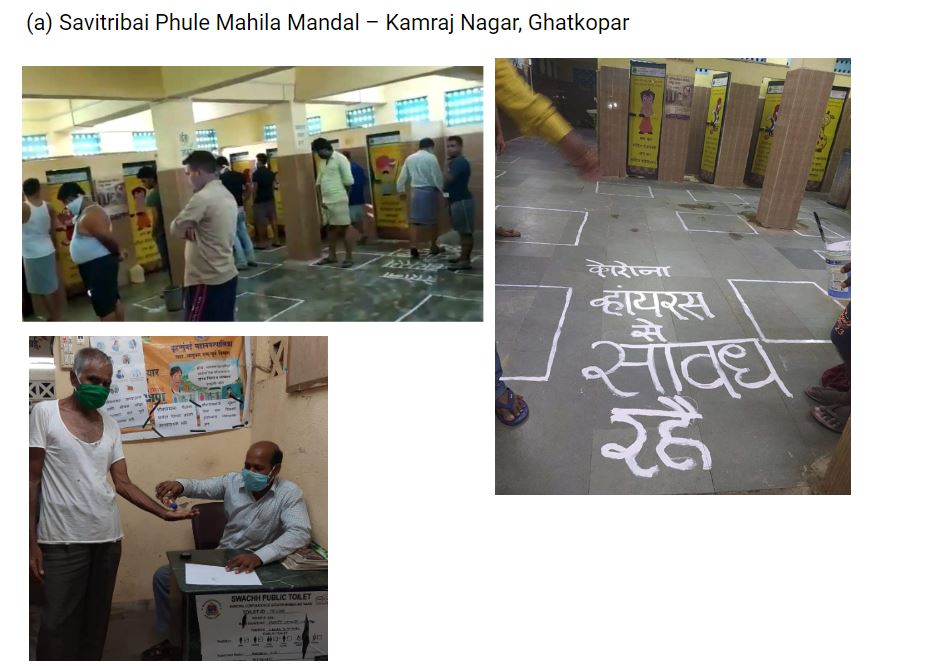 Kaustubh Jagtap from Azim Premji University has worked extensively across rural and urban India in the development sector.