Lives and Livelihoods of Informalised Workers in 4 Indian Cities

Citymakers are the urban working poor, employed in informalised jobs and resident in informalised settlements and slums. These workers constitute a significant share of the world urban workforce, and contribute to national economies in multiple ways.

In India they constitute an estimated 80% of the urban workforce. In almost all countries they have witnessed a huge economic shock due to COVID19 and related lockdowns.

Informalised workers have no job contracts, no regular work, are often employed casually and do not have social or public safety-nets to support them and their families during emergencies.

To understand the impact of the lockdown on these urban workers in India, the Impact Policy Research Institute based in Delhi conducted a telephone survey of 3,121 citymakers across 50 Indian cities and towns last May.

In the four megacities surveyed (Delhi, Mumbai, Chennai and Kolkata) we saw a grim picture and little hope of a return to normalcy in the coming months.

As economies limp towards recovery, it is these families who are bearing the major brunt.

Life in a Megacity

We interviewed 1,194 citymakers in Delhi, Kolkata, Mumbai and Chennai. Around half the respondents had not been provided an education beyond middle school. Half were migrant workers: 64% in Mumbai and 37% in Kolkata.

Around 44% were staying in rented accommodation, reflective of the vulnerable situation of migrant workers in these cities.

Only 14% of those surveyed were able to earn an income from home.

In all four cities we found that 6 out of 10 families had spent their household savings on medical care.

In Delhi and Kolkata, 3 out of 4 families with children had enrolled them in government schools; in Chennai and Mumbai the proportion was half.

These children’s education is a matter of urgency: without access to online education facilities they will likely be removed from school and into wage-work to supplement their family’s income.

Congestion was high in these homes, with an average of three people living in a single room, making disease distancing impossible to maintain.

Almost 7 out of 10 respondents were working in the informalised sector: daily wage work, small trades or businesses, or as temporary workers without any tenure or security.

In Mumbai and Chennai a surprisingly large proportion were engaged in salaried jobs – 58% and 48% – and somewhat less in Kolkata 32% and Delhi 29%. But over half of these salaried workers had been hired temporarily or on contract, meaning their incomes were just as precarious. 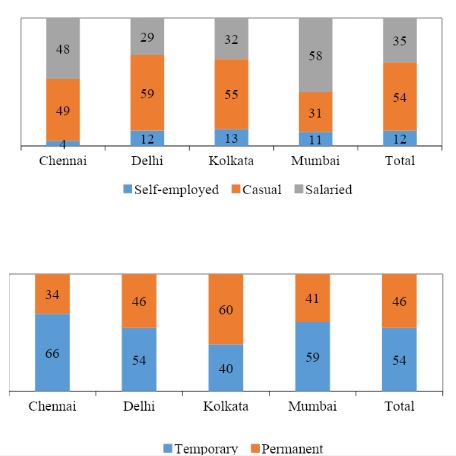 Job losses overall were highest in Delhi (62%) followed by Kolkata and Mumbai (around half), and lowest in Chennai (29%). The low job losses in Chennai can be attributed to the higher proportion of self-employed and salaried workers, versus casual workers in the other megacities.

Essentially, job losses were highest among casual labourers and the self-employed across these cities.

When asked why they were unemployed or had lost their job/ livelihood, 31% cited their inability to visit their workplace and 37% the closure of their places of work.

In Mumbai and Chennai 1 in 4 respondents had lost their temporary or contract jobs, while in Kolkata the majority of them could not visit their workplaces because they lived very far away.

These factors have dealt a massive shock to the livelihoods and earnings of these workers and their families. For example, the inability to earn during the lockdown has left 53% of them unable to pay rent.

More than half the respondents surveyed were mentally stressed or not in a good state of mind due to loss of job, and were anxious and apprehensive about how they would feed their families and pay bills/ rent if the current situation continues.

With 88% of respondents dependent on household income, savings, and financial help from relatives, friends etc. to meet expenses related to medical care, even temporary job loss has added to their anxieties.

Any kind of health emergency, including COVID19, would exacerbate these families’ plight.

Quite understandably, over 94% of respondents in the megacities wanted to return to work, and almost three-fourths said they would join the same job they had before the lockdown, if possible.

However, the resumption of economic activities or absorption of these workers in newer activities would significantly depend on the nature and type of policies used to jumpstart urban economies – such as by boosting local businesses, especially the small and micro enterprises that are hardest hit.

Similar to our findings, the CMIE survey also revealed that 21 million people have rejoined their employment or jobs in the month of May as governments have started to ease the lockdown.

The reversal of job loss – if not incomes – has been achieved and the employment rate is moving towards pre-lockdown levels. Almost two-thirds of the jobs added (14.4 million) were of small traders and wage labourers.

Many citymakers have in fact left the cities, forced to return to their hometowns, and those who stayed on are facing several difficulties.

There is an urgent need to prepare policies for the short and long term for these workers’ livelihood security. At least they should be provided with basic income security at the time of such exigencies.

In light of the evidence from the IMPRI study, it becomes important that the stringent Aadhaar requirements for accessing different schemes must be relaxed for at least the next six months.

Another option could be a job assurance programme in urban areas that would give needy households livelihood security in times of crisis.

Further, for everyone to be vigilant about the spread of COVID19, digital literacy for children belonging to poor families, and money transfers through digital payment of welfare schemes, poor households should be provided with an Android phone either for free or at a subsidised rate through PDS shops. The private sector should also come forward (under the CSR component) and provide free SIM and data coupons to households below the poverty line.

This is an opportune time to ensure digital literacy among the people. In addition, there is an urgent need to prepare a dynamic database of citymakers to devise appropriate mitigating policies for them, before, during and after any kind of emergency situations.