Understanding addiction and our unwillingness to reform

BHUBANESWAR: “I am sober but I am miserable. It gave me a purpose in life. I would wait for the sun to rise so I could go out and get my next fix.”

Ajay, 30, started taking heroin when worked as a construction labourer in Surat. With other workers from Odisha he shared dingy, congested rooms where they would come back to sleep after 15 hour shifts.

The work was tedious, the loneliness overwhelming, the wages were kept low and the only escape was getting high. “I thought of getting admitted in the de-addiction centre during the lockdown, when I couldn't use for some days. It made me irritable and violent. I felt my own children weren’t safe around me”.

He says the doctor told him before letting him leave that an addict remains an addict: either using or recovering, but never cured. Fear of relapse chased him like a shadow..

Chandan, 14, started using dendrite when he was eight. He worked hard as a ragpicker by day, doing odd jobs at times to earn money for the next high. “I have to go work and can never keep watch on him,” says his mother. “I will lose him one day like I lost his father to drugs”.

Chandan showed me the spot where he would meet his friends. A garbage dump with sewage flowing by its side, and the stench of dead dogs. The group of boys formed a bond as they acknowledged each other’s vulnerability, sharing the tragedy of their broken childhoods, and later sharing needles.

Only a few miles away from the dumpyard was a luxury rehab centre which charges clients 75,000 rupees per month. Addicts from rich families are sent there for recovery.

After six months of staying clean, on some random unfortunate evening some would be discovered in the same dumpyard, having overdosed and died while getting high with the ragpickers.

Alok, 28, was studying for entrance exams to join the police force. Despite intensive hard work he failed to get in, and was without a job for a long while. There weren’t any jobs, but there was heroin. He sold girders and stones being used to renovate his house, his grandmother’s nose ring, his daughter’s clothes.

“He wasn't himself,” says his wife. “Every morning we would wake to find the washing machine missing, or the TV missing. He sold everything.” At one point his family forcibly put him in rehab, but like most private clinics it was run illegally by quacks.

There were no qualified psychiatrists or psychologists. There was no medication or support group. They made him starve, beat him and kept him chained up when he suffered from withdrawal. They didn’t let him talk to anyone for three weeks.

Cockroaches would swarm over his chest where he lay, collapsed on the floor, trembling and sweating from withdrawal. He says most patients returned from the experience angry and frustrated, needing the substance more than ever. Alok did too.

The medications provided to undo addiction usually work by negating the euphoria one gets from using drugs, or by making one averse to the substance. But for many, habits don’t break. Friend circles don’t change. When you work at the same place and pass through the same lanes where you used before, you are likely to return.

The Narcotic Drugs and Psychotropic Substances Act of 1985 doesn’t recognise addiction as a public health concern. It doesn’t differentiate between recreational drug use, and addiction or substance abuse.

While binge users may temporarily become dependent on a substance they eventually can quit, whereas addiction forms an inherent pathological relationship with the substance which is beyond the user’s control.

The word withdrawal doesn’t appear even once in the act. The motive of the law seems to be to criminalise drug use through stigma and an orthodox moral stand, as opposed to recognising the helplessness of addicts and focusing on their rehabilitation.

While support group systems of rehabilitation where drug addicts help each other stay clean have been found effective, such systems are unavailable at public facilities in India, where patients of addiction are considered “antisocial elements” in a society that has itself pushed them to the margins.

If their livelihoods and communities were secured, they would not have to resort to other ways to feel like a person.

There is also the question of who uses what substance, and who frames the laws. “The reason some drugs are legal and others are not has nothing to do with science or health, and everything to do with who uses it,” says Ethan Nadelmann, founder of the Drug Policy Alliance based in New York City.

“If the principal smokers of cocaine were affluent older white men and the principal users of Viagra were young black men, cocaine would be easy to get with a prescription from your doctor and Viagra would land you 5-10 years behind bars.”

After his return from the rehab clinic run by quacks, Alok took his life one day after his family locked him inside a room for turning violent. He wasn’t a law and order problem, but a person with a complex biopsychosocial condition, poorly understood by others. 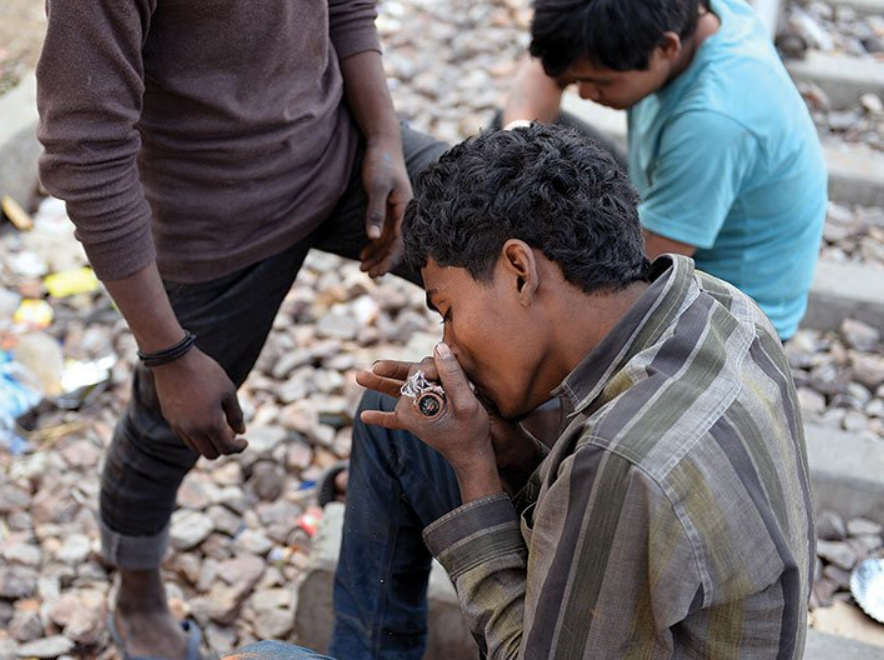