They are asking migrant workers to join in their movement

Apprehending that the Union government might use the prevailing grim scenario to suppress the farmers’ agitation that recently completed 150 days at the gates of Delhi, farmer organisations have taken it upon themselves to provide maximum assistance to Covid-19 patients and their families in and around the national capital.

“We are well aware of how the government used Covid-19 as a shield to target the agitation at Shaheen Bagh and elsewhere against the Citizenship Amendment Act and National Register of Citizens. We apprehend it will use the same tactics against agitating farmers,” said Narayan Dutt of Inquilabi Kendra Punjab. “To begin with, the organisations at the forefront of the movement have decided to adopt 40 villages around the protest sites.”

“The first thing being done is to ensure that no member of the Covid-hit families goes hungry. For this there is a move to deliver food packets. Delivery has started from the Ghazipur protest site and will begin at Tikri and Singhu border sites as well from Tuesday onwards. It will start with a few thousand packets and will be scaled up as per the need. There is no dearth of food grains and vegetables with the agitating farmers, and these will be put to use to help those in need,” said Manik Goyal, who is engaged in co-ordination with various groups.

He further disclosed, “The farmer movement has the support of some very well qualified doctors. Teams of such doctors have been constituted and they will spread out among villages around the protest sites to provide all medical assistance to people hit by the outbreak.”

The farmers also plan to use the outreach programme to further “expose the failures of the central government” on the health and economic front. Already messages are being spread that just as common folk have been compelled to run for pillar to post for basic things like hospital admission, oxygen and antiviral drugs, the same will be the case with foodgrains if the country does not rise against the “anti people farm laws”.

“All our Twitter handles and other social media platforms will be used to help people in need of oxygen, hospital beds, medicines, and any other requirement of Covid hit people and their families. With a very large follower base, we will be able to amplify the needs of people in different localities on a bigger scale, and this will be followed up with providing assistance. The Samyukt Kisan Morcha [United Farmers Front] is going ahead with this initiative on a war footing,” Goyal told The Citizen.

Having harvested their wheat crop the region’s farmers are now heading back to the protest sites in large numbers, particularly from Punjab, Haryana and western Uttar Pradesh. Activists in these states have launched a fresh programme to garner more support among those still in the villages to manage fodder and other post harvest tasks.

“We are holding meetings in every village to motivate more and more people to participate in the agitation in coming days. Street plays are being staged in the villages to convey how these farm laws would spell the death of Indian agriculture. A local fund collection drive is also on. People are also being made aware of Covid protocols, of distancing, sanitising and the need for immunisation,” said Kanwaljit Khanna of Jagraon, Punjab, who has been among those instrumental in organising the protests from the beginning.

The farmers have been saying that in the last five months of their agitation there have been no Covid cases reported from the protest sites. They are vexed by the attempts being made by right wing groups to accuse them of spreading the disease, or hindering the transport of oxygen.

Farmer groups have taken to the social media in a big way to counter the propaganda against them with regard to oxygen supply. “When an oxygen tanker inadvertently entered a lane where the farmers were demonstrating, they not only immediately cleared the road but made sure the tanker reached its destination safely and well in time,” said Manik Goyal. A video of the episode went viral, much to the chagrin of groups out to discredit the farmers.

They plan to organise a national level convention on May 10. Farmer leaders have been saying they will resist every move by the government to target their peaceful movement in the name of Covid-19. They have stated that the disease was very much in place when they moved to the borders of Delhi, and that the government and the Bharatiya Janata Party have no leg to stand on since they flouted all Covid protocols during the poll campaign in West Bengal, and have failed to contain the second wave of the epidemic.

According to a statement issued by the Samyukta Kisan Morcha, the farmer organisations are taking steps to provide masks, oxymeters and thermometers at all the protest sites, besides organising vaccination camps. They have promised to extend all support to the local administration in containing the spread of Corona.

Meanwhile, farmers are also reaching out to the migrant labour once again attempting to go back to their villages under fear of lockdown and further restrictions. They are offering food and shelter to these migrant labourers at the protest sites, asking them to join in their movement against the farm laws promulgated by Parliament last year.

They say they are prepared for the long haul. 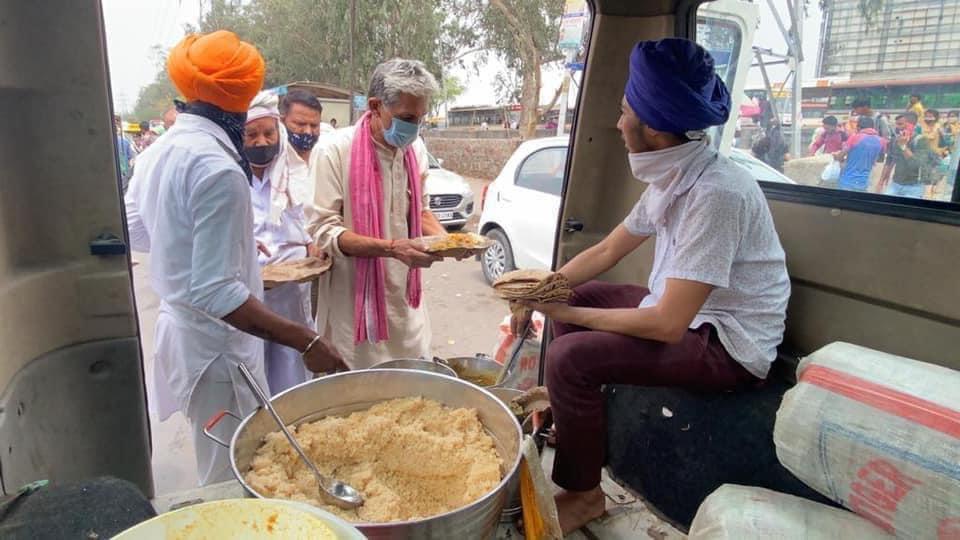